For as long as there is society there will be a past that must be reckoned with, said Dr Mbongiseni Buthelezi, head of the Public Affairs Research Institute, at the Nelson Mandela Foundation on 4 October 2018.

Buthelezi was speaking at the Foundation’s launch of an online archival collection of the hundreds of documents that were used to compile a semi-autobiographical account of Nelson Mandela’s years as South African President. Simultaneously, the Foundation launched a report on archival activism in South Africa and marked the 20th anniversary of the Truth & Reconciliation Commission report being handed to Mandela, who was then president.

Archives are a starting point for critical conversations about the past and its effect on the present and the future, Buthelezi said. He was speaking after a dialogue that explored the after-effects of the Truth & Reconciliation Commission and its recommendations.

The book Dare Not Linger: The Presidential Years is the account of Mandela’s years as South Africa’s first democratically elected President. It was compiled by a team led by Joel Netshitenzhe and Tony Trew, who both worked in Mandela’s presidential office, and written by acclaimed author Mandla Langa. The archival collection launched on 4 October comprises hundreds of documents, from Mandela’s unfinished personal account of his tenure as President, to records from Parliament, the African National Congress and the media, and accounts and memories from those who worked closely with him.

“The Nelson Mandela Foundation hopes that this online archive resource will draw people not only into the contents of its own archives, but encourage people to explore the riches preserved in archives and libraries across the country,” said Razia Saleh, Senior Archivist at the Foundation. 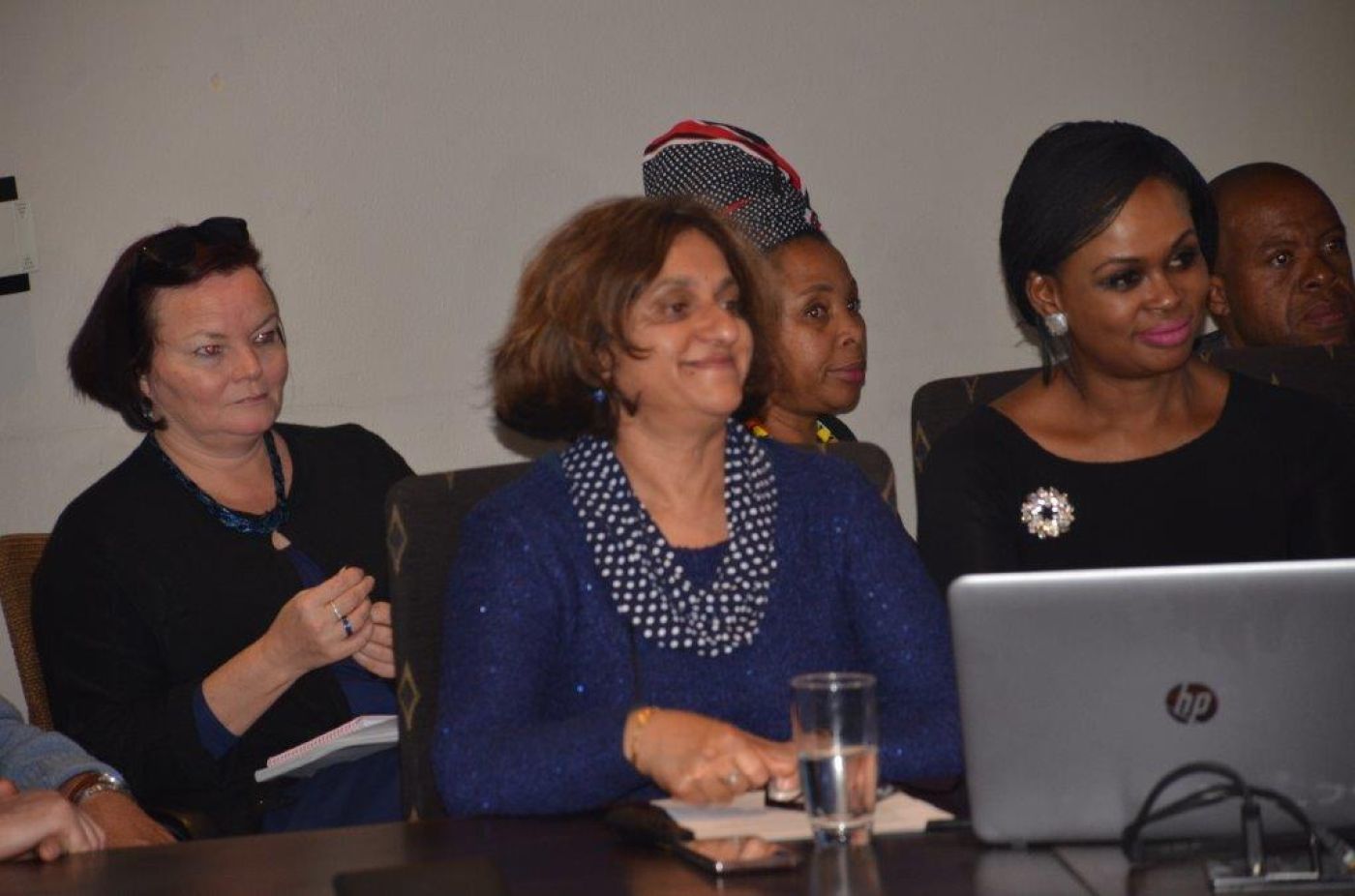 Saleh said the Foundation hopes the archive will “remind us that history can’t be told or decided once and for all, but needs constant refreshing by checking our understanding of it against traces in documents and in the memories of those who lived it and helped make it”.

The online archive has also been optimised for access via cellphones. Its main text is divided into seven themes containing 19 sections. The archive has been set up to denote three “voices” – Mandela’s own, those of people with whom he worked or engaged closely, and a narrative voice that weaves the accounts together.

Trew, who attended the launch, said the archive project was premised on the idea of opening up an archive in a way that would be accessible to a layperson.

Sorting through the wealth of documents had revealed insights into Mandela’s character that he had not previously had, Trew said. “Every now and then you come across things that either enlarge, or unsettle, your understanding of history.” 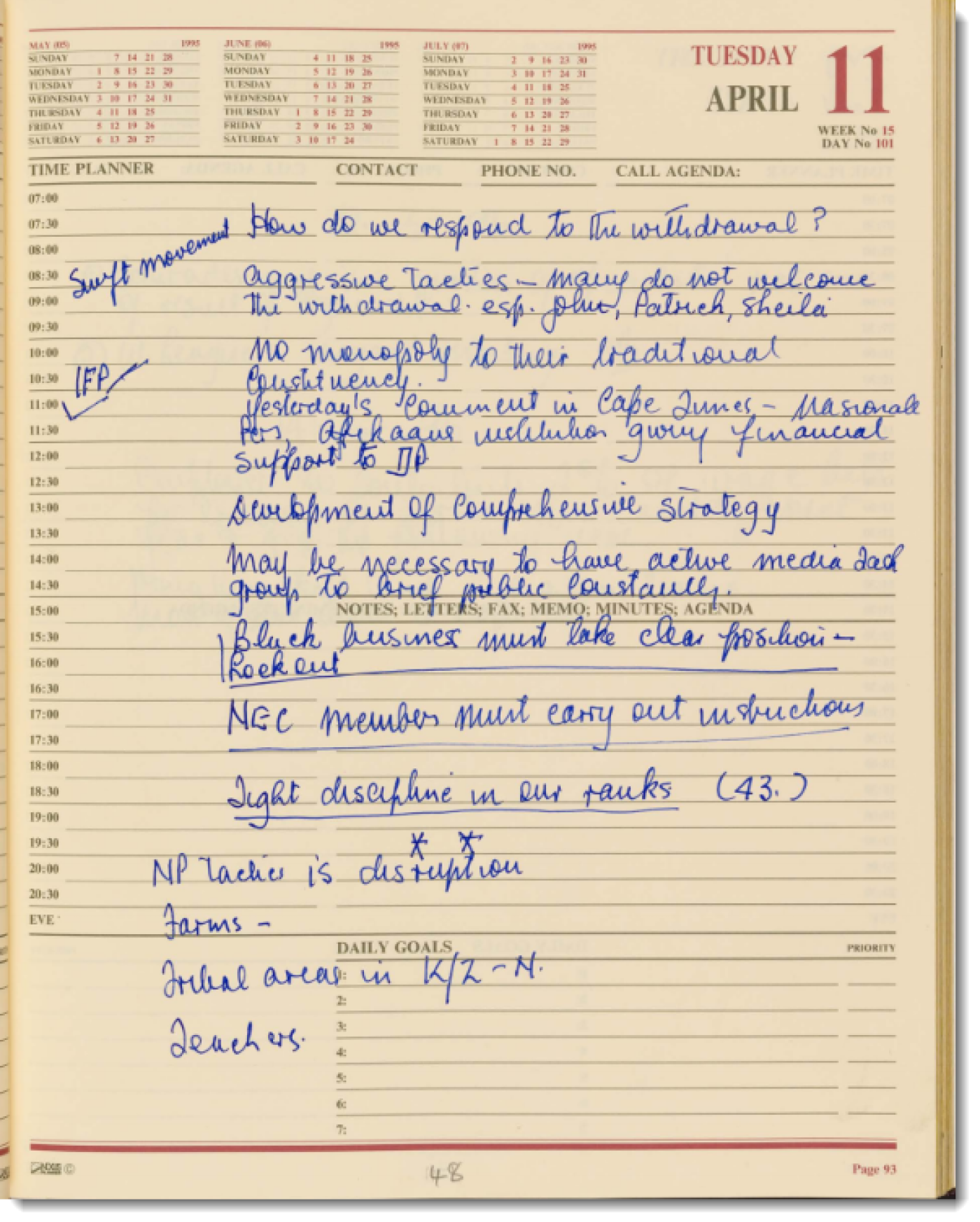 Mandela's diaries form some of the hundreds of documents that populate a newly launched online archive of the papers that were used to compile and write The Presidential Years, an account of Nelson Mandela's time as South Africa's first democratically elected president.

Foundation Trustee Carolyn Hamilton, a scholar at the University of Cape Town, said it is critical that all archives – official and not – are publicly accessible.

“Those who set up archives say what goes into them. Archival activists collect the things that the people in power don’t want included in official archives,” she said. “We need to insist the official record is always open to contestation.

“Open archives are preconditions for dialogue; they are the bulwark against those in power setting the narrative.”

That is why the Foundation decided to make the documents used in writing The Presidential Years available online, she said.

The report A Ground of Struggle: Four Decades of Archival Activism in South Africa, which was also launched on 4 October, was commissioned by the Atlantic Philanthropies in 2015. It is intended as a contribution to assessing the scope, impact and contexts of activist archiving in post-1994 South Africa.

Foundation researcher Patronella Nqaba, who chaired the proceedings, said the archival activism report “represents the little spaces in which people do their part” to ensure South Africa flourishes politically and in other ways.

Buthelezi said no story or history is ever complete, and that the report is a starting place, just as the three “Gupta Leaks” hard drives recently received into evidence by the Zondo Commission of Inquiry into State Capture are a “sort of archive” through which South Africans have started to revise their accounts of the previous decade.

Just as during the 1990s apartheid loomed large in South Africans’ minds as “something that had to be reckoned with”, so state capture now looms large in South Africans’ minds, Buthelezi said. But space has to be created for all pasts, shorter and longer, to be reckoned with. As Chandré Gould said: “We are starting to have conversations that remained stuck for a very long time.”

The evening’s events were co-hosted by the Foundation and the Hanns Seidel Foundation.