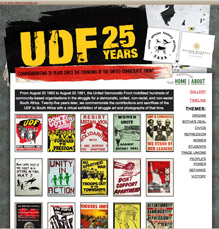 Aug 20, 2008 – On this day in 1983, the United Democratic Front was formed to mobilise South Africans in the struggle for a democratic, united, non-racial and non-sexist country.

The UDF drew together hundreds of organisations representing “freedom-loving people” and became a vital link with the banned ANC.

Twenty-five years later, the Nelson Mandela Foundation and the South African History Archive (SAHA)  have developed a virtual exhibition of struggle art and photographs of that time.

The exhibition uses archival materials to explore the vital role the UDF played in bringing democracy to South Africa, and commemorates the sacrifices made by members of the organisation, which was disbanded on August 20, 1991.

This graphic display vividly recalls the repressive era in which the UDF was formed but also serves as inspiration that change is possible even under the most difficult conditions.

Says Judy Seidman, curator of the SAHA poster collection, “The history of the UDF is told here through the posters, photos, personal accounts and memories. Today, 25 years after it was launched, this story has much to teach us: of individual heroism and sacrifice, of community mobilisation, of what we have won in a united, democratic and free South Africa.”

Visitors to the website can access images of posters used in the UDF’s campaigns and read more about their purpose and context. They can also leave a comment on each poster. SAHA would like the public to get involved by contributing stories of their experiences of the UDF or suggesting any other materials of interest to expand the exhibition in the future.

Information accompanying the posters covers the following themes: origins of the UDF, Botha’s deal, civics, repression, women, students, trade unions, people’s power, defiance, and victory. These record the political struggles and events of the 1980s, often in the direct words of those involved.

Razia Saleh, an archivist in the Foundation’s Centre of Memory who helped to put the virtual exhibition together, says, “The UDF played an important role in the 80s in uniting different groups of people in common opposition to apartheid – we think it’s an important part of our history.”