The climbers celebrate their achievement

Heroes come in many guises, and on the evening of 20 July a band of exhausted, unkempt but victorious group of people were welcomed home at OR Tambo International Airport by a singing, dancing and ululating crowd.

These Trek4Mandela heroes had just summited Mount Kilimanjaro, the highest peak in Africa, to raise funds and awareness for the charity Caring4Girls. Trek4Mandela is one of the hundreds of activities that take place all over the globe to honour and advance the legacy of Nelson Mandela.

Caring4Girls was founded by Richard Mabaso after he overheard his mother and niece discussing the embarrassment and anxiety that menstruation causes for young women. He decided then that no girl’s dignity and opportunities should be encumbered by the natural functions of her body.

Girls, especially those who are underprivileged or from rural areas, miss many days of school a year because they do not have access to sanitary towels. Caring4Girls has partnered with the Nelson Mandela Foundation to create Trek4Mandela, an initiative to help these young women to stay in school by providing the sanitary towels that they need.

Sibusiso (Simba) Vilane, renowned climber and the first black African to conquer the “Three Poles Challenge” (North Pole, South Pole and Mount Everest), led the climbers to the top of Kilimanjaro. He explained the idea behind Trek4Mandela, saying, “I have a giving heart but I can’t donate a million rand. [But] I can use my natural talents.”

By using his talents and inspiring others to do the same, he has helped create an event that can raise the awareness and funds that are needed to help girls to stay in school, and to preserve their dignity.

The goal of Trek4Mandela this year was to raise enough funds and collect enough sanitary towels to help 270 000 young women. “For me personally,” said Vilane, “standing on the summit of the mountain won't mean anything if we don't reach the target, which is helping or actually serving 270 000 girls this year.

“That, for me, was the ultimate. If we achieve that then it is double-summits, because quite practically we stood up there but if we don't reach the target I will be hugely disappointed. For me, it can never be a success [otherwise].”

The summiting of Mount Kilimanjaro, as well as being a challenge that will help Caring4Girls, is also a massive personal accomplishment for the climbers. Vilane said that although he had been the expedition leader, “they [the climbers] climbed each step of the way themselves to the summit and they deserve all the accolades”.

Thulani Nzima, CEO of South African Tourism, expressed the dual goal that the climbers had realised by climbing Kilimanjaro: “When you're up there, yes, you are doing it for the girls, but you then end up saying, I have to do this for myself.”

The climbers were welcomed home by excited crowds

Upon being asked what the voice in his head was saying when he thought he couldn't go any further, he answered: “At the point of summit, at Uhuru Peak, I actually ended up counting my steps using Madiba's years.

“For me, it's a very special deed that one would have to do,” said Hatang, “but what made it more special was the cause. All of us know that for as long as there are girls who cannot go to school, who cannot afford to go to school, because of a lack of something that we take for granted, that is the simple thing of sanitary towels, we can never relax. So, I think all of us were encouraged by the deeds of South Africans who donated and those who participated.”

“I really thank them [the climbers] again so profoundly and dearly for taking the action,” said Vilane, “not necessarily for promoting Trek4Mandela and Caring4Girls 2015, but [for] practically being there on the mountain, on an iconic mountain that we use to raise awareness [for something] that is at the moment focused around Africa, but is a global challenge and a global problem.

“They [the climbers] worked really really hard to make sure that girls are in school.”

Added Vilane: “I heard some of them saying, when it got to a point of giving up, they said, ‘The reason why I can't give up is because I'm doing this for the girl child.’”

Mondli Gungubele, mayor of Ekurhuleni, who also spoke at the homecoming proceedings alongside the successful summiteers, reminded everyone that this initiative is not just about keeping girls in school, but also about their dignity, saying, “To say sanitary towels [are important] for girls is to say that their dignity must never [break down] … There must be no human beings who are marginalised because they have got no resources, because they belong to poor families.”

He went on to say that the climbers were making the whole world conscious of this fact: “They use their own bodies, they endure, they torture themselves …” he said, “Enduring together in pursuit of the South African dream.”

Gungubele added: “We love you, guys.”

And Mabaso told us all: “We should remind ourselves that this is a massive achievement for everyone, but that it should not stop here, and that we should continue to focus on the goal of providing sanitary towels for girls.”

People aniticipating the return of the climbers 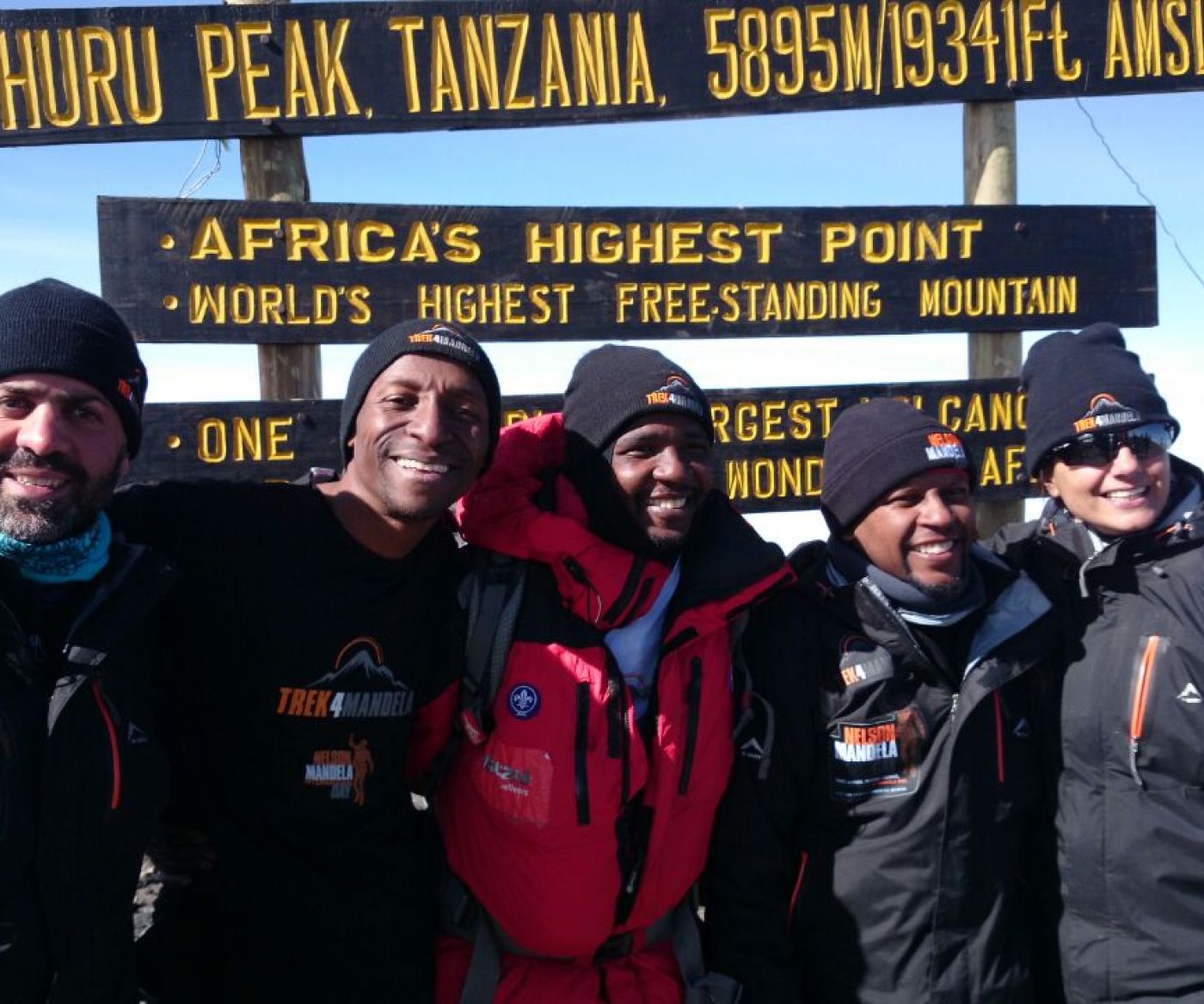 Images from the annual Trek4Mandela ascent of Kilimanjaro, the highest peak in Africa.
Continue reading...