The first time Desmond Tutu saw Nelson Mandela in the flesh was in the early 1950s when the “tall, dignified” political leader judged a debating contest in Johannesburg.

The second time was almost forty years later at Cape Town’s City Hall. They had both become icons of the struggle to end South Africa’s racist political system. Tutu was a Nobel Peace Laureate and an Archbishop of the Anglican Church. Mandela was a world famous political prisoner who, only hours before, had left prison after serving more than 27 years. 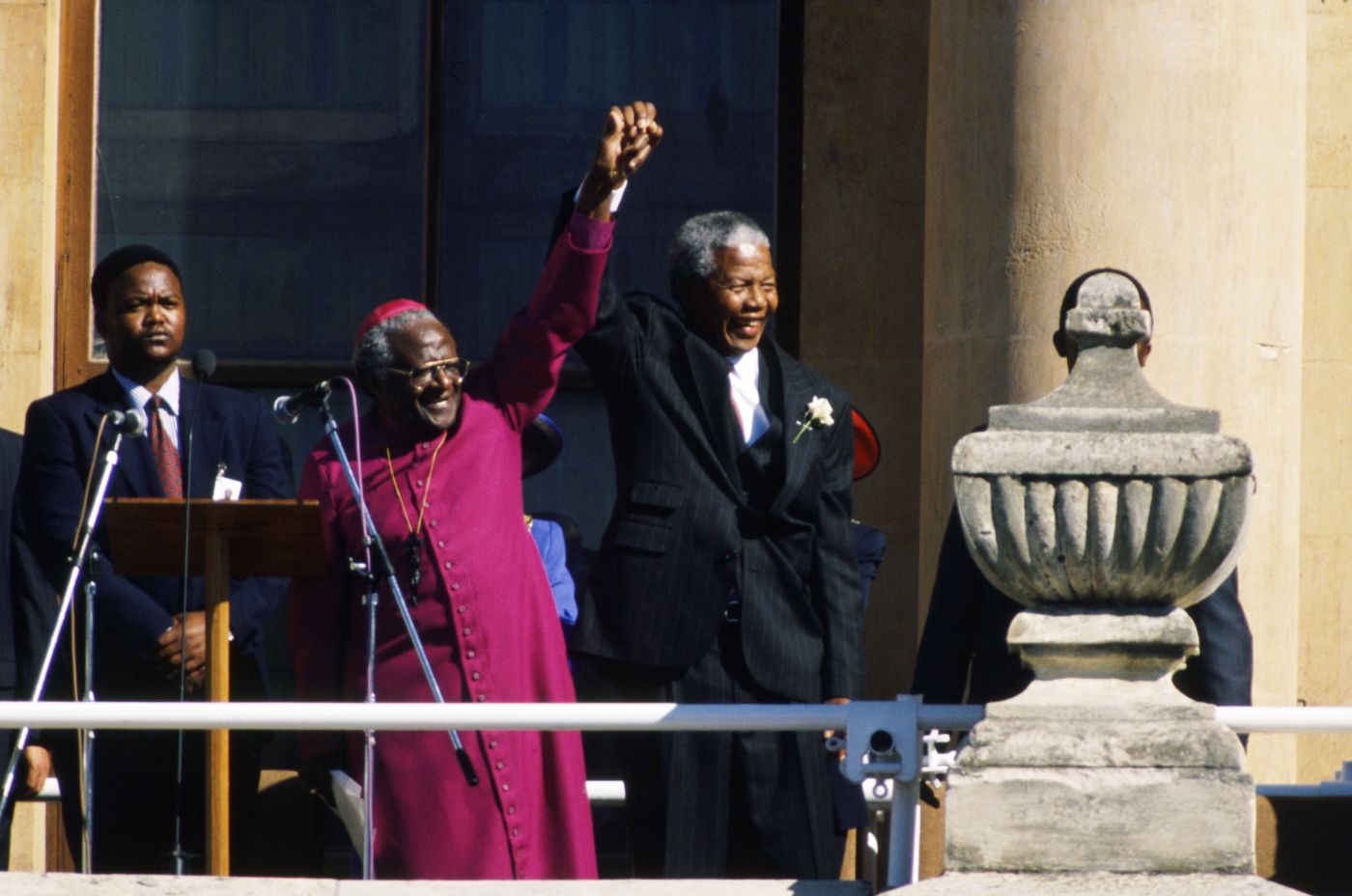 Tutu was in his 20s and training to be a teacher at the Bantu Normal College when Mandela judged a debating competition between it and the Jan Hofmeyr School of Social Work. He clearly remembers a “very debonair” Mandela but not who won the competition. “I think we won. We probably won,” said Tutu laughing.

Since Mandela’s imprisonment in 1962 and life sentence imposed in 1964, he and Tutu developed a relationship without ever having met again.

Now they were standing together in the City Hall on that momentous occasion “a quarter of a century ago” as Archbishop Emeritus Desmond Tutu puts it. But the reunion almost didn’t happen. After President FW de Klerk’s announcement on 10 February 1990 that Mandela would walk free in 24 hours, Tutu could not find a seat on a commercial aircraft. He was in Johannesburg baptizing his grandson, the child of his son, Trevor.

His personal assistant, John Allen, found him a seat on a plane chartered by the BBC and ‘the Arch’ made it to the City Hall. But Mandela had not. He was due to address a huge crowd gathered at the Grand Parade and they were becoming ‘restive’, Tutu recalled.

“I just sent word and said if he didn't come, Cape Town would be torn apart. I mean the people would be so angry that we would not recognize Cape Town afterwards.”

“Mercifully he came.” But it was so dark by then that Mandela had to read his prepared speech by torchlight.

Tutu was studying at Kings College, London, when Mandela and his seven comrades were sentenced to life in prison on 12 June 1964. He remembers the fear that they would be sentenced to death and the vigils and protests against it.

Standing in the Cape Town City Hall on 11 February 1990, he thought back to their first meeting and all that had come afterwards. “The before and now -- it didn't seem true,” he said. “You know you wanted to keep pinching yourself and saying, ’No, I mean we are dreaming, we are dreaming all of this’ but there he was as large as life, with his regal presence.“

“He was a presence you know?”

Struck by Mandela’s dignity, Tutu felt that his calm demeanor could have been a sign that he knew his release “was something that was due” rather than “really courtesy of the government”.

At the same time he was also deeply moved by Mandela’s magnanimity and the way in which he acknowledged De Klerk’s role. This trait, which Mandela continually demonstrated throughout the rest of his life, was “a genuine attribute,” Tutu said. It was him “being able to acknowledge the other and hear what the other was saying even if it was wrong. He gave the other the respect due to him as a fellow human being.”

No sooner had they reached the house then the phone calls came flooding in from presidents and politicians from around the world. The White House in Washington, State House in Lusaka and many others, all wanting to have Nelson Mandela put on the line.

A poignant moment for Tutu was when Mandela gathered in his lounge with a group of his comrades for their first meeting in decades. The Archbishop entered the room to say a prayer of thanksgiving and led them in Reverend Tiyo Soga’s famous hymn in isiXhosa, ‘Lizalis’idinga lakho’ – ‘Let your will be done’. Then he left them alone. 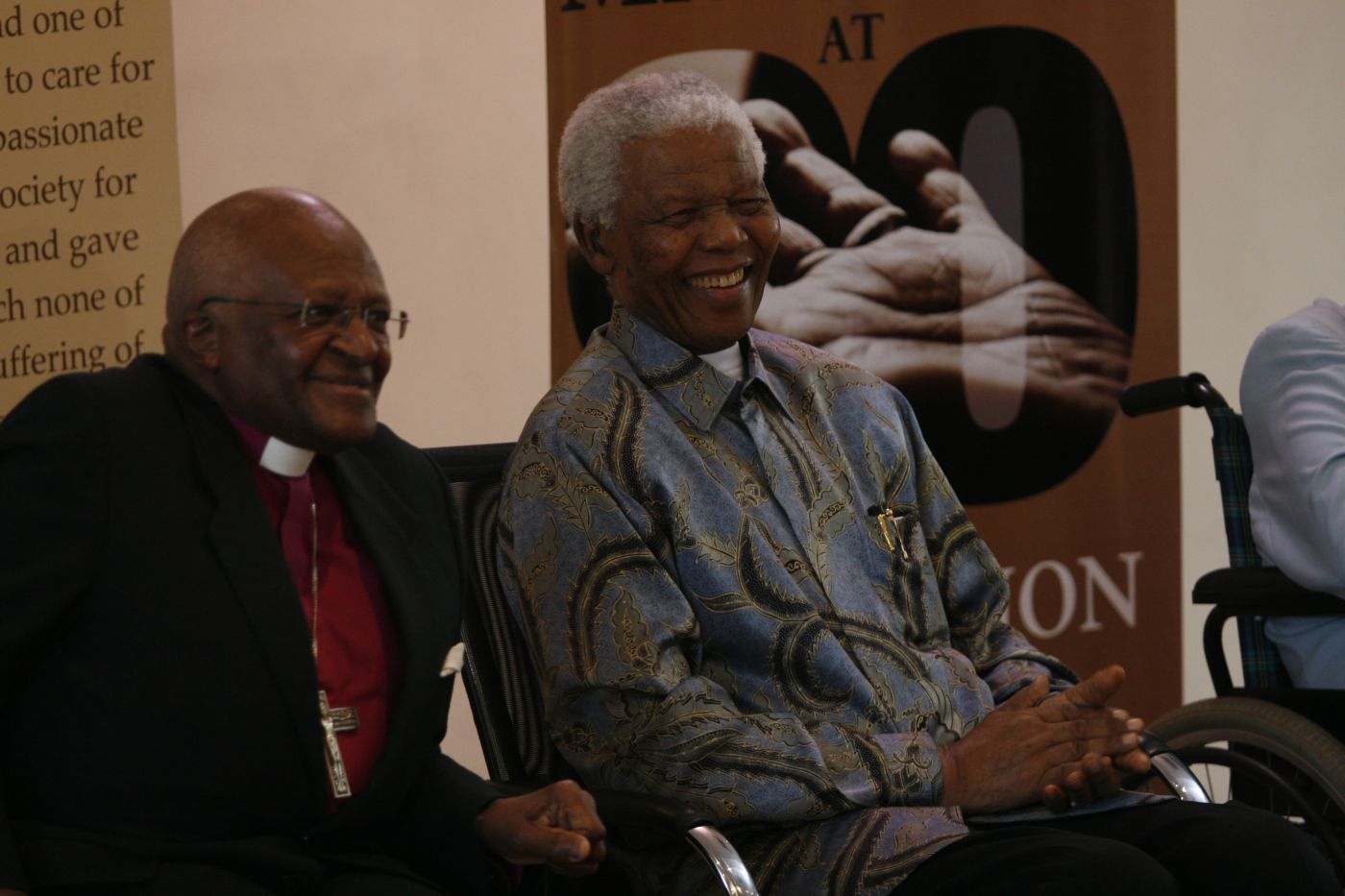 Before Mandela gave a press conference on the Bishopscourt lawns the next morning, the Tutu family’s physician, Dr Ingrid le Roux examined him. “When we asked later, she says she was trembling so much, she’s not sure how she actually managed to give him a check-up,” laughed Tutu.

And again a display of Mandela’s genuine regard for people. As he left the house for the airport Tutu noticed how he thanked every member of staff at the house. “It wasn’t a gimmick; it was that he really showed his appreciation to people.”

Soon after he became South Africa’s first democratically elected President, Mandela established the Truth and Reconciliation Commission (TRC) to deal with crimes against humanity committed during the apartheid era. He appointed Tutu its Chairperson.

He remembers how, after former President PW Botha had refused to appear before the TRC, Mandela said, ‘Tell him that if he thinks it is being done in order to humiliate him, I am prepared to accompany him and sit with him at his hearing, and ensure that he is treated with the respect due to him.” Botha did not appear before the TRC but Mandela travelled to his Southern Cape retirement home in an attempt to convince him.

“We are going to go very far before we find someone of his magnanimity,” said Tutu of Mandela. “It was not a cheap second-hand thing that was being paraded only for show.”

Tutu and Mandela became close after his release and even though they had only met fleetingly before, each had become impressed by the other’s accomplishments.

Unsurprisingly officials stopped most of Mandela’s attempts to communicate with Tutu and his family. In one letter, written in 1984 letter to Trevor Tutu, Mandela wrote:

“We love and respect your parents; they are never very far from the ramparts, and they carry a lamp which throws up a strong and bright flame which tends to shine far beyond the family circle.”

This was one of the letters held back and Tutu only saw it in February 2015, 31 years after it was written.