October 30, 2010 – The launch of Conversations with Myself took place today at the Market Theatre in Johannesburg. Guests were treated to a thought-provoking panel discussion between Ahmed Kathrada, John Kani, Zindzi Mandela and Luvuyo Mandela.

This is what some of the guests had to say after the launch:

“It was excellent. It reflects Madiba in many ways that I have learnt to know him. There is so much one can still add – I think there is another book to be written!” – Amina Cachalia

“I find it really moving that his book was written so sensitively. I was impressed by the honesty and normalness of his great-grandson.” – Ruth Spector, Opera Africa

“It was almost like we were sitting with him in the lounge, reminiscing about childhood. The value of collective leadership came to the fore out of this afternoon’s discussion. It was wonderful!” – Nandi Mandela

“It was just magnificent to hear John Kani’s interpretation and the emotions that came through.” – Geoff and Silia Verschoor

“I think that making Conversations with Myself accessible to the world is such a great idea, and will enable people to learn more about Mr Mandela from his own writing, not other people’s interpretations.” – Sebiletso Mokone-Matabane

“This book is a continuation of the conversation Mr Mandela always has with his family and his people. It’s important and paints a picture of the man as a father and makes us appreciate him as a person and not just as a political icon.” – Max Sisulu

“I spent a year studying Mr Mandela when I was working on the picture illustrations of the children’s version of Long Walk to Freedom and although I was inspired by the book, I wasn’t sure that he had written it himself. But now after reading Conversations with Myself, I am now convinced that it’s his authentic voice.” – Paddy Boma

“We sang for Mr Mandela when he accepted his Nobel Peace Prize, but I never knew much about him. If you read the correspondence to his family, you understand that he was a real family man. He was always humble despite the hurt his jailers caused him by preventing him from attending his mother and son’s funerals.” – Romeo Qetsimani

“This book is such an outstanding way to honour Mr Mandela because since his retirement, we hardly see or hear from him. We appreciate that as much as he is not visible physically, intellectually, he still commands respect and we must all celebrate that aspect of his life.” – Vuyani Ntanjana

“This book is about debates Mr Mandela had with himself, which led him to make the right decisions. We learn about his mistakes, regrets, fears and weaknesses but we see him the leader – always weighing up that which would be good for others. It teaches us that what we think today will not necessarily [give us] the answers for tomorrow.” – Jessica Mpangeni

“The book teaches us that Mr Mandela is human. We are fortunate to read about the man’s life from his own writing while he is still with us.” – Zakhele Dumas

Listen here to some audio extracts from Conversations with Myself.

South African actor John Kani reading from Conversations with Myself 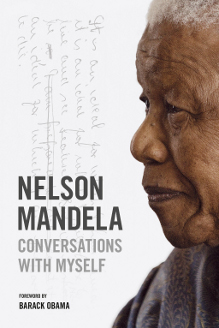 The South African edition of Conversations with Myself

Guests at the South African launch of Conversations with Myself

Nelson Mandela’s daughter, Zindzi Mandela, and friend, Ahmed Kathrada, at the South African launch of Conversations with Myself at the Market Theatre in Johannesburg