23 July, 2011 – Professor Ismail Serageldin, director of the Library of Alexandria in Egypt, was this year’s speaker at the prestigious Nelson Mandela Annual Lecture, which took place on Saturday, 23 July, 2011 at the Linder Auditorium in Johannesburg.

The theme of the lecture was “The Making of Social Justice: Pluralism, Cohesion and Social Participation”.

The occasion opened with a piano-accompanied rendition of South Africa’s national anthem, led by three tenors from the University of Pretoria, after which Achmat Dangor, Chief Executive of the Nelson Mandela Foundation, welcomed the audience and introduced Professor Jakes Gerwel, chairperson of the Foundation.

Prof Gerwel began by wishing Nelson Mandela a happy birthday and reflecting on Mandela Day, saying he was sure we had all been busy on that day “giving 67 minutes of our time for a better life for all”. He went on to affirm the commitment of the Nelson Mandela Foundation’s Centre of Memory to promoting Mr Mandela’s humanitarian legacy. Prof Gerwel then introduced a video of Mr Mandela speaking about the Centre of Memory.

In the video Mr Mandela talked about the importance of memory, saying that it played a vital role in reconciliation. He said that promoting and sustaining the work of archive institutions was of great importance. “The history of our country is characterised by too much forgetting;” said Mr Mandela, “a forgetting that served the powerful and dispossessed the weak.”

The video also reflected Mr Mandela’s call for others to continue the work he had begun. “The time has come to fully hand over my work,” he said, describing his longing for people to live in harmony and with equal opportunity.

After the video, Prof Gerwel described the Annual Lecture as being “an integral part” of promoting Mr Mandela’s legacy, and once again emphasised the importance of bringing people together through dialogue, “and, in Nelson Mandela’s words, especially those who disagree”, he said.

Describing the speaker as “a distinguished colleague and activist”, Jakes Gerwel, chairperson of the Nelson Mandela Foundation, introduced Professor Ismail Serageldin, director of the Library of Alexandria in Egypt, as the esteemed speaker for the 2011 Nelson Mandela Annual Lecture.

Professor Serageldin began his address, titled “The Making of Social Justice: Pluralism, Cohesion and Social Participation”, with a poignant birthday message for Nelson Mandela and a brief outline of his lecture.

“Today I would like to address five points,” he said. “Social justice as the foundation of the state; the meaning of justice; freedom, rights and equity; cohesion in the age of pluralism and the centrality of participation.”

What is social justice?

In debating the concept of social justice, Prof Serageldin described it as “the foundation of the modern Republic of South Africa”, saying that the light from South Africa – meaning the freedom, human rights and democracy so celebrated in our country – had finally reached the northern part of the continent.

“As you all know, this has been the ‘Arab Spring’. Ordinary citizens have toppled autocrats and still battle dictators armed with little more than their convictions,” he said, adding that “ultimately, they cannot be denied”.

Prof Serageldin then asked what defined justice, and quoted the philosopher John Rawls, who simply expressed justice as fairness. “But justice includes freedom, equality, inclusion and social interaction,” he added.

To illustrate the limitations society places on justice, and the margins on which society relies for fairness, Serageldin told a parable he heard from his friend, Indian economist and philosopher, Amartya Sen.

The parable speaks about three children and a flute – and which child would be more deserving of the musical instrument, considering their respective social situations.

“You meet three children with a flute and they ask you to help them decide who should get the flute. The first child is poor and has no toys, while the other two are rich and have many toys. The facts are not contested by any of the children. Thus it is ‘fair’ to let the poor child have the flute.

“Now consider the same three children, but the middle child says that she is a talented musician, she enjoys playing the flute. She plays it well. The other two have absolutely no musical abilities at all, and they enjoy listening to her play and again, the facts are not contested. She should get the flute.

“The third child contends that even if the first is poor and the second is talented, he is the one who made the flute. He took the reed and made the holes in it and turned it into a flute. Surely it is only fair that he should get the result of his own work.”

The parable, in Prof Serageldin’s words, reflects the criteria of social choice – equity, utility and entitlement, and the value we assign to each of them at different times in society.

Are the choices we make for the better of social justice?

Quoting Nelson Mandela on freedom: “To be free is not merely to cast off one’s chains, but to live in a way that respects and enhances the freedom of others,” Prof Serageldin introduced the notion of choice and social justice.

He then spoke on the most fundamental of all human rights – freedom – which he described as the ability to decide or to choose. He said such freedom was restricted by poverty, lack of education and illness, notwithstanding the limitations imposed by ethnicity or gender. He suggested that to many, society’s assistance to each individual to ensure that they acquired such capabilities became in itself a human right, and without that, there could be no social justice.

Prof Serageldin continued his lecture by delving into the notion of rights and fairness. Rights, he said, should be defined as having limits to ensure social justice and social cohesion.

On fairness he said, “Some people would see fairness as the provision of equal opportunities only. If the result is to have some who are as rich as Bill Gates and some who are extremely poor, so be it. Others, most of us in fact, would see that a society where some people are lighting cigars with thousand dollar bills while others are starving is inherently unjust, whatever the starting position was and whatever the procedural guarantees have been.”

Justice then, Prof Serageldin suggested, should not merely be the provision of something legal, but also something equitable. As such, justice must be tempered by mercy. But beyond justice and equity lay the qualities needed for social cohesion to bring the disparate elements of society together.

How, then, do we achieve social cohesion?

Today, as all territories start turning into rainbow nations and pluralism is becoming the norm, how can we achieve social cohesion?

Speaking about his home city, Prof Serageldin described the former cosmopolitanism that characterised Alexandria in the 19th and 20th centuries, where communities from nations around the world co-existed, and all were considered Egyptians.

“We would lunch together at the Syrian club and dine together in the Greek club. They had a multiplicity of newspapers and produced novels, plays and films in multiple languages. The mosaic of diverse cultures was overlain by other social networks that criss-crossed many political movements and parties. Today, that is elusive without slipping into exclusion and hostility,” he said.

What is helping bridge the divide? Serageldin said youth and technology had come to the rescue of social exclusion and diversity. Internet culture, he explained, had dissolved boundaries of politics and geography to help create networks of people who shared common interests that would have been unthinkable not very long ago.

He said social networks had revolutionised the way societies interacted – and new media were changing the face of social interaction.

While threats of ingrained prejudice and polarisation remained, Prof Serageldin said the internet had removed the barriers to expressing such opinions.

“Let’s hear it for the youth”

“I have unlimited confidence in youth. They will craft the world in their own image, idealistic, dynamic and imaginative way, and it will be a different world than that which we have known,” said Prof Serageldin. “We are on the cusp of a major global revolution.”

After speaking on equality, cohesion and social justice, Prof Serageldin spoke about one key that discerns the application of all the concepts above: wisdom, as distinct from knowledge and information. He then provided another key that he said promoted trust and made social transactions between people possible: participation.

Those who participate hold themselves accountable. “We who believe in democracy and in liberty, are going to win…  No one can stop the tides of change and progress,” he said.

In closing, Prof Serageldin spoke about the tides of history that had shaped the societal forces of democracy and human rights. As the tides of change had shaped our realities, so too would real democratic participation provide the youth with respect and belief that ideals of truth and liberty and justice were not empty words, he said.

With a special message for the youth, Prof Serageldin said: “You have been called the children of the internet, or the Facebook generation, but you are more. You are the vanguard of the great global revolution of the 21st Century. So, go forth into the journey of your lives, to create a better world for yourselves and for others. Think of the unborn, remember the forgotten, give hope to the forlorn, include the excluded, reach out to the unreached, and by your actions from this day onwards lay the foundation for better tomorrows. Get on with the task of creating social justice, based on pluralism, cohesion and social participation.”

The 9th Nelson Mandela Annual Lecture was made possible through the support of SAP as primary donor with supporting contributions of the Swedish Postcode Lottery and the Coca-Cola Foundation.

Read a transcript of the 9th Nelson Mandela Annual Lecture. 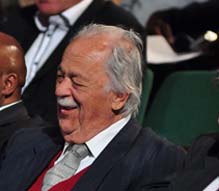 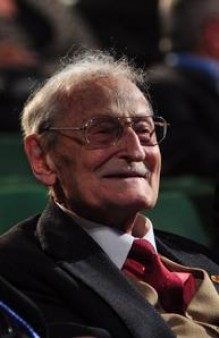