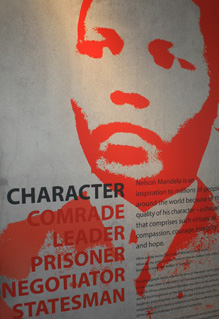 One of the many displays in the Mandela exhibition

The exhibition, which was developed in partnership between the Nelson Mandela Foundation, the Apartheid Museum and the Nelson Mandela Museum in Mthatha, is made up of photographs, videos and artifacts, which include the car that Mercedes Benz workers made for Mandela while he was president of South Africa.

The Mandela exhibition at the Apartheid Museum was launched today

After the speeches, a video message to Nelson Mandela from United States President-Elect Barack Obama on the occasion of Madiba’s 90th birthday this year was played. Obama said, “I reflected on your courage and your foresight and conviction, and on your fundamental belief that we do not have to accept the world as it is, that we can remake the world as it should be.” View the video here.

Tutu began his entertaining and at times outspoken address with a story to much laughter from the audience about how, when he and his wife Leah went to attend the renaming of a 400-year-old school in the Netherlands in his honour, a small girl stopped him and asked him, “Were you there when the school started?”

He also told several anecdotes about his schooldays, such as how as a child, he and his classmates were outraged by a history textbook that referred to how “the Xhosas stole the cattle”, but “the settlers captured the cattle” and the myth that David Livingstone had “discovered” the Victoria Falls.

“One of the most important things that this exhibition embodies is saying that we are reclaiming history,” argued Tutu.

He also filled his speech with personal reflections on Madiba. “It is important for us to remember,” Tutu said, “that this one who we hold in such high regard is a human being; he was a little boy who herded cattle. What does this say to our children? It says to our children that they don’t come ready-made for heaven …” He reiterated how Mandela, like he himself, had just been an ordinary child.

“We need to say to our children,” Tutu continued, “you have obstacles – turn them into challenges, don’t turn them into barriers. We come from a time when there were public signs: ‘Natives and dogs not allowed!’” 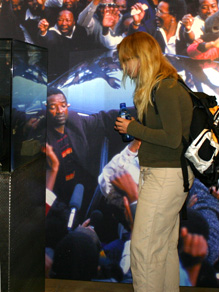 A visitor to the Mandela exhibition

Tutu also warned about the importance of South Africans protecting their hard-won freedom, and the need for debate to happen in an open manner. “We must remember we are free today – we are free! We are free! But remember the cost of that freedom. Our freedom is not cheap. Please, please, please, please, treat it has something fragile. … Debate, debate, debate as vigorously as you can – but know the other person has the right to respond … My father used to say to me: ‘Don’t raise your voice; improve your argument.’”

Tutu also again spoke out in support of the Springbok emblem that has long been the subject of contention in South Africa, particularly in the past few weeks. “I support the retention of the springbok and I pray we will look for better things to fight over.”

Before Tutu spoke, John Kani made a short speech in which he told audiences “We began this institution [the Apartheid Museum] lest we forget … It is for me the crowning glory moment that today we have the Mandela Exhibition.”

Jakes Gerwel, who has worked closely with Madiba for the past 14 years, first as director-general in the president’s office when Mandela was president, and more recently as chairperson of his Foundation, told the audience, “Our Madiba … brings a smile to our hearts … a sense of calm and reassurance in a troubled world.” 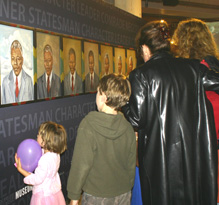 Visitors engage with the Mandela exhibition

He said he was sure the scale and ambition of the exhibition would impress audiences, and argued, “Madiba’s legacy belongs to us all – and we respect it most effectively when we share it actively. ”

Gerwel said Mandela had an “exceptional view of humanity. He has an unshakeable faith in the fundamental goodness of people … and he generally believes the world is populated by people like him!”

Kader Asmal spoke of Mandela’s “insatiable desire for peace” as well as his great sense of humour, his humanity, and the fact that his legacy “belongs not only to South Africa, to Africa – he’s part of humanity.”

Asmal quoted Irish poet Seamus Heaney, saying Mandela “made hope and history rhyme for us”.  Said Asmal: “He made this country fit not for heroes, but for ordinary people.”

Education Minister Naledi Pandor also focused on Nelson Mandela, the person, in her speech, which she started by saying, “You cannot neglect the man to the detriment of the lesson.”

She recalled the murder of anti-apartheid leader Chris Hani’s in 1993, and the tension that gripped the country in its wake. “We were perched on the brink of an abyss,” remembered Pandor. “Mr Mandela sensed the mood at the funeral and of the country, and encouraged all to be soldiers of peace.”

Noted Pandor of Madiba, “He has led without bitterness, is willing to forgive … he is a leader. This exhibition shows that leadership matters; it makes a difference.”

She finished off by quoting Nigerian poet Wole Soyinka:

Your bounty threatens me, Mandela, that taut
Drumskin of your heart on which our millions
Dance. I fear we latch, fat leeches
On your views. Our daily imprecations
Dull keen edges of your will
Compromises deplete your act’s repletion-
Feeding will-voided stomachs of a continent,
What will be left of you, Mandela?

Pandor answered the final line of Soyinka’s poem with the words, “This exhibition – and many other tributes.” 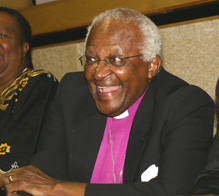 Education Minister Naledi Pandor: “You can neglect the man to the detriment of the lesson” 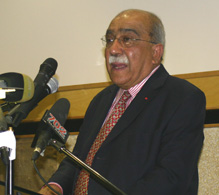 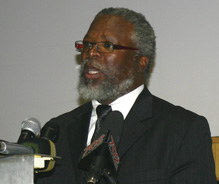 Apartheid Museum Chairperson John Kani: “It is for me the crowning glory moment that today we have the Mandela exhibition” 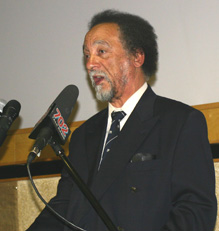 Nelson Mandela Foundation Chairperson Jakes Gerwel: “Madiba’s legacy belong to us all – and we respect it most effectively when we share it actively” 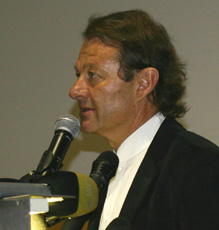 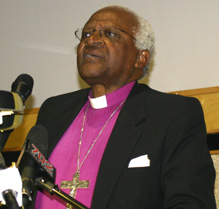