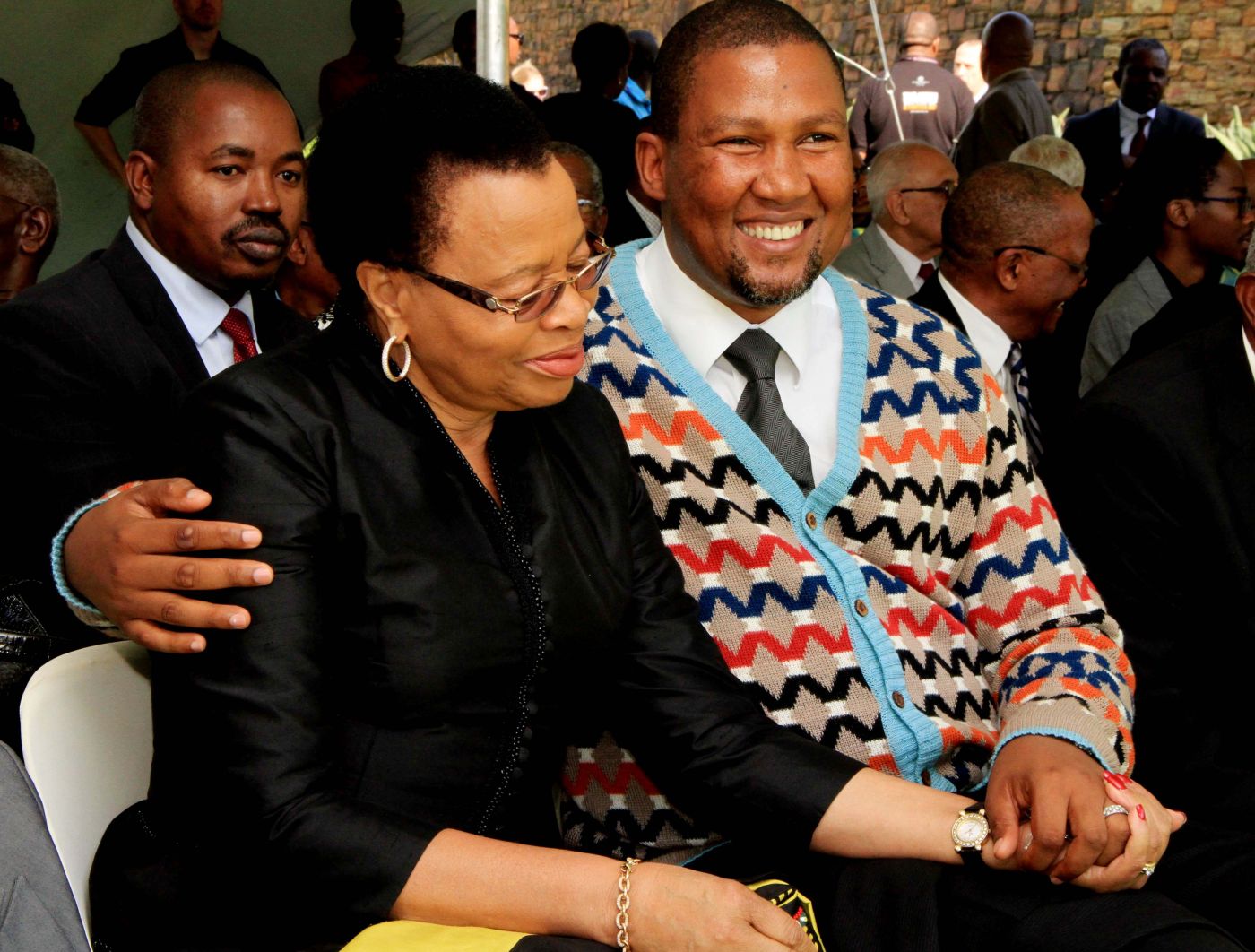 Graca Machel is comforted by Chief Zwelivelile Mandela after her arrival at a wreath-laying ceremony, which was part of the Nelson Mandela Day of Remembrance activities arranged by the South African government, led by the Presidency and supported by the Department of Social Development, and the Nelson Mandela Foundation, at the Union Buildings on Friday morning, December 5. Photograph by Yolanda van der Stoep

5 December 2014, the Nelson Mandela Day of Remembrance, marked the first anniversary of Madiba’s passing one year ago.

Activities arranged by the South African government, led by the Presidency and supported by the Department of Social Development, and the Nelson Mandela Foundation, kicked off at the Union Buildings on Friday morning, December 5 and included an event at Freedom Park in Pretoria and the Nelson Mandela Legacy Cup cricket match between the Proteas and the Springboks at the Wanderers.

Deputy President Cyril Ramaphosa reflected on memories of Madiba as he opened the day's commemorative activties.

His address is published below:

Members of the Mandela family,

Members of the Diplomatic Corps,

Veterans of our struggle,

Members of the media,

Today marks the first anniversary of the passing of the father of the democratic South Africa, Nelson Rolihlahla Mandela.

Last year on this day, the 5th of December, President Jacob Zuma informed a shocked and traumatised nation that we had lost our founding father. It was a moment of profound loss, not only for the people of South Africa, but for many across the world. Our country was plunged into a period of mourning and sadness. Yet despite that sadness and a feeling of loss we were able to gather our strength to celebrate Madiba's life. 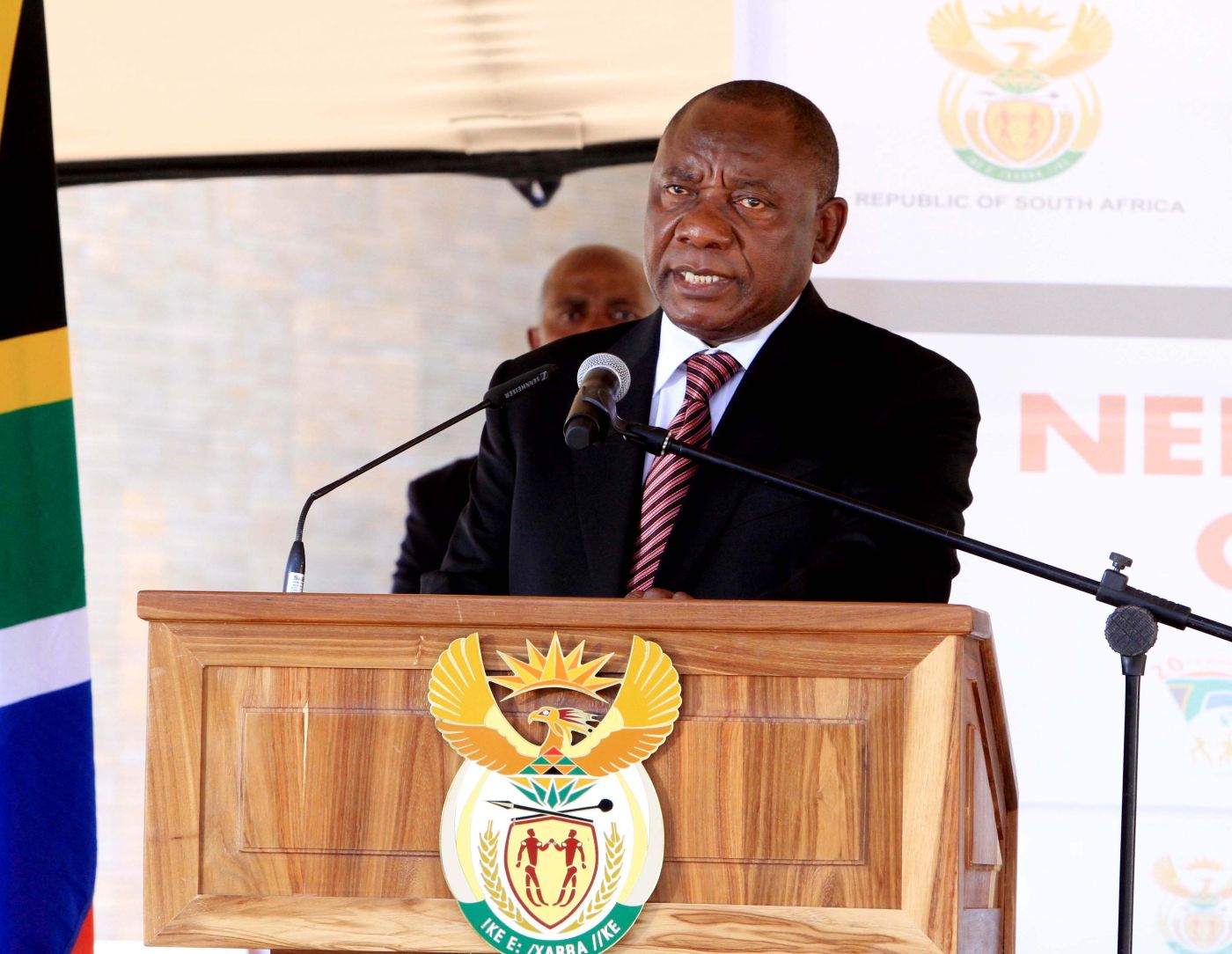 Acting President of the Republic of South Africa, Cyril Ramaphosa delivers his keynote address at the Nelson Mandela Day of Remembrance event, arranged by the South African government, led by the Presidency and supported by the Department of Social Development, and the Nelson Mandela Foundation, at Freedom Park in Pretoria on Friday morning, December 5. Photograph by Yolanda van der Stoep

As we commemorate the first anniversary of Nelson Mandela's passing we have an opportunity to reflect on our collective memories of the father of our nation and the founding father of our democracy. This moment calls upon us all to pause and reflect on the life of South Africa's greatest son. As we reflect we need to spare a moment to think about the profound impact that Madiba has had on all of us as individual South Africans, on us as a nation and indeed on people around the globe. We are commemorating the passing of a life President Barack Obama said no longer belongs to us but belongs to the world and to the ages.

As the people of South Africa we would like once again to thank many people across the globe who mourned Madiba with us and sent messages of condolence; many who organised and attended memorial services, and multitudes who embraced Madiba as though he were their very own. We also wish to express our sincere gratitude to the heads of state and government and leaders from various fields who travelled to South Africa to pay their final respects to this extraordinary human being.

Today we recall how the people of South Africa came together as one to mourn the passing of a person who, more than anyone else, represented our shared desire for a better future. In life, Madiba led us on the road to reconciliation. In death he has shown us the way to unity and nationhood.

We all mourned Madiba's passing with dignity, respect and love. We celebrated his life, his work, his achievements and what he stood for and represented as we do today and as we shall in the future.

We commemorate the passing of Nelson Mandela not to satisfy any requirement of protocol or convention.

And with the weight of that burden on his shoulders, he worked to free us all and in a way made black and white embark on the journey to reconcile with each other; to forgive past transgressions and hatred; accept democracy, embrace human rights, non-racialism, non-sexism and begin the task of the long and arduous odyssey to become a nation of diverse cultures, religions and races. A nation that speaks in many tongues but that should finally have one voice that melds into a chorus of unity. A nation that is united under one flag, with a unifying coat of arms and singing one national anthem.

It enjoins us to continue to strive for peace, freedom and justice.

It motivates us to fight discrimination, oppression and exploitation wherever they may manifest.

It helps illuminate our way as we navigate the path we must necessarily travel towards a united non-racial, non-sexist, democratic and prosperous society.

Nelson Mandela taught us that the human spirit is indeed capable of triumph over adversity.

He taught us humility.

He taught us honesty. He taught us that leaders must see themselves as, and behave like, servants of the people.

He followed the advice of his fellow African revolutionary, Amilcar Cabral, who wrote:

"Hide nothing from the masses of our people. Tell no lies? Mask no difficulties, mistakes, failures. Claim no easy victories”

He taught us that people come first. Not just some people. All people.

In this, he set an example for all leaders and public servants.

He taught us discipline.

He taught us that it is not sufficient merely to hold true to high ideals.

For progress to be made, it is necessary to turn those ideals into reality.

It is necessary to theorise, to strategise, to persuade, to unite, to mobilise and to struggle tirelessly and relentlessly.

Nelson Mandela taught us that great victories are not willed.

They are products of hard work.

As we reflect on the challenges of the present - on poverty, unemployment and inequality - we are reminded that it is only through united action that we will succeed.

It is only through building inclusive social partnerships that we will prevail.

Through such partnerships we were able to dismantle apartheid.

And through such partnerships we will overcome its legacy.

It was the bonds of friendship and solidarity built across the continent and across the world that established a global movement to isolate racist South Africa.

It was the mobilisation of a broad front of our people in all their formations, united around the leadership of our movement that assured our victory over the forces of oppression and exploitation.

We remain united to this day in our determination that never, never and never again shall it be that this beautiful land will again experience the oppression of one by another.

Madiba taught us that: "What counts in life is not the mere fact that we have lived. It is what difference we have made to the lives of others that will determine the significance of the life we lead.”

We remain united in our determination to make that difference and eradicate poverty.

We remain united in our determination to overcome inequality.

We remain united in our determination to defeat the AIDS and TB epidemics. Madiba showed us how to love and have compassion for those living with HIV and AIDS. On 1 December, World Aids Day we remembered his lesson as we called on South Africans to eliminate stigma and discrimination against those living with HIV.

We remain united in our determination to end violence against women and children. During the 2014 16 Days of Activism for No Violence Against Women and Children we call upon men to emulate Nelson Mandela who respected women and loved children.

We remain united in our determination to build a non-racial, non-sexist and democratic South Africa.

And yet, we find ourselves still divided.

The barriers of race, class and gender are still prominent in our society.

Our communities are still plagued by insecurity, mistrust and discord.

Our workplaces are increasingly fractious.

Our body politic is increasingly polarised.

Faced with such challenges, there are many who would despair.

There are many who would abandon entirely the effort to build a new nation, and retreat to an insular and sheltered existence.

But not us. Not the people of South Africa.

For we are the children of Mandela. We are the sons and daughters of Luthuli, Sisulu, Tambo, Ngoyi, Dadoo, Mabhida, Charlotte Maxeke, Hani and Slovo.

We have learnt valuable nation building lessons at their feet. We are following in their footsteps.

We must confront that which divides us.

We must pursue that which unites us.

We are building an economy that will benefit all as we expand both physical and social infrastructure.

We will continue to make all efforts to equip our people with the knowledge, skills and capabilities to succeed and to thrive.

We are making dramatic efforts to overcome disease. Our life expectancy is improving. We are determined to eradicate hunger.

We are building democratic institutions that truly reflect the will of the people and which resolutely pursue their interests.

We must treat corruption for what it is - an assault on the poor and an affront to our liberty.

We must build the kind of society to which Nelson Mandela dedicated his life.

He was our teacher and our mentor. He never gave up on the struggle to free us all and unite us into one nation. He was forgiving conciliatory and tolerant. He was acutely aware of our fault lines as a people. He was aware of our weaknesses and failures but acknowledged that despite the rage, the resentments and noise that sometimes engulfs us he understood that we are all frail and vulnerable and could only succeed if we reach out to each other and join our hands in striving for the ideals he inspired us to reach for.

He taught us to build the nation based on respect for each other, no matter what our differences; tolerance of others, no matter how our prejudices may be; compassion for the weak and poor; above all perseverance in the face of adversity; fortitude in the face of fear; forgiveness in the face of humiliation, and humility in the knowledge that we are all equal - that to be one with one another we have to be at peace with ourselves.

As we gather here, a year later, to remember our beloved father, we are bound to recall that only through a collective effort of progressive humanity can we ensure global peace and security.

Only through a collective effort of progressive humanity can we mobilise the world's bountiful resources to ensure no one goes to bed hungry, that no one grows up illiterate, that no one succumbs to diseases that can be prevented, and that no one is oppressed or exploited by another.

Nelson Mandela has shown us the way to freedom.

We are here today to once again tell Madiba that his long walk is over; he can continue to rest.

His long walk is over, but ours is ongoing. He has passed the baton to us and every day we need to prove ourselves equal to the task of liberating ourselves and others from hunger, poverty, from hopelessness, from inequality and from unemployment.

He has led us to the top of a great hill. We have rested for a moment to view the glorious vista that surrounds us.

But there are many more hills to climb.

And we dare not linger, for our long walk is not yet ended. With Madiba's spirit as our lodestar we dare not fail.

We thank the Mandela family for giving Madiba to the people of South Africa and the world.

Thank you Tata. Ulale ngoxolo Madiba. We will always remember you.