During Nelson Mandela’s post-presidential years, he spent part of his life establishing institutions and organisations that would help in the fight against poverty, against injustice and help secure a more just and equitable society. The other parts were spent pulling the ears of world leaders, celebrated personalities, and leaders of business to support the work of transformation and nation-building.

Yesterday, the Nelson Mandela Foundation hosted the official South African launch of ‘MANDELA, My Life: The Official Exhibition’ in Nelson Mandela Square, Sandton City, in partnership with Richmark Holdings and TEG Live. The launch was attended by members of the Mandela family, Ndileka Mandela and Makaziwe Mandela-Amuah, Struggle Stalwarts such as Trevor Manuel, trustees of the Nelson Mandela Foundation, media veterans Dan Moyane and Derek Watts, celebrated personalities such as John Smit, Letshego Zulu and Thebe Ikalafeng, as well as captains of industry. The evening was serenaded by Zolani Mahola and the internationally acclaimed Soweto Gospel Choir singing  ‘Asimbonanga’, originally composed by Johnny Clegg.

Although the night was attended by high profile and influential members of society, it was no reason to avoid heated and uncomfortable political discussion. 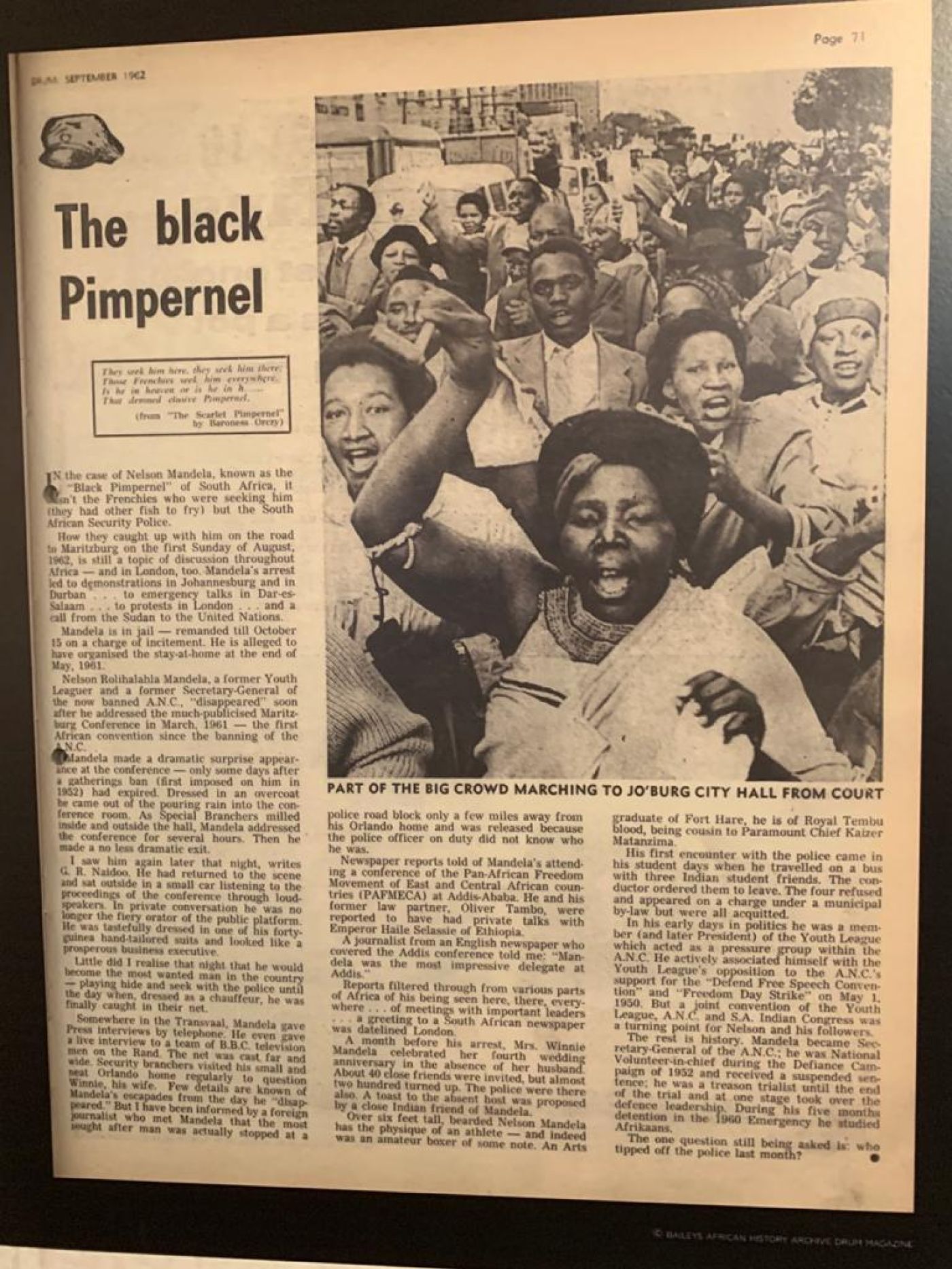 “These past few weeks, it was shameful to hear respected elders such as FW De Klerk share statements that denied that Apartheid was a crime against humanity. Such comments fuel the rise of the far-right and threaten the unity of this nation.” reflected Hatang. He went on to note that exhibitions such as “MANDELA, My Life” are important specifically in preserving the national memory of history and give us urgency in creating an equitable, just and fair society.“Ntate Joseph Shabalala, there ain’t no sunshine now that you’re gone. I hope you say hi to Ntate Johnny Clegg. Please sing ‘Hello My Baby’ to Mme Miriam Makeba. Please pass our greetings to Ntate Ahmed Kathrada” coonveyed Sello Hatang, reminding us of others who have passed on, whose memory guides the work of the Foundation. 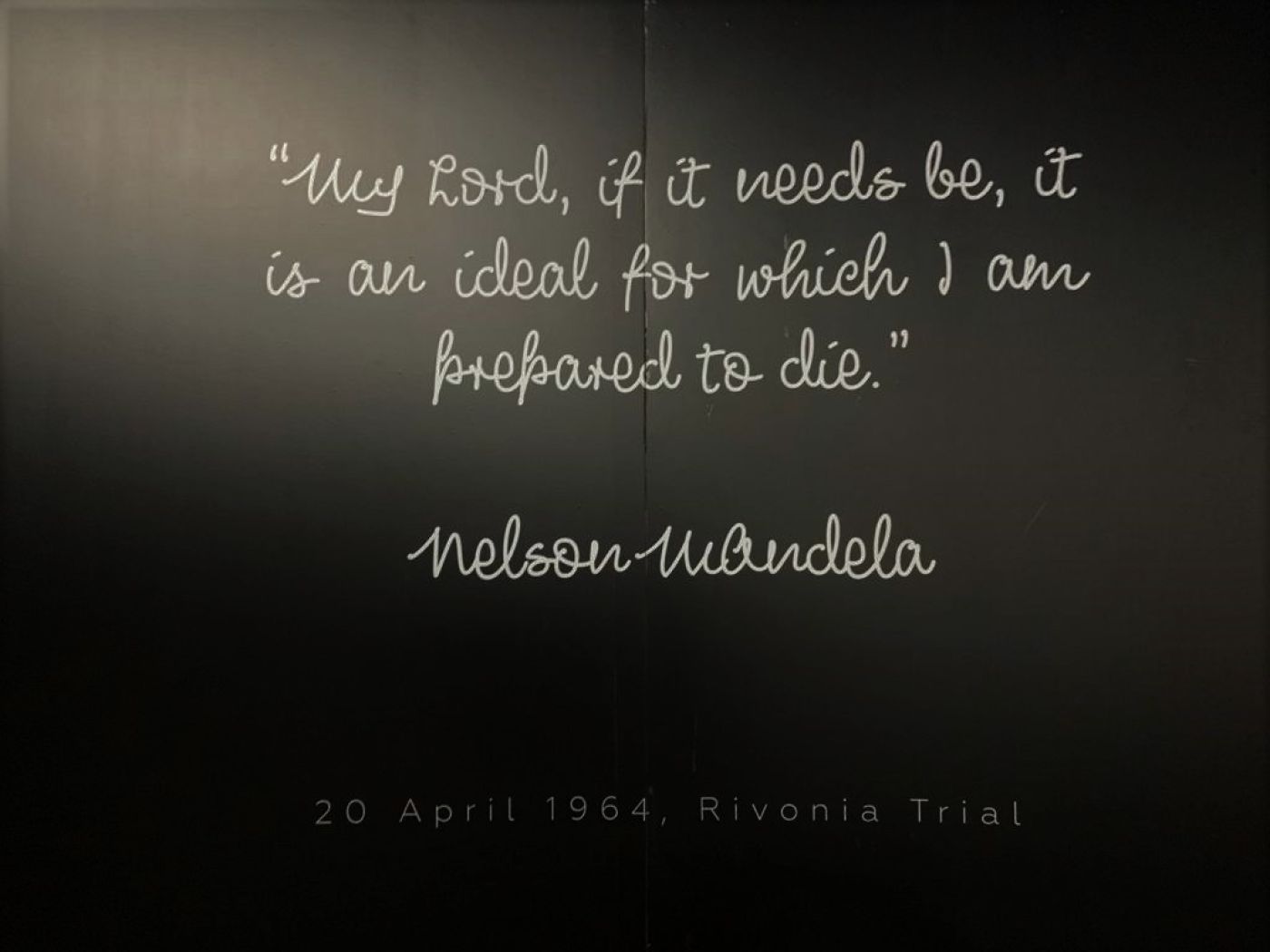 End of Madiba's Speech from the Dock

The Executive Chairman of Richmark Holdings, Gavin Varejes, supported the notions given by Hatang and reflected on how Richmark Holdings is proud to host the exhibition and hope it will inspire others to live by Mandela’s values. “Nelson Mandela is forever, he is our North Star”on our journey to freedom, shared Varajes.

Ndileka Mandela opened up on her experiences being a child of Nelson Mandela and having to share him with the world.“ The story of my grandfather is told in many ways but this exhibition gives us a broader glimpse into his life story which was a life of sacrifice and leadership.”

The official exhibition, in Sandton City until July, begins with a series of large paintings by John Meyer, one of hills, presumably in the Eastern Cape, where three young boys are seen running through rays of sunshine and blades of tall grass. The entrance engulfs the viewer, enabling them to fully immerse themselves in what is about to be an excellently curated narrative of Nelson Mandela. The first gallery invites viewers to feel the power and emotion of one of the most dramatic and significant moments of Mandela’s life - the moment he puts Apartheid on trial, supported by the original recording of Nelson Mandela’s Rivonia Trial speech in 1964 and illustrative depictions of the courtroom as Mandela deliver his speech. 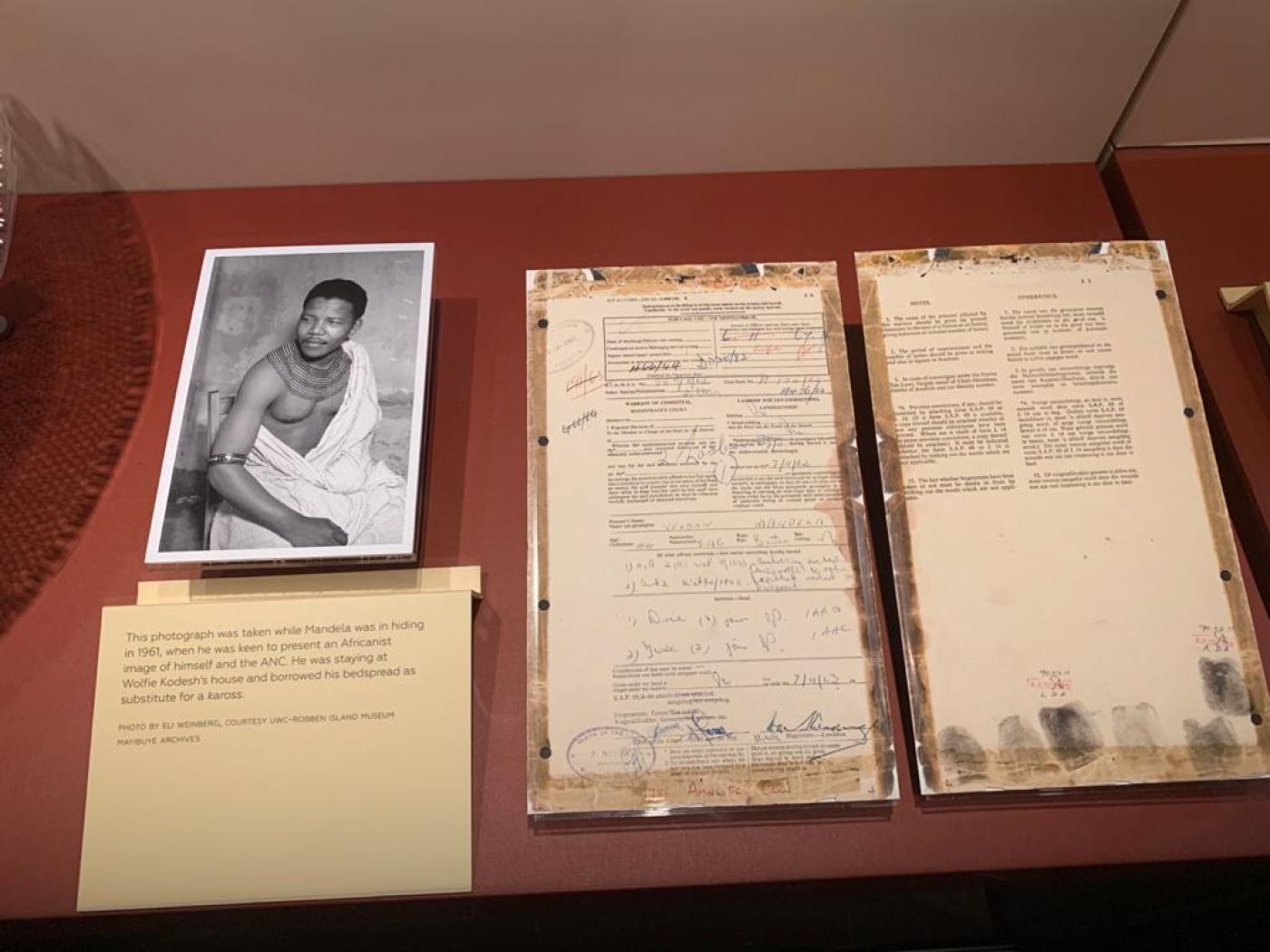 The second gallery explores Mandela’s family life and narrates his journey from childhood to elder through a spectacular seven-metre-long scenic projection wall of animations and landscapes. Elements of Mandela’s childhood are brought to life in an audio-visual piece that uses Mandela’s own words and images of his childhood homes in the Transkei.

The third gallery explores the influences that shaped Mandela’s theory of mind, presented through original artefacts, documents and film extracts that allow visitors to delve into the early life of Mandela as he established himself in Johannesburg. Personal items include photographs of Mandela with his first wife, Evelyn, and their children as well as his second wife, Winnie. This gallery also examines the means and methods by which Mandela navigated Apartheid and explores how this experience motivated his early political activism.

The ten galleries in total, whose journey lasts one-and-a-half to two hours, are concluded by a painting by John Meyer depicting Mandela the elder, walking back through the same rays of light and blades of tall grass with a cane. As visitors exit the experience, they are welcome to support the work of the Nelson Mandela Foundation by purchasing official merchandise, including the exhibition catalogue, memoirs, garments and home accessories. By purchasing this merchandise you are allowing the Nelson Mandela Foundation to continue doing the unfinished work of Nelson Mandela. 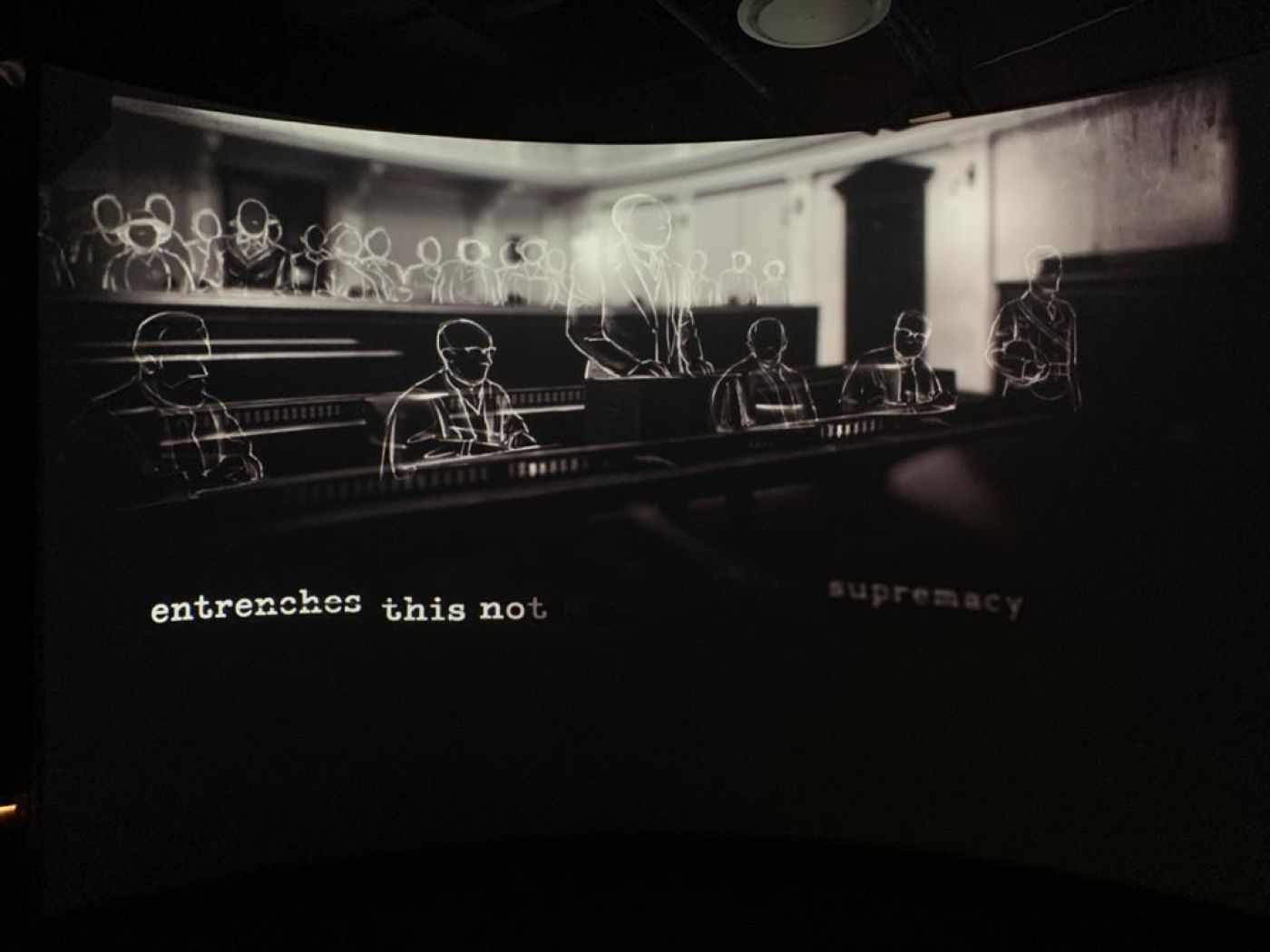 Animation of the Rivonia Trial

This past quarter, with the support of our partners, the Nelson Mandela Foundation is pleased to have built safe sanitation facilities in a school in the North West province, preventing the use of fatally dangerous pit latrines, collected donations for families in Mamelodi, including the Mamelodi 10’, to ensure they were fed over the festive season and that the children are well prepared for the coming academic calendar, trained over 400 Early Childhood Development practitioners in Gauteng on nutritious cooking and how to care for children with special needs, helped build over 2 000 homes for the disadvantaged, helped build a pan-African network of students focused on facilitating the transition from carbon to renewable energy in Africa as well as helped build a trans-Atlantic network of activists, academics and policymakers focused on tackling anti-Black racism.

‘MANDELA, My Life: The Official Exhibition’ will be on show to the public at Nelson Mandela Square, Sandton City, until the 20th of July after which it will move to Cape Town. The public is welcomed to book a ticket to view the exhibition at MandelaMyLife.com. 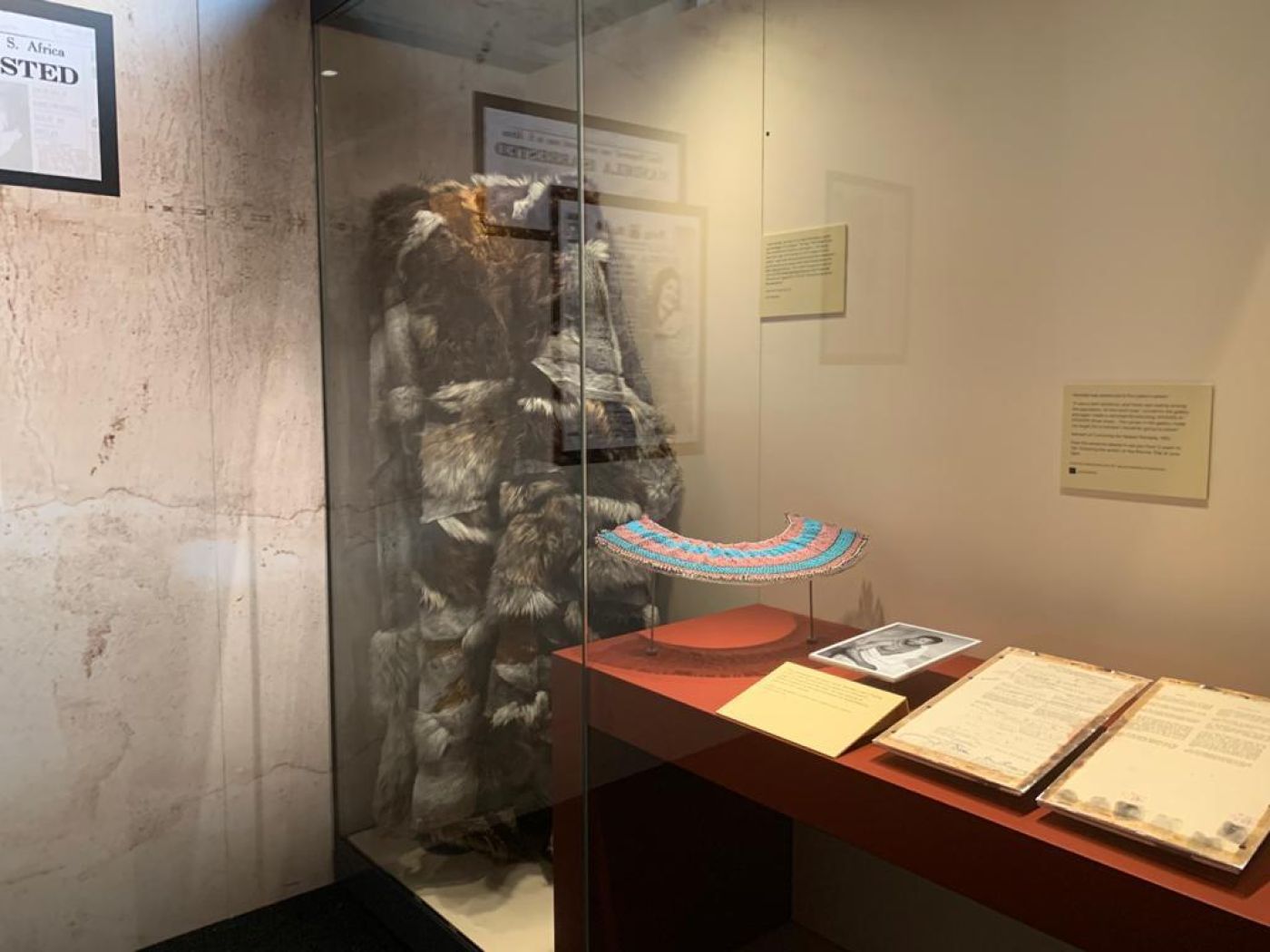 “Madiba’s legacy is a fundamentally important legacy. Not as the president, not as the leader of the ANC, not as a political prisoner, [but] as an all-encompassing human being who understood that history is shaped by people… and so part of what you have here are records that do not peer anywhere. When you look inside the exhibition and see that on those desk calendars, Madiba recorded his doctor’s appointments, recorded on there what the statistics were that the doctors gave him, where there were prescriptions what the medicines were. Madiba has planned every step along the way.” - Trevor Manuel, struggle stalwart.

“You think you’ve got an understanding of the journey of Nelson Mandela but coming through here your realise there’s so much more to the story that spans over decades and so this for me was a re-education of probably the richest part of South African history. We’re privileged to have this at our doorstep. I think the only next thing to do is to bring my children here to make them understand the story as well” - John Smit, former Springboks captain. 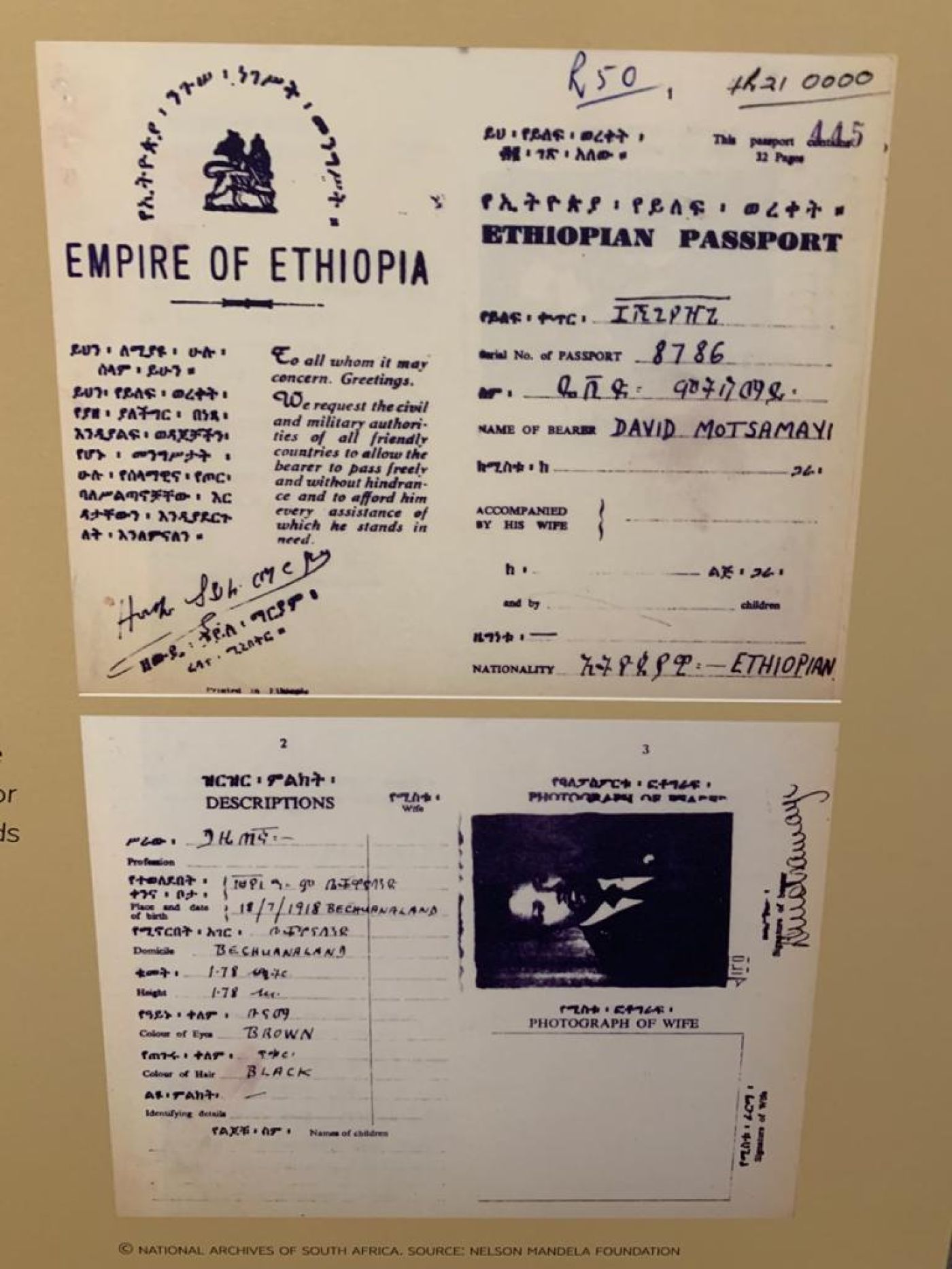 “The Nelson Mandela Foundation is really honoured to be able to bring this exhibition to South Africa. As you know, it started in New Zealand and Australia, now this is the third stop. We are hoping that this exhibition will do the most fundamental thing which is [to] remind us of the responsibility of building the country of Madiba’s dreams… that our institutions of democracy, such as parliament, should not be part of the breakdown of society one parliamentary session after another. I’m hoping that, through this exhibition, we are reminded that Apartheid was, is, and will always be, a crime against humanity because no nation should ever have gone through what we went through, that our woundedness is not just in the visible wounds that we have (for those who died, for those who were maimed by Apartheid forces) but actually even those who do not have visible wounds [and] feel that their dignity is impugned upon through poverty, inequality, xenophobia, gender-based violence [and] the abuse of little children.” - Sello Hatang, Chief Executive of the Nelson Mandela Foundation.

For media enquiries, please contact the Spokesperson of the Nelson Mandela Foundation, Luzuko Koti, at LuzukoK@NelsonMandela.org or on (+27) 082 994 0349.

Sello Hatang speaking at the launch of the Mandela, My Life - The Official exhibition
764258371

Trevor Manuel speaking at the launch of the Mandela, My Life - The Official exhibition
764258806

John Smit speaking at the launch of the Mandela, My Life - The Official exhibition
764258104 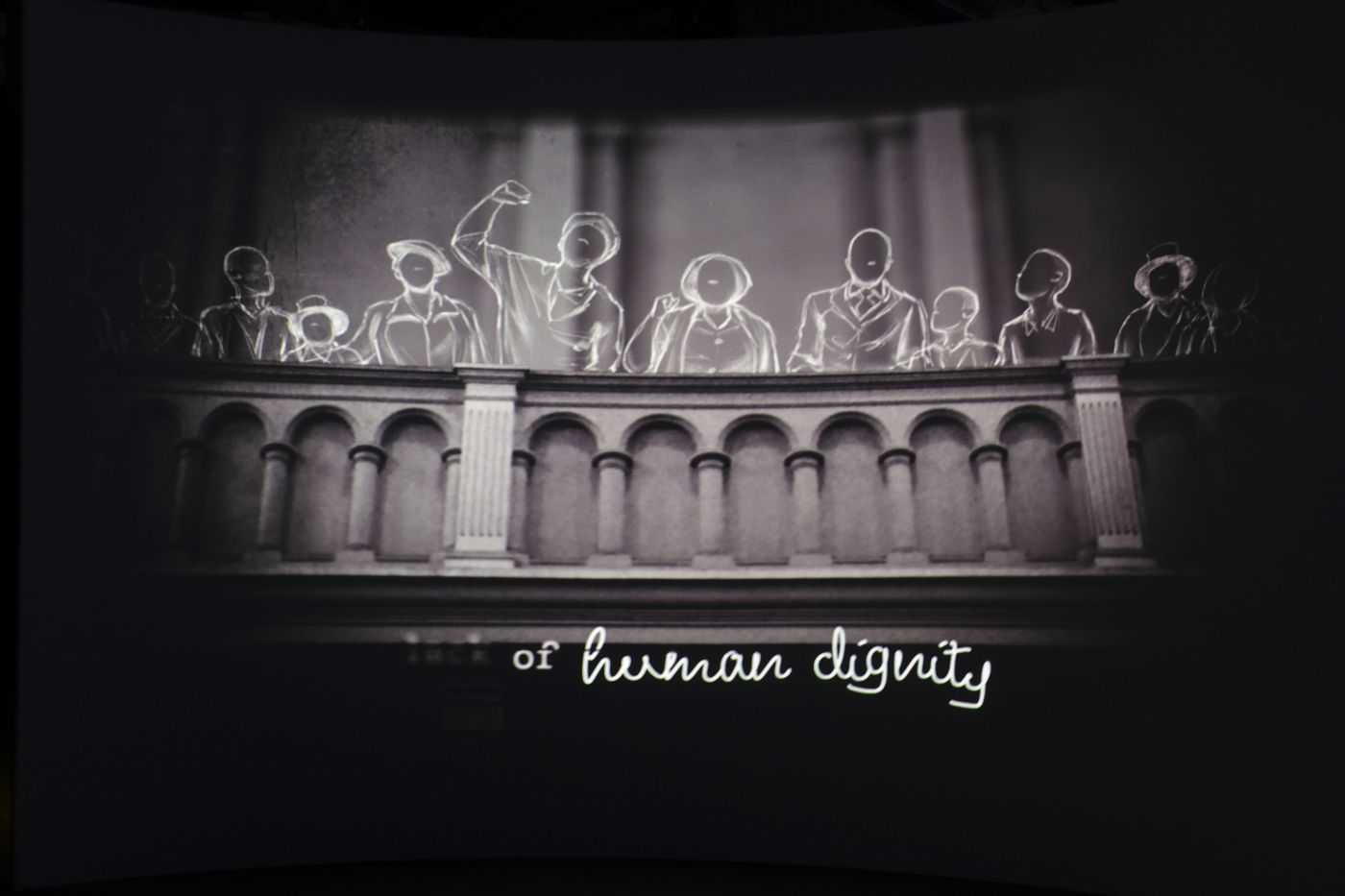