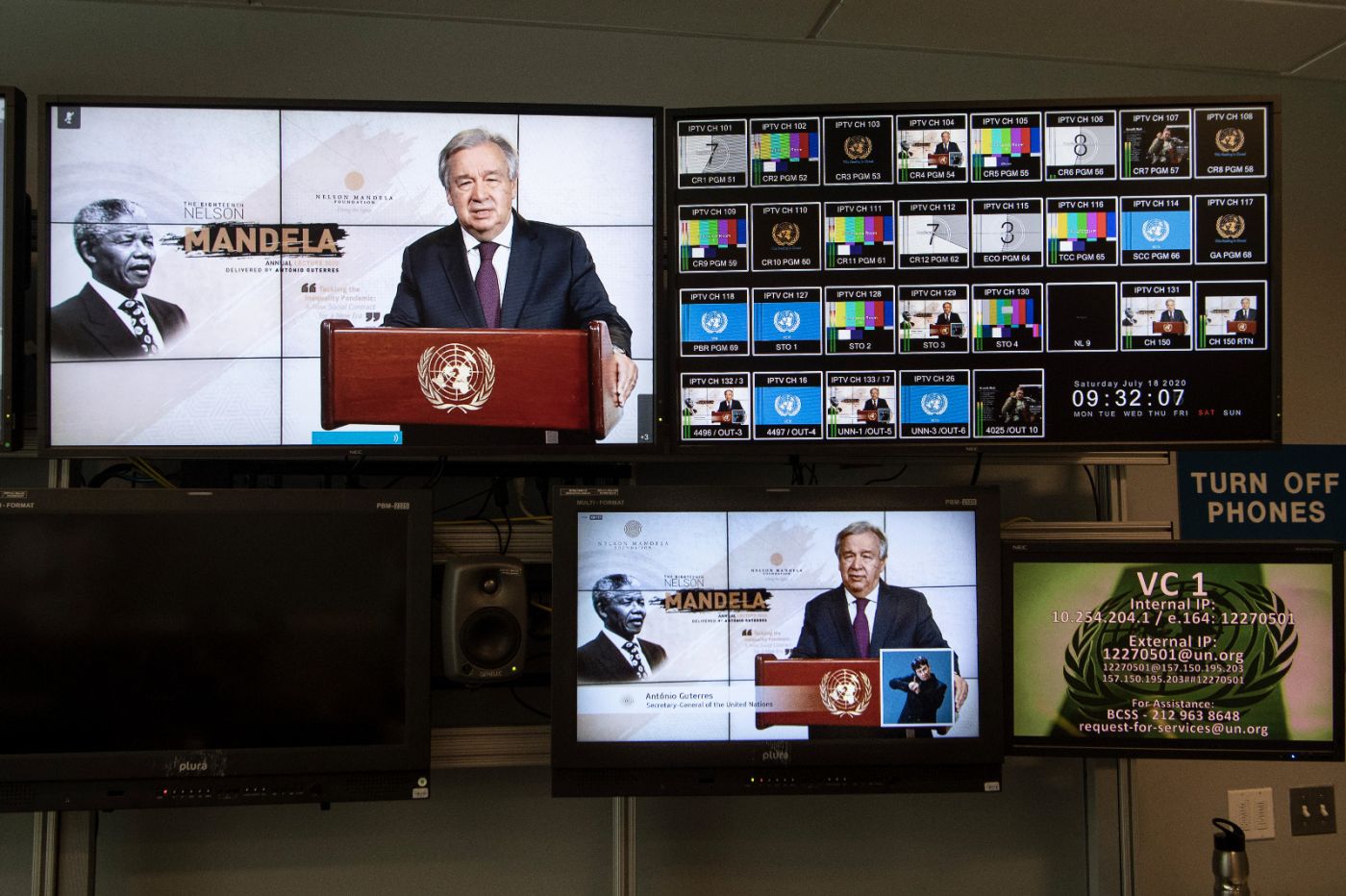 The Nelson Mandela Foundation partnered with the United Nations (UN) today in hosting the 18th Nelson Mandela Annual Lecture, delivered by UN Secretary-General António Guterres on the theme Tackling the inequality pandemic: a new social contract for a new era. COVID-19 imperatives ensured that this was the very first virtual Annual Lecture, with the Secretary-General in New York City and the Foundation team in Johannesburg.

Dedicated to the memory of Zindzi Mandela, daughter of Mr Mandela and Mrs Winnie Madikizela-Mandela, who passed away earlier in the week, the event also featured contributions from President Cyril Ramaphosa, Mrs Graça Machel and Professor Njabulo Ndebele.  Proceedings were facilitated by Foundation Chief Executive Mr Sello Hatang and enriched by powerful musical performances from the Ndlovu Youth Choir and the ONE campaign. The latter premiered the song ‘Stand Together’, performed by 10 artists from across the African continent.

Mr Guterres argued that inequality has become the defining attribute of the early 21st century, something cruelly laid bare by the COVID-19 pandemic. The latter, he insisted, has exposed: “The myth that we are all in the same boat. Because while we are all floating on the same sea, it’s clear that some of us are in superyachts while others are clinging to the floating debris.”

And while humanity can rise to the challenge of the coronavirus, what it will find in the longer term is that “inequality sinks all boats”. To understand this harsh reality, and overcome it, Mr Guterres pointed out, we must reckon with the destructive resilience of colonialism, racism and patriarchy. And we must build a new world order dedicated to the task of dismantling them.

This call was strongly endorsed by Mr Hatang in his closing remarks. He described a global social contract which would draw on ancient human knowledges, be rooted in respect for the Earth, and dedicated to ending inequality and white supremacy in all their manifestations: “What a challenge! What a task! It is in our hands.”

After the Lecture Mr Guterres engaged in a question-and-answer conversation with Ms Nikiwe Bikitsha, well-known journalist, scholar and trustee of the Foundation. This dialogue dimension was another first for the Annual Lecture. Mr Guterres responded robustly to a number of questions which teased out points he had made or pursued lines of enquiry he had introduced.

In her message for the day, Mrs Machel spoke of Mr Guterres with affection and also endorsed his analysis. She closed by invoking Mr Mandela’s words to a new global generation in 2008: “It is in your hands now.”

●       For a transcript of the address by Secretary-General Guterres, please follow this link.

●       For the video of the 18th Nelson Mandela Annual Lecture, please follow this link.

To follow the conversation online, see the hashtag #NMAL2020