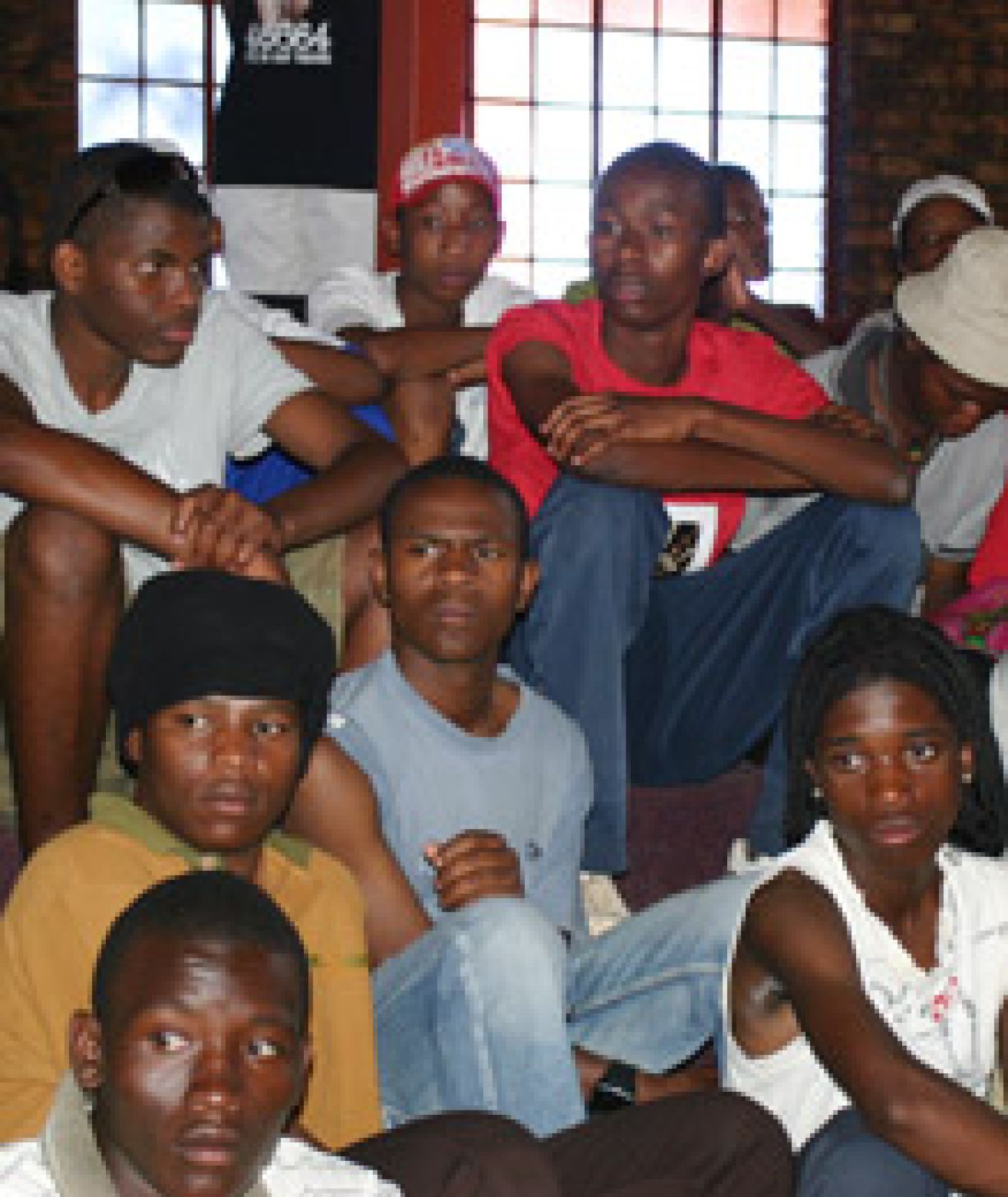 Participants listen intently on the steps of the church.

Dec 1, 2007 – It’s 1pm and about 30°C in Mhluzi, a township just outside the coal-mining town of Middelburg in Mpumalanga, South Africa. People melt into St Peter’s Lutheran Church, ushered in by the loudhailers of the local police announcing an HIV/AIDS awareness campaign in the area as well as by promotional inserts on the local radio station, Greater Middelburg FM (GMFM). The Middelburg event is the third event in a series of community dialogues funded by the Nelson Mandela Foundation leading up to the 46664 concert on December 1, World AIDS Day.

The first two were held in Lerome, a small village in North West, and Giyani in Limpopo. A total of nine community dialogue events - in which communities are engaged to talk within themselves about difficult topics – will be held nationally before the end of 2007, one in each province.

These events don’t come around often, and stigma around HIV/AIDS is rife: locals often use terms such as “Z3” (because it takes your life as fast as the car of that name goes), or “three letters” when referring to the virus. “People just don’t want to talk about it,” says Martin Mokgoapkama, 26, a reporter from the Middelburg Herald. “We still have a mentality that ‘If I attend that awareness [event], my neighbours will think that I’m HIV-positive’.” Nevertheless, the event is reasonably attended, with most of the church’s pews filled with the target age group – 16 to 24-year-olds – as well as a smattering of older folk, making up the 150-strong audience.

Mokgoapama says he doesn’t know the infection rate in the town and has never written an article in which someone has spoken about their HIV status, despite Mpumalanga’s estimated 15% HIV prevalence rate. “It’s my wish to interview or do a story on an individual who is actually infected by the disease,” he says. “It’s very rare to find people talking about their status. There are people that I know personally, you didn’t know this person was infected. Then the next thing you hear, he’s in hospital, then in a critical condition, then … sadly he’s passed away.”

Inside the church hall, the music begins to blare and Mokgoapkama hurries back inside to capture his second HIV/AIDS-event story of the year. “These awareness campaigns are still considered soft news,” he notes. 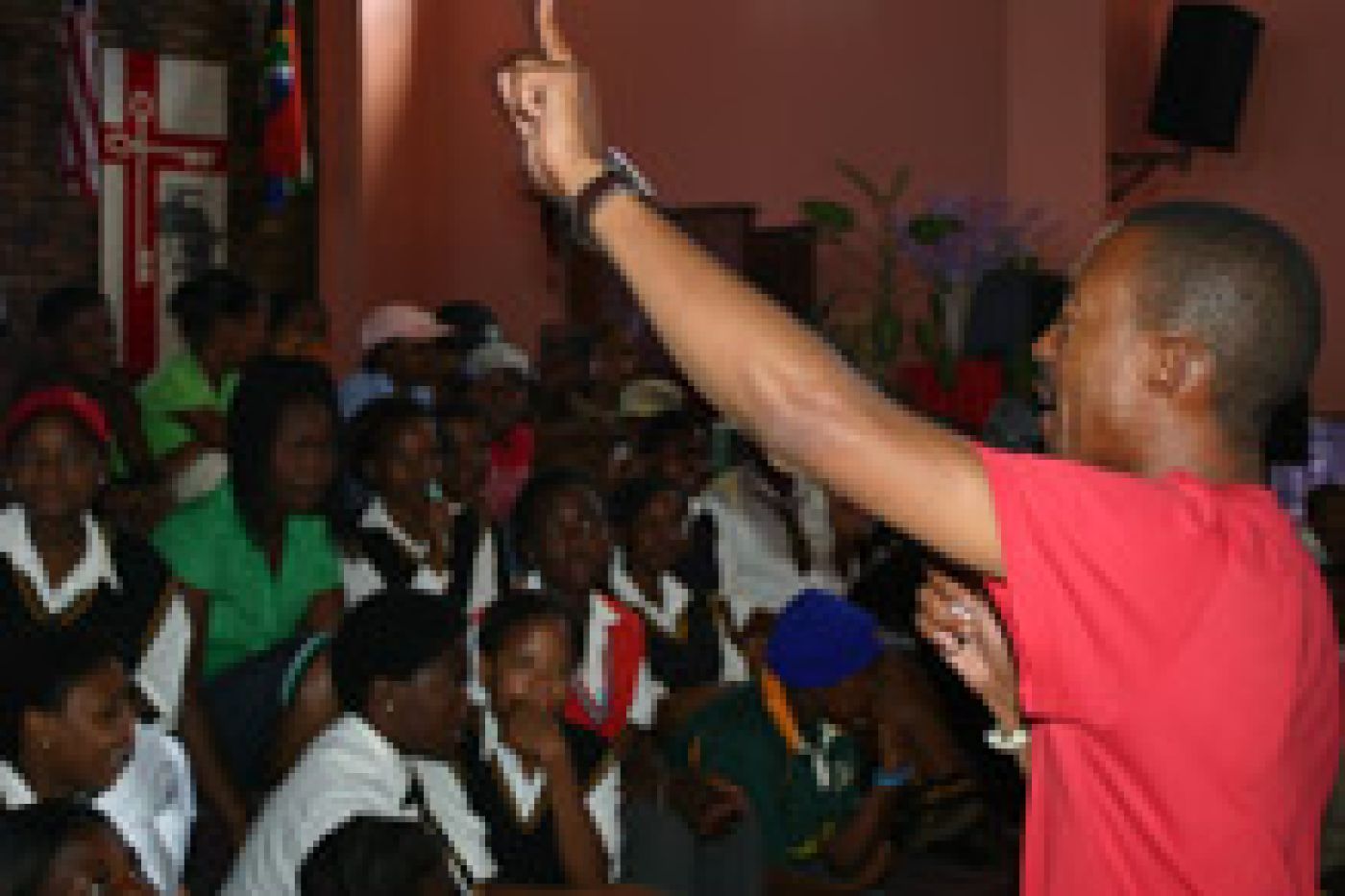 Facilitator Lesley Nkosi says every community has unique issues that only it can solve.

There are no celebrities, no VIPs at this dialogue event. The VIP area has been taken over by prisoners and wardens from the nearby Witbank correctional services facility. Unshackled and dressed in matching suits, they’ve been invited to share their stories with the youth. There are rumours that the premier may arrive, but there’s no waiting for dignitaries. The event begins at 1pm, on time.

“When you go into it, you’ve got to be really open-minded to whatever possibilities there can be,” facilitator Lesley Nkosi says. “All you’ve got to do is make sure that you encourage people to talk about their issues to each other and not to me.”

“We’re taking the responsibility of HIV/AIDS back to the community through young people,” he continues. “We’re trying to establish the unique problems with regard to HIV and AIDS in the communities … and then see if we can come up with specific, unique solutions to these problems and then have the youth make unique commitments.”

One of the prisoners, “Senzo”, stands up and reads his poem, How could I have been so irresponsible?:

“I mean, constant, cautious reminders ran through my ignorant skull … / They were simple as ABC / Which was abstain, be faithful or condomise / But no, I chose to jump to DEF / Which is drink more liquor, expel her assertivity and force yourself into her ...” 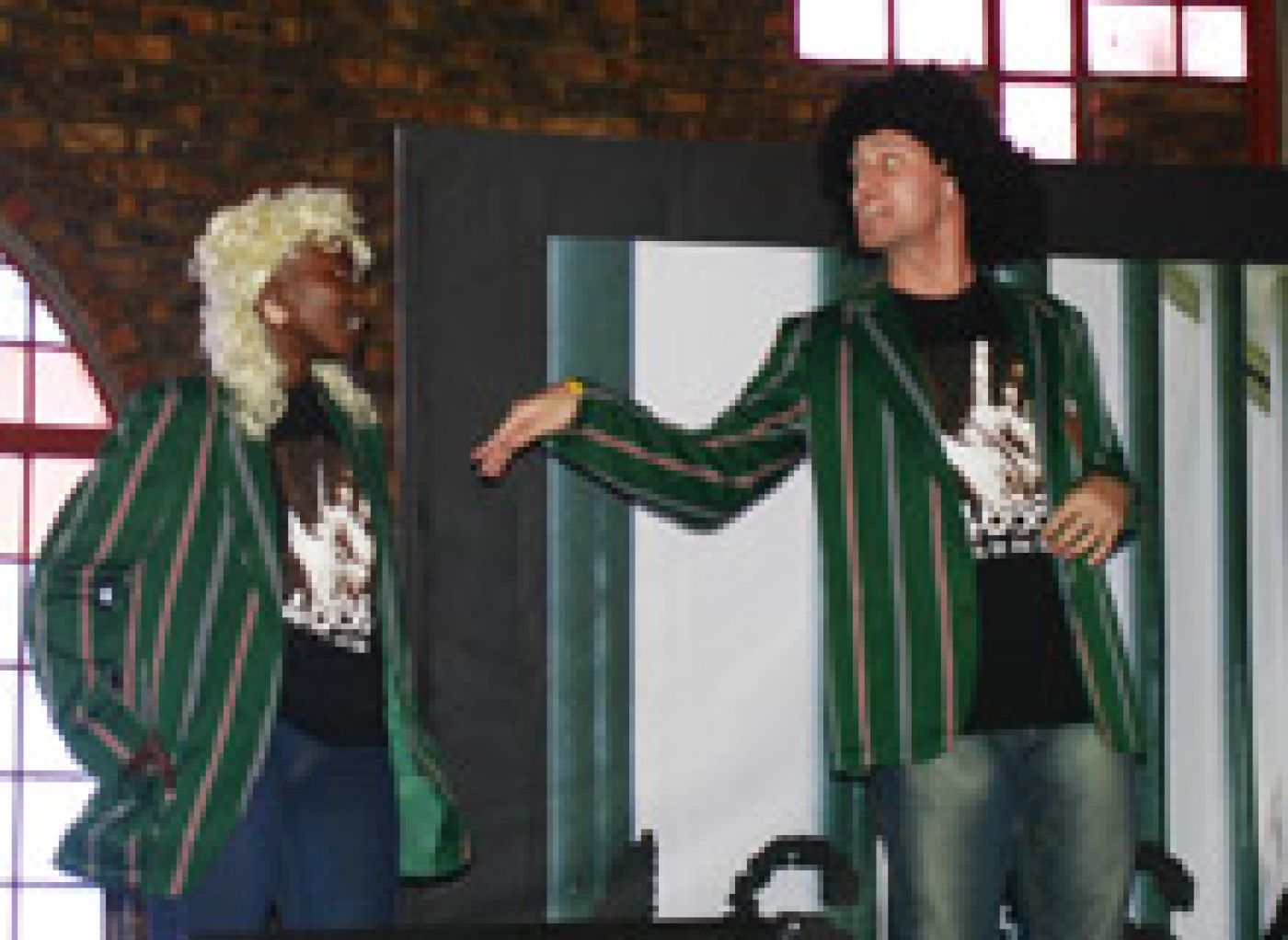 Actors play out real-life scenarios in a frank and humorous way.

A troupe of 46664 actors begins their play, Khululeka, mixing humour with contemporary beats as they promote common prevention messages. “Can you get HIV from touching someone’s hand?” an actor asks the audience. “No,” comes the resounding call. “Okay, this is a more difficult one. Can you get HIV from a mosquito bite?” Yeses and nos compete. “Ahh, so we do have a lot to learn,” the actor replies. The play ends with instructions on how to put on a male and a female condom. The female condom draws whoops of laughter from the audience. After the play, Nkosi calls the audience to the front of the church. Nobody moves out of their chairs. He pleads again and then finally instructs those sitting at the back to take a position on the front steps leading to the stage. A conversion is taking place – audience members are becoming participants.

Nkosi doesn’t often ask questions. In fact, he lets the participants both ask the questions and answer them. The roving microphones filter up and down the rows of people, snapped up by outstretched arms. Nkosi does have a rule though. Before someone can make a point, they have to identify themselves and say “Togetherness”, to which the participants respond “ke ntho e monate (is a nice thing).” Some forget to stand up, to which the participants respond: “Uzivese sikubone (show yourself so we see you).” He also encourages participants to use inclusive terms such as “we” and “us”, instead of “they” and “them”, to emphasise their togetherness. Issues around the future aspirations of the youth come up often, clearly a central concern for those living on the outskirts of a small town. “Be sure of what you want to be,” says one participant. “Be a first-class version of yourself, not a second-class version of someone else,” says another. Everyone seems to have a catchphrase, a slogan they’re holding onto.

The issue of “sugar daddies” – rich older men who reward their young girlfriends with gifts and money in return for sex – is raised. “What I see is that girls are easily influenced with a lot of things. Most girls like nice things and like things they know they don’t have. They come from poor backgrounds but they are going to look for guys with cars,” says Tshepo Makama.

Thuliswa Thomas agrees. “I would like to protect our ubaba (fathers), I’ve been hearing about fathers that are 48 and 38. These fathers have done nothing wrong, it’s our forwardness as girls going after a man that’s 38, what are you expecting from that man? “Secondly, a 38-year-old man doesn’t love you, he just wants to make you a trophy for the time being and [then] you want to say no to him when he wants to sleep with you, when you were the one who went after him?”

The crowd heckles her. “It’s not that girls are forward; boy you’ve got sweet words so that we girls can be pressured,” says Hlengiwe Hlazo. “A guy can pressurise a girl with anything, sweet words, you can buy her a gift and if the girl is stupid enough they will be pressured.”  Nkosi says Lerome’s youth focused on issues around “aspiration”, specifically youth who have transactional sex with “sugar daddies” (rich older men) who work in the mines. “The guy is going out with six other girls in the community, but because you can buy me nice shoes and nice clothing, I don’t mind … But these guys also have the power to say, ‘why would you want me to wear a condom, don’t you trust me?’ You could imagine with older people, they don’t believe in using condoms.”

Getting the message through 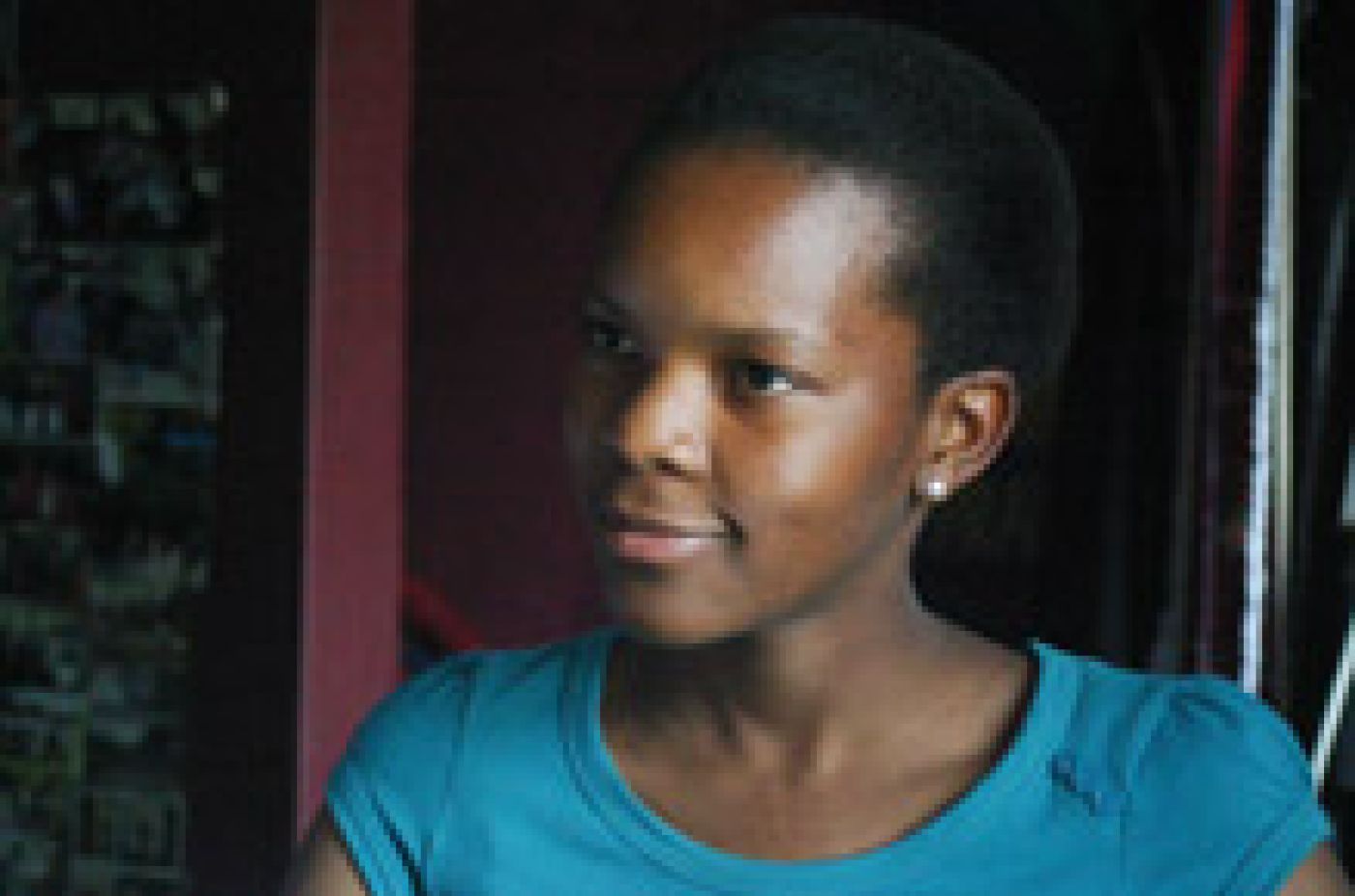 Maleke Hlabyago says celebrities should share experiences rather than performing.

In a smaller session after the main dialogue, Nkosi interviews a group of teenagers. Maleke Hlabyago, “17 turning 18 next year”, tells him that celebrity-driven music “bashes” in their area don’t work to drive behaviour change. “People … we … will go there not having an aim that we are going to get more information, or get some more details on HIV/AIDS, but we are going to go there because some stars are going there.

“Say for example they say Zola is coming, Chomi is coming, we’re going there for those celebrities, we’re not going there to get more information or to get enlightened.”

She says a public talk show in the community would be better. “But I do not want them to come and point fingers … rather than them performing, they should speak about their experiences, and they shouldn’t make up experiences,” she says.

Themba Ntuli, 16, says HIV/AIDS messaging creates fear in some minds. “Although they were trying to voice out or they were trying to sell the idea to people [about the dangers of AIDS], it made them scared. Instead of making them conscious of it, they are more scared of it.”

Ntuli and Hlabyago host a show on local radio sponsored by the HIV/AIDS non-governmental organisation loveLife, that discusses issues that concern young people in the area, especially HIV/AIDS. “I’m trying by all means to make it appealing for them to accept it, for them to be keen on it because they are running away, because of the way we introduced it to them [as] a killer disease,” says Ntuli. 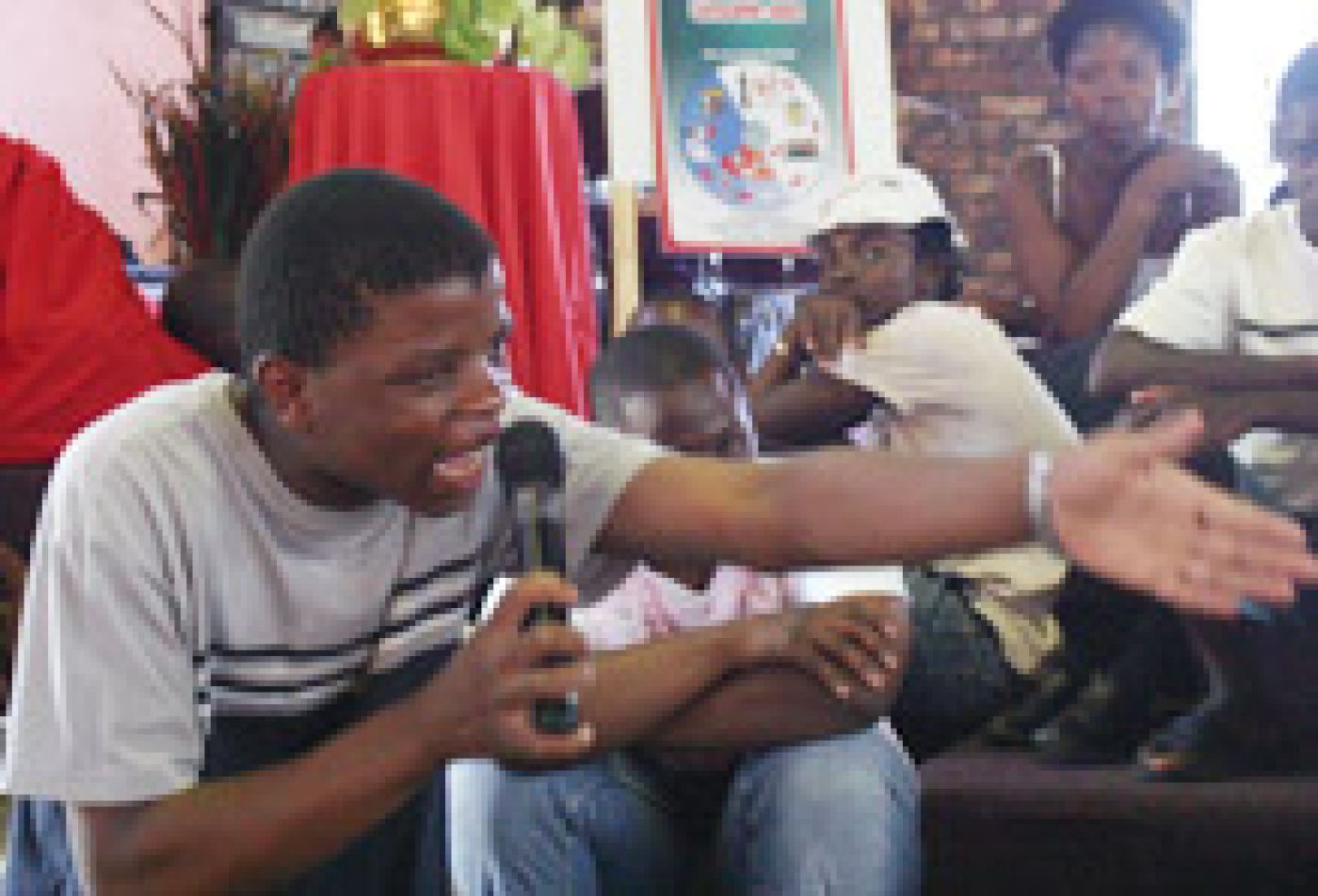 Themba Ntuli says the community shouldn’t be scared of HIV and AIDS.

Mlungisi Sindani, 15, agrees. “The first time I knew AIDS it was of Nkosi Johnson. Nkosi Johnson was about to die, or was thin, that image is still in my mind, that when I have AIDS obviously I’m going to lose weight, all that pain and everything.

The organisers have purposefully chosen small towns and villages in South Africa for these dialogue sessions, in the hope of making meaningful impacts in often neglected places. “We wanted to choose areas that are not saturated,” says programme manager Sipho Nhlapo. “Who funds projects here? … If you find five, you will be extremely lucky. 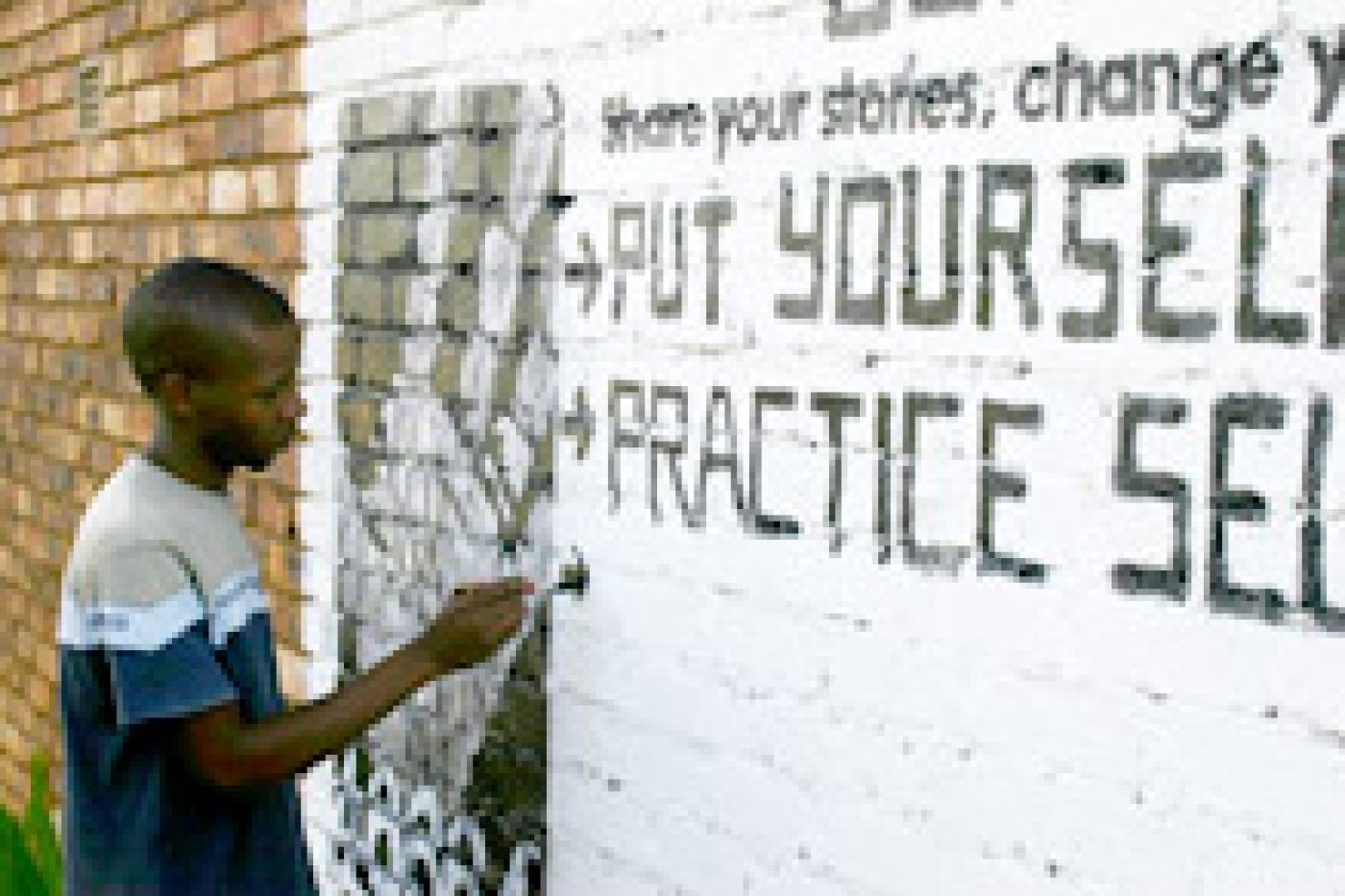 “There’s only so much you can do on television and on radio, but our focus is to engage communities directly. When we engage them, we don’t come with a bible to preach to them. We bring the play that highlights issues around HIV and AIDS, and then communities engage and say what their problems locally are and what they think is the best way of dealing with their problems.”

A mural is painted on a public wall after each event; as the team leaves Mhluzi for their next small-town destination, a local artist paints: “Put yourself first; practise self-control; be …”