July 7, 2008 – The Nelson Mandela Foundation and Jacana Media launched Hunger for Freedom: The Story of Food in the Life of Nelson Mandela at a sumptuous banquet outside the Constitutional Court in Johannesburg on Saturday, July 5.

The book, described as a “gastro-political biography” by author Anna Trapido, explores Mr Mandela’s hunger for freedom in a literal and metaphoric way, linking stories from his childhood, his life as a world statesman and his retirement with the food that he ate and the people he ate with.

In the glorious Johannesburg midday sun, invited guests tried everything from roast lamb on a spit – managed by Alexi Bizos, son of the anti-apartheid lawyer George Bizos – to struggle hero Laloo Chiba’s Christmas cake, getting a taste of the food that South Africa’s most celebrated statesman has enjoyed.

Although Mr Mandela did not attend the launch, the Mandela family was in attendance, including his daughter Zindzi and grandchild Zoleka, who organised the launch event. One of his other daughters, Zenani, was there as was Mr Mandela’s former wife Winnie Madikizela-Mandela.

“What was very nice was to see how much Madiba is a product of an astonishing generation of activists,” said Trapido. “Of course he’s an astonishing individual, but everyone around him was completely fabulous too, and those were some really some amazing dinner parties.”

Trapido, who is an anthropologist, chef and food writer, said the book had brought new voices into the liberation story, revealing unsung heroes like the Naidoo family, who cooked every day for the Treason Trialists. “What I hope that this book does is put the people who literally fed the struggle against apartheid back into the story.”

After Trapido got the idea to write the book, she began her research at the Nelson Mandela Foundation’s Centre of Memory. She started reading his prison letters which she described as “so foody”. “He uses food and food metaphors all the time to talk about love, and passion and missing people, really because all these letters are being censored … you don’t want to write in a very intimate way if you know that all your love letters are going to be read by somebody else.”

“The significance of this book is that in many ways it’s a map of his life,” said Achmat Dangor, CEO of the Nelson Mandela Foundation. “It documents what food he ate as a child, what he ate when he moved to the city, what he ate with the people he liked and the food that he was forced to eat in prison.”

Along the way, Mandela’s broad tastes – from pig’s head to crab curry – reveal his interaction with a cross-section of Southern African society. “The choice of the food is quite eclectic,” said Dangor.

Addressing the audience, Zindzi Mandela said the book had enabled the family to reconnect with old friends. “It has been at times an emotional journey. It’s brought people back into the circle.”

At times, she said, it had allowed her to “confront one’s ghosts”, reflecting on times of difficulty during her childhood.

Former anti-apartheid activist and political prisoner Ahmed Kathrada, a noted historian, was pleased to be at the event. “I have to make up for 26 years without good food, and I take every opportunity to do that,” he joked.

Kathrada cautioned, however, that although many of the meals in the book were tasty, “we dare not forget the prison years”, during which Mr Mandela ate prison food – porridge and soup for breakfast, boiled maize for lunch, and porridge and soup for supper. And, of course, there was no bread for African prisoners, said Kathrada, a powerful reminder that food and politics are often intertwined.

Hunger for Freedom: The Story of Food in the Life of Nelson Mandela is available in hardcover (recommended retail price R300) and paperback (RRP R225) from all major South African bookstores. 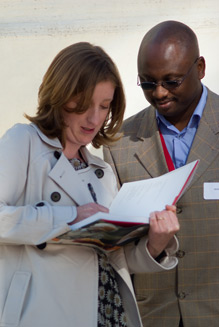 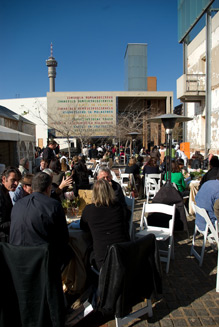 The launch banquet was held outside the Constitutional Court in Braamfontein, Johannesburg 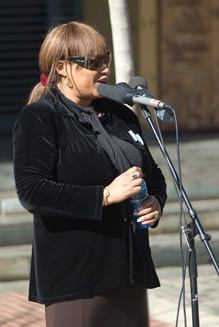 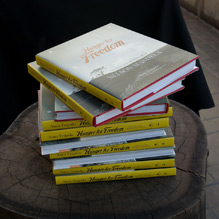 Hunger for Freedom is available at all major South African bookstores