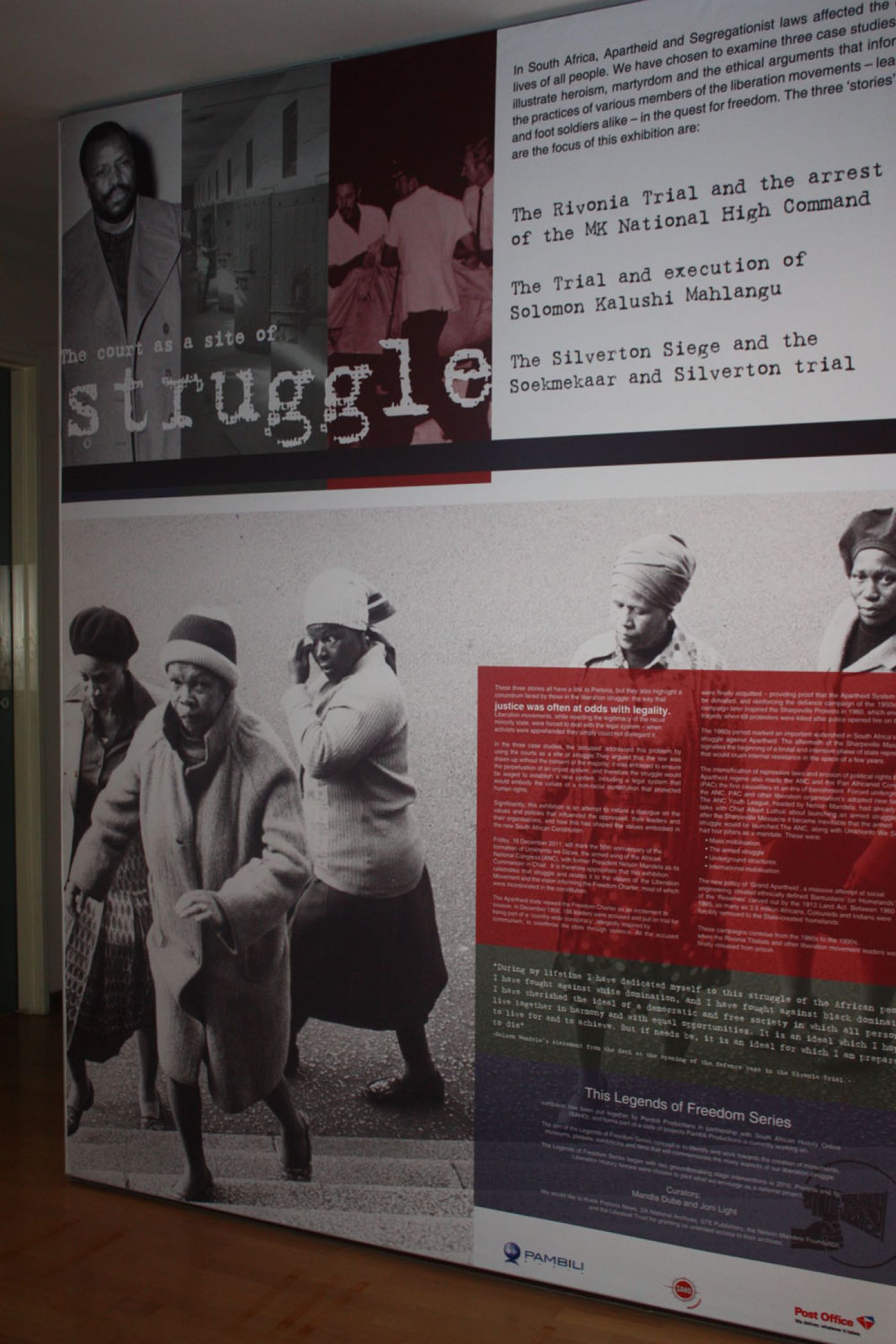 15 June, 2011 Tuesday saw the opening of a new exhibition to mark 50 years since the formation of the Umkhonto weSizwe, the armed wing of the African National Congress. In Pursuit of Liberty: Legality vs. Justice was launched at the Nelson Mandela Foundation in association with Pambili Productions and South African History Online (SAHO).

The exhibition depicts apartheid-era courts as sites of struggle. The three ‘stories’ that form the focus of the exhibition are: The Rivonia Trial in which Nelson Mandela and seven comrades were sentenced to life imprisonment on 12 June 1964; the trial of Solomon ‘Kalushi’ Mahlangu and his three co-accused which ended on 1 March 1978. Mahlangu’s execution on 6 April 1979; the Soekmekaar and Silverton trial in which on 27 November 1980 two accused were sentenced to death and six others to jail terms of between 10 and 20 years. 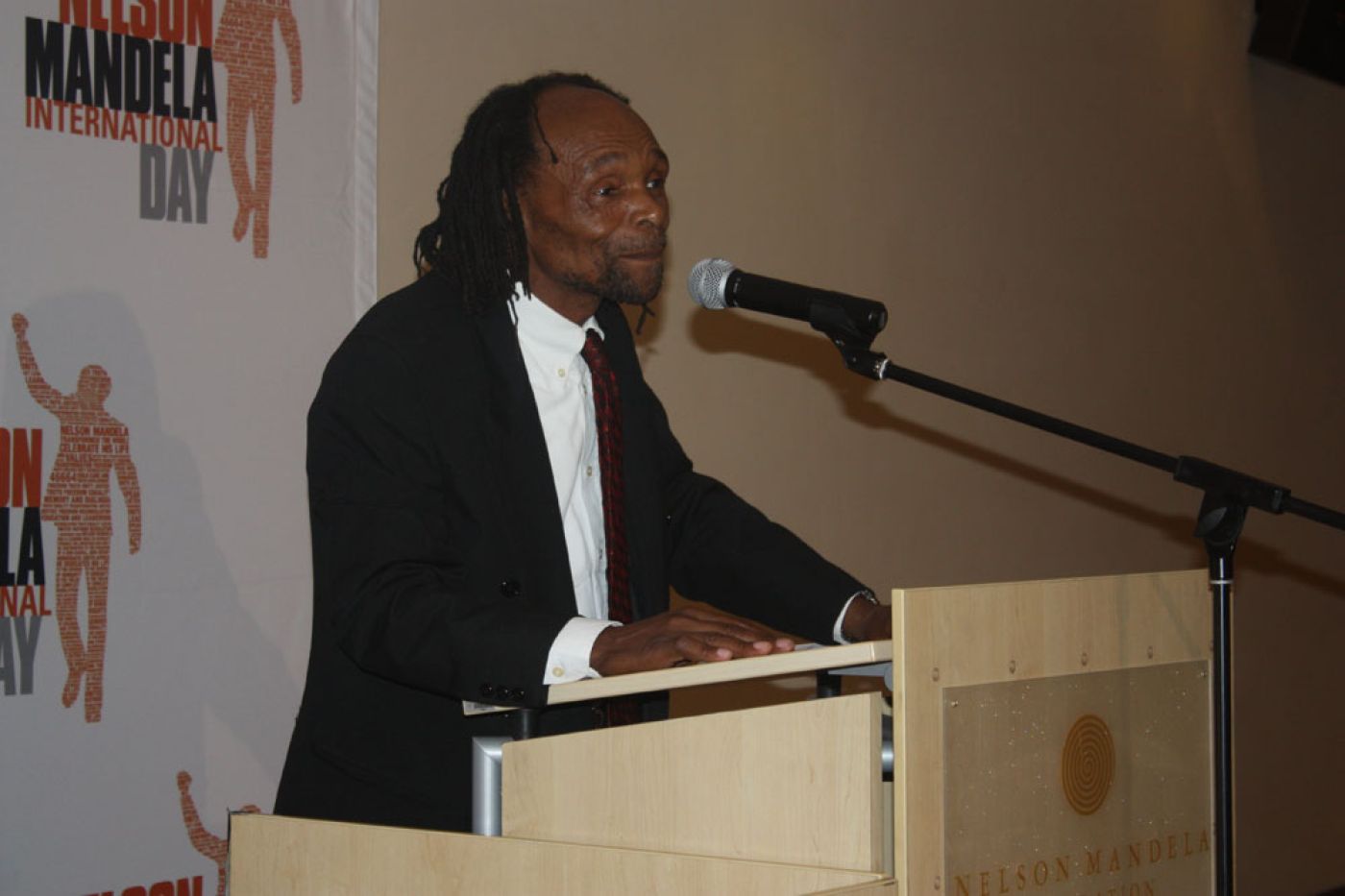 Dangor said the exhibition highlighted how during apartheid, legality often impinged on injustice and that the law, in itself, became an instrument of oppression. Keynote speaker James Mange who was sentenced to death for plotting to attack a police station in 1979, later had his sentenced commuted to 20 years in prison, spoke of the aims of Umkhonto weSizwe (MK) soldiers. “We were trying to transform this society into a just society.” MK operatives wanted freedom for all South Africans, regardless of colour: “The entity that is freedom has no colour,” Mange said.

Focussing on the struggle that the current generation faces, he said: “Today, we have to revisit where we came from [...] Your responsibility is tenfold compared to ours.” Deputy Minister Ayanda Dlodlo, herself a former MK cadre said: “Many people don’t realise that South Africa was at war with itself [... ] Ours was a just war and one that should be celebrated.” Guests then heard from various supporters and sponsors of the exhibition, including MEC Norman Mokoena, the SABC’s Leo Manne, the South African Post Office’s Vuyo Mahlati, and exhibition organisers Mandla Dube and Joni Light.

The exhibition will remain on display at the Nelson Mandela Foundation in Houghton till November 2011. For more details please contact us.

“People need these kinds of exhibitions. But the history is not complete yet.” – Ike Maphoto, a former Umkhonto weSizwe soldier

“The exhibition is great because it’s based on evidence and research that has been done. It touches on the broader names that we hear every day as well as those that we don’t hear of. It brings together history, heritage and culture under one banner. It is a must see.” – Vuyo Mahlati, Chairperson South African Post Office

“The exhibition gives me mixed feelings. I am touched by the history and the evidence of how the system deterred our comrades, and I am inspired by Umkhonto weSizwe and the role they played in bringing freedom to us, the fearless and courageous men and women who were selfless enough to fight for our freedom, the unsung heroes and heroines of that time. We owe them a lot. We are indebted to them for life.” – MEC Norman Mokoena