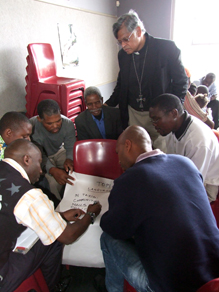 May 26, 2009 – The Nelson Mandela Foundation’s Centre of Memory and Dialogue, through its social cohesion programme, works on delving deeper into the underlying causes of fears and perceptions of “the other”. It seeks to convene communities and catalyse leadership to create sustainable solutions in Africa and indeed, in the world.

As part of this continuing engagement with communities, the Foundation convened a community conversation in Cato Manor, KwaZulu-Natal on Saturday May 23, 2009. The event also acknowledged Africa Month and Africa Day (May 25), which commemorates the establishment of the Organization of African Unity.

Attended by residents of Cato Manor and surrounding areas, as well as representatives from various community organisations, the event aimed to identify and address the underlying causes of anger and frustration in communities affected by incidents of xenophobic violence.

Ken Mutuma, an implementing partner for the NMF’s dialogues for the promotion of social cohesion, explained that the community conversations were in their pilot phase and, in addition to the dialogue at Cato Manor, would take place in Albert Park and KwaMashu, both in Durban, KwaZulu-Natal, as these were the areas most affected by the outbreak of xenophobic attacks in May last year.

“This is the starting point and we believe that the answers to the problems we face lie within the communities,” said Mutuma.

“We come in, not as experts, but to listen and let communities generate their own solutions,” he added.

Facilitating the day’s conversation was Dr Lucas Ngoetjana, head of advocacy at the KwaZulu-Natal Christian Council, one of the partner organisations in the province.

“We’ve been able to bridge the gap between communities using the tools developed from the Community Capacity Enhancement (CCE) methodology,” Ngoetjana said.

KwaZulu-Natal Bishop Robin Phillips said, “I am here because I support bringing people together to have a dialogue.”

Phillips explained that South Africans had not always welcomed foreign nationals. “Instead of accepting them, we have rejected them and sometimes we have done that violently.”

He was positive that the community conversation was the beginning of the end of conflicts between the locals and foreigners.

“Today we are being asked to talk to one another and I think we as Africans are very good at talking,” he said.

“All the issues that were raised were important and we need to link our hands together to reduce unemployment and crime to open up opportunities, especially for the youth,” said Chili.

This, according to Chili, will help foster unity between South Africans and foreign nationals in South Africa.

Nkwanyana said that he hoped this programme would create opportunities for social dialogue and “solutions at the grassroots level”.

“The purpose of today is to strengthen our relationships … In one way or another we are living together as friends, neighbours and colleagues,” said Baruti Amusi, one of the participants in the community conversation.

Community conversations to promote social cohesion have taken place in Khayelitsha, Cape Town and New Brighton, Port Elizabeth.  The community of Delmas, Mpumalanga will hold a conversation on Saturday June 6, 2009 and the last conversation this month takes place in Atteridgeville, Gauteng on June 20, 2009 – World Refugee Day. 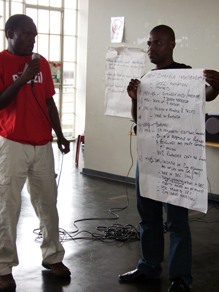