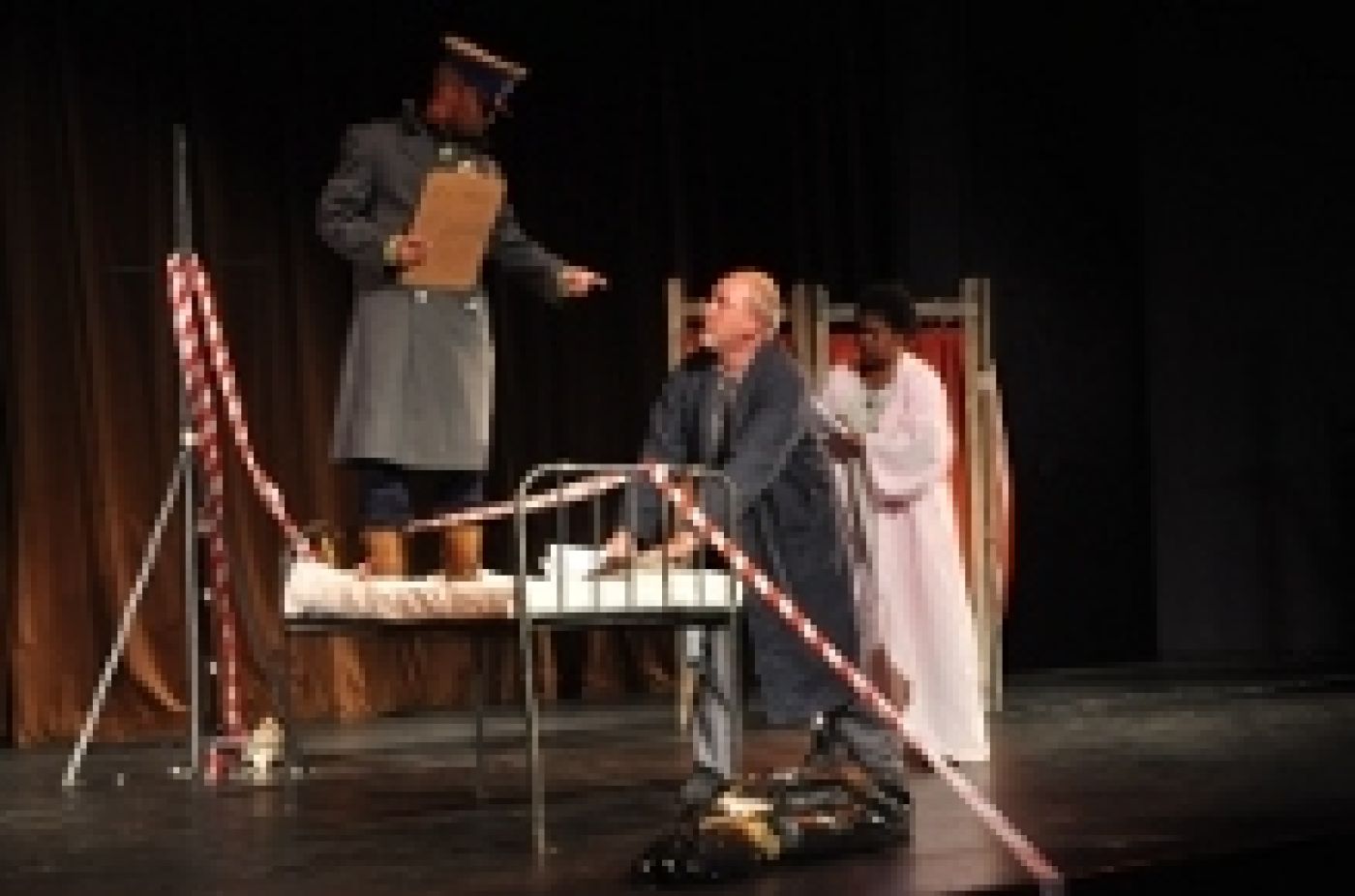 A scene from Ariel Dorfman's play Delirium was performed at the event.

Dorfman has been in South Africa for over a week and has spent his time engaging with students, academics, authors, writers and artists on a broad range of topics, from reconciliation to xenophobia and the role of art in fighting oppression and deepening democracy.

Yesterday’s conversation, between Dorfman, Gordimer and Kani and facilitated by Nelson Mandela Foundation CEO Achmat Dangor, focused on the role that protest theatre can play in influencing history.

Prior to the discussion, Kani read an excerpt from his play Nothing but the Truth and Warona Seane, Makhaola Ndebele and Dan Robbertese performed a snippet of Dorfman’s as yet unpublished play, Delirium.
Delirium follows the experience of a couple whose house and lives are suddenly separated by a border, and documents the human complexities that are borne out of this arbitrary division.

Wits University’s Head of Dramatic Art Warren Nebe introduced the topic of protest theatre and reconciliation, saying: “Today we meet at a crossroads, a space that begs the asking of critical questions of a country imagined. We can no longer waste time reminiscing about what reconciliation could have meant in 1994. What we can do is interrogate reconciliation today, within a constitutional democracy. The role and place of art in contemporary South Africa is, more than ever, critical.”

Dorfman opened the discussion by saying: “It has been an exciting experience to be part of the audience and to realise that I have written a play for South Africa too.”

Dorfman explained that he would love to have lived in a time in which he could write comedies, but that the reality of the time and circumstance into which he was born dictated otherwise. Instead, he said: “I feel that it is necessary to write plays about the extreme circumstances in which we are living.”

He explained that Delirium is a dark comedy about the current times in which tens of millions of people are migrants moving across borders, from one town and to another.

He spoke too about how the play isn’t just about migration and refugees, but that it also a staging of his own self, of the pull of multiple identities. He made mention in this regard of his “rigidity” growing up as he tried to define himself as only one thing for fear of being “a hybrid”, “a mongrel”.

Gordimer responded to Dorfman’s remarks, saying: “What this play makes clear is how certain situations occur across the world. This play at its base is about xenophobia. We call it xenophobia but it is [also] about the enormous difference between the haves and the have-nots.”

She then moved on to talk about how Kani’s play Nothing but the Truth raises the issue that, in post-apartheid South Africa, “We celebrate the heroes [of the struggle] but we don’t celebrate the ordinary heroism of the people who were left behind.”

Following on from Gordimer, Kani spoke about the relationship between forgiveness and justice in South Africa after apartheid, wondering aloud if these two are mutually exclusive while drawing comparisons between different systems and understandings of justice.

The discussion was then opened up to the audience, who were encouraged to ask questions.

A question from the floor looked at why the play Delirium was staged as it was and if Dorfman was influenced by the border issues between Mexico and the United States.
Dorfman explained that the play was initially written in a far more abstract form and that he then rewrote it with the Mexican-United States border in mind. However, he continued, it is a story that is meant to be adaptable to any location.

He said: “I am delighted by what [the actors] did and equally [with] your reaction to it. Your laughter indicates that you share an enormous amount [with the play] and that South Africa is going through similar things to things that are happening throughout the world.”

Adding to that, Kani noted: “My God, the world is one village. If we speak of suffering, we speak of world suffering, not just Soweto or New Brighton suffering.”

Another audience member asked: “How influential are plays and art in changing minds and bringing about change?”

Gordimer replied: “There is a phenomenon in our culture of the arts here – that in the new South Africa there are enormous changes and [yet] since 1994 there has been a decline in the number of novels and short stories. I have been waiting to see what authors tackle in the present but it seems that is has been left to the theatre to deal with the present.”

“We are now looking to theatre as a new means to rouse people to think about who we are, and where we come from.” Surmising about why one art form should be more overtly concerned with present-day politics, she continued, “Maybe theatre is more accessible and is a more natural way of talking to one another.”

When Kani was asked how to teach children in the democratic South Africa about justice and reconciliation, he said: “Through art. The only thing we can do is be persistent and actively intervene as parents to teach our children about our past.”

Dangor commented that in South Africa that there is a “painful past that we still need to explore” and that writers shouldn’t be hesitant to challenge authority. He implored writers to remember that “the struggle isn’t over”: “We act as if, in 1994, one era ended and another began, but our [past and our] future is on a continuum.”

Professor Njabulo Ndebele, an esteemed academic and author who attended last night’s event, said: “I think that, first of all, this [was] a very good panel. They had strong inputs that got us in a reflective mood.

Secondly, the two performances – the first by John Kani and the second, Delirium – are both most relevant to the times. Quite clearly the issue of reconciliation remains highly topical for South Africa citizens trying to find their voices again.” 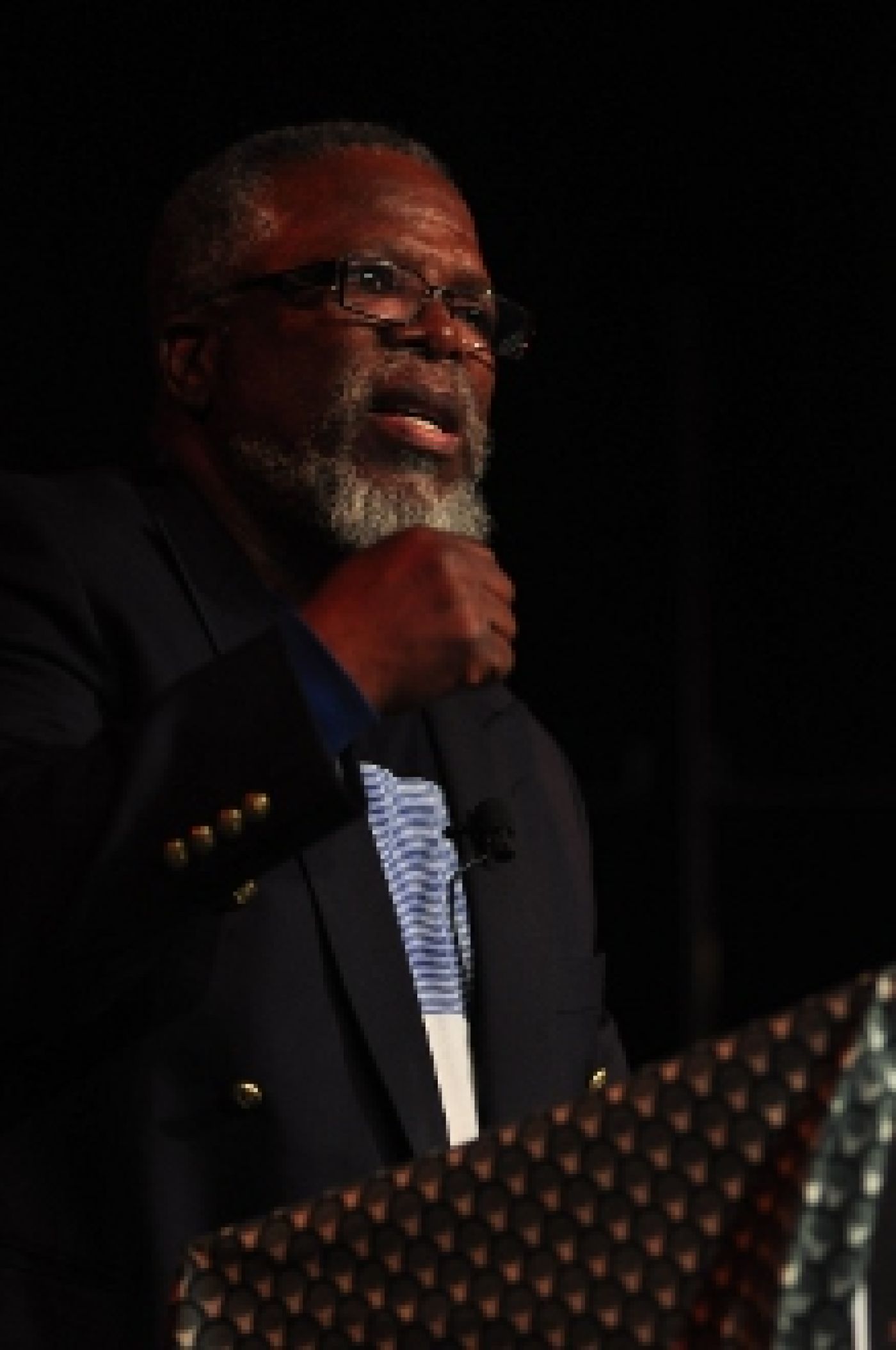 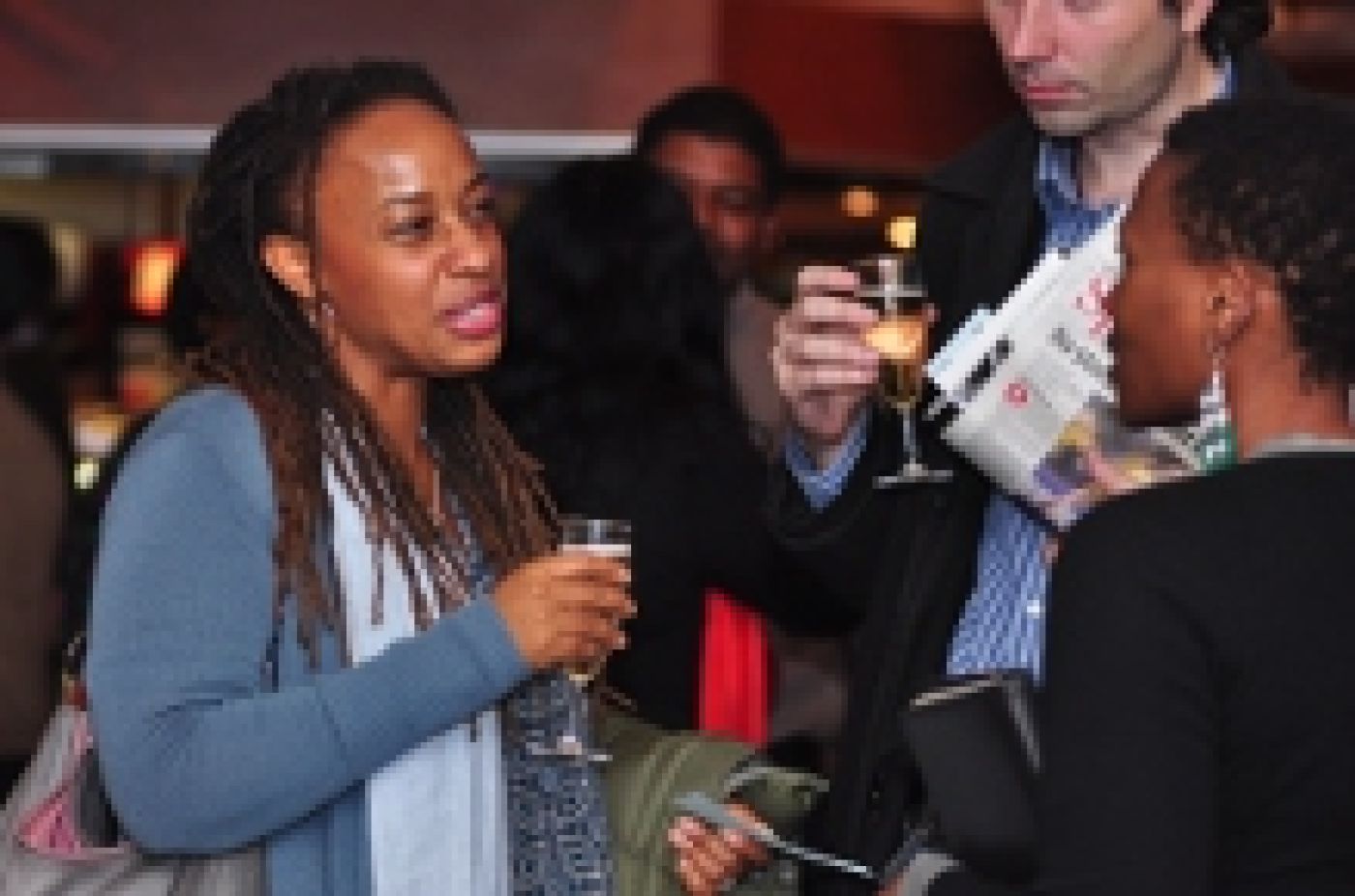 Guests mingle before the dialogue event 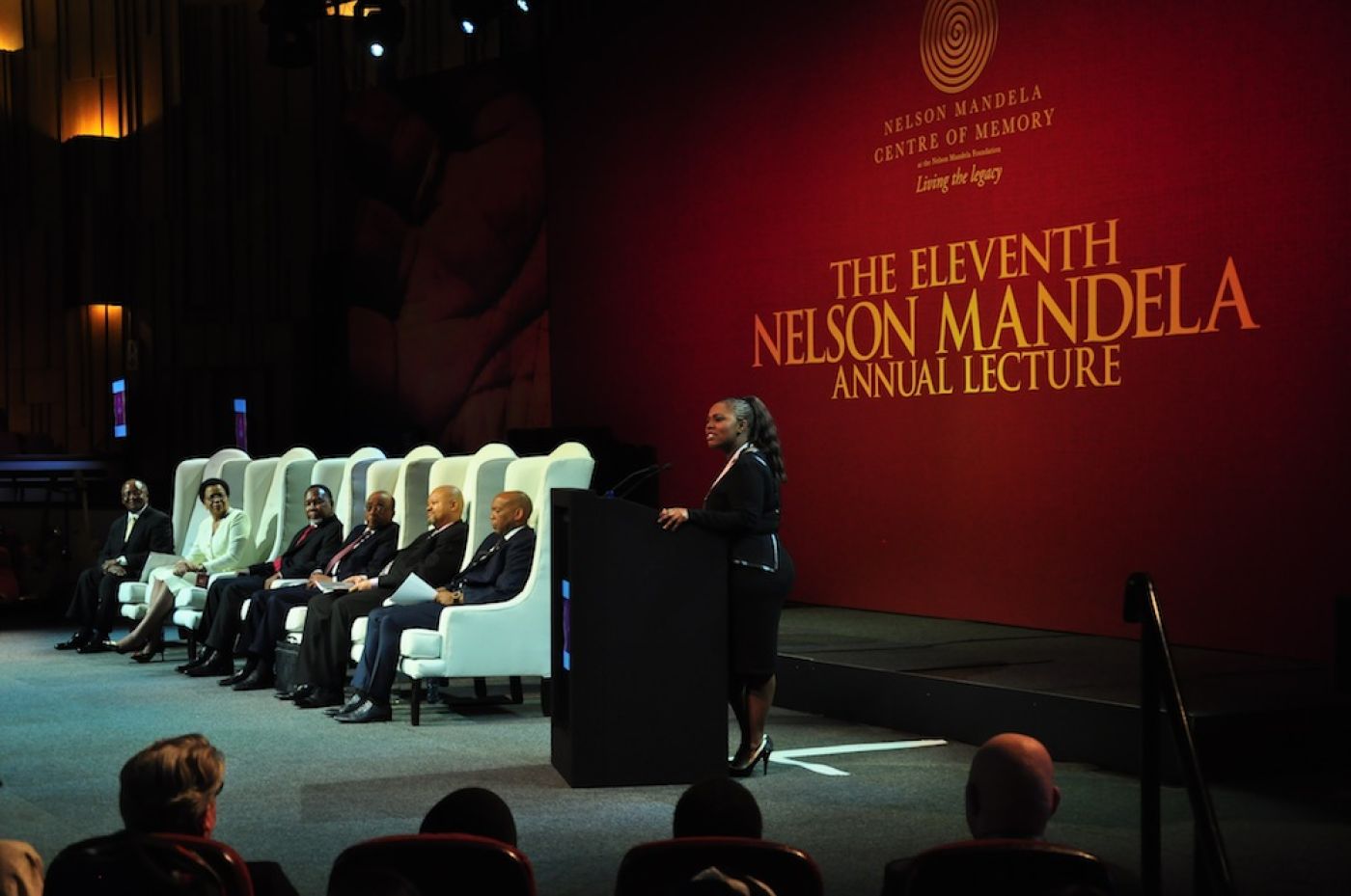 The audience was made up of artists, writers, students and the general public 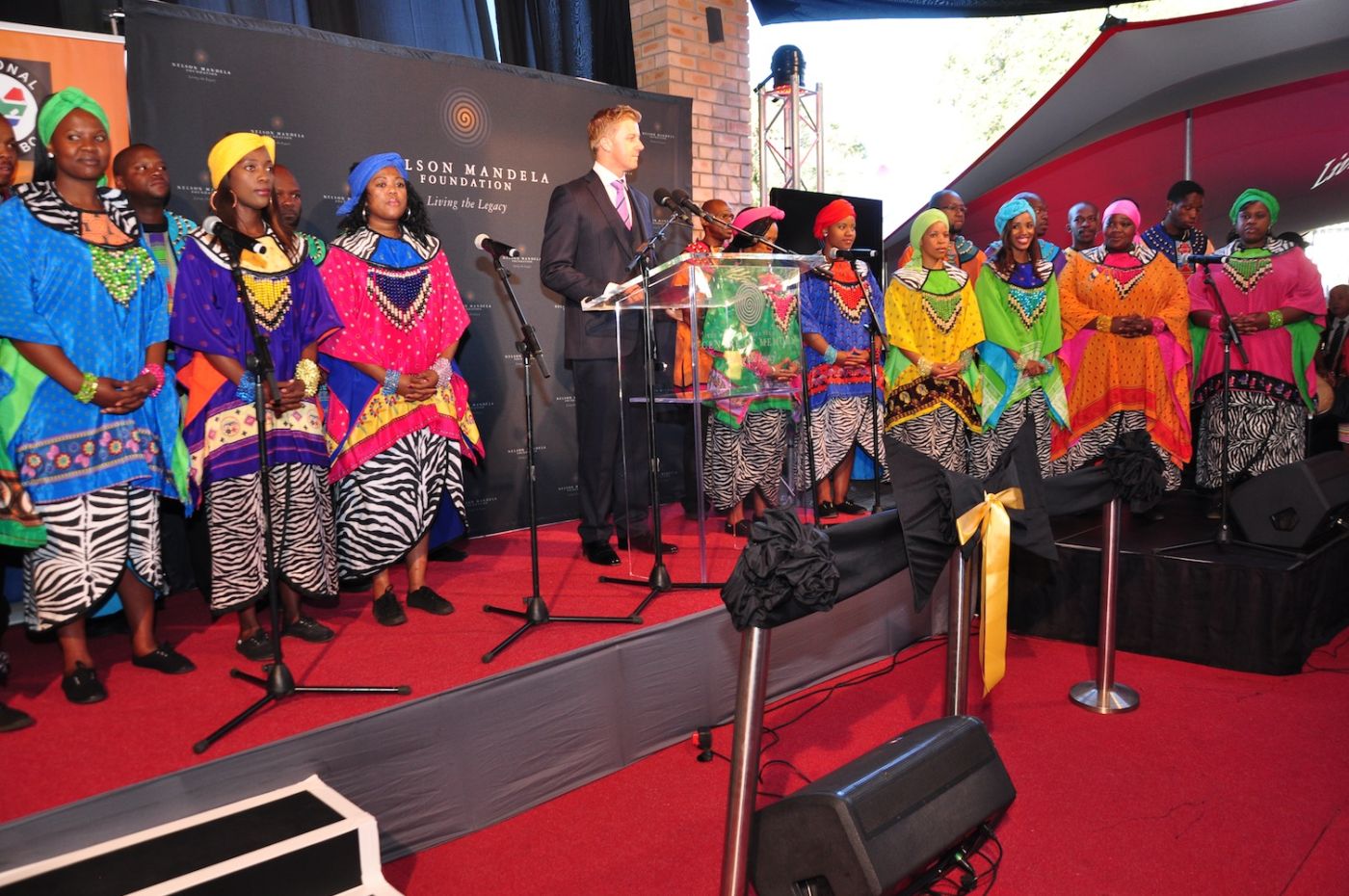 Head of Dramatic Art at Wits School of the Arts, Warren Nebe introduced the panellists