In his keynote speech, Dorfman spoke about the struggle for freedom in Latin America compared to that of South Africa.

He urged delegates to build gardens as Nelson Mandela did in prison, learn to trust one another, look out for one another, keep memory alive and build a better nation for all.

This is what some of the guests had to say after the lecture:

“I was in Chile in 1972, and I thought the speech was wonderful! I loved the garden analogy – gee whiz, that was wonderful!” – Joe Jele, South African ambassador to the United Nations

“It was awe-inspiring and very evocative of our own experience. There was a deep understanding of what South Africa has gone through, and [the lecture] illustrated some of our challenges incredibly well.”– Naledi Pandor, South African minister of Science and Technology

“The lecture was great and inspiring, in the tradition of what we’ve tried to achieve with the annual lecture. I’m going to read it again on the plane!” – Jakes Gerwel, chairperson of the Nelson Mandela Foundation

“There’s so much there that I can take away and unpack and do so much with.” – Loyiso Nongxa, vice-chancellor of the University of the Witwatersrand, Johannesburg

“I think it is really important for Africans and the world to listen to this man. I felt like I was in school today. I am happy to have attended this lecture.” – His Majesty King Tschiffi Zie Jean Gervous of Côte d’Ivoire

“My regret is he should have been here in 1994 – he could have helped shape a better South Africa. We dealt with transformation incorrectly – we need to reconvene as South Africans, open up those wounds and confront them. We need to face up to our pain.” – Hanief Ebrahim, advisor in the South African presidency

“We anticipated he would be both thoughtful and thought-provoking – he has a way of getting to his audience that we’ve seen time and again over the past 10 days. He makes us think about ourselves. It’s refreshing to realise that our problems are not unique and neither do our solutions have to be.” – Achmat Dangor, CEO of the Nelson Mandela Foundation

“This is the kind of lecture that one wants to go back to. It brought together the Latin American dimension of the dictatorship and the apartheid dimension of South Africa. Their pain, in essence, was our pain. Through this lecture we remember the good and mourn the bad, but it has also inspired us to strive to be the best.” – Max Sisulu, speaker of Parliament

“The lecture really brings together minds of different people, both from Africa and the world. It is important for us to be reminded of who Nelson Mandela was in comparison to other leaders. I hope the Foundation continues having these lectures to keep the legacy of Nelson Mandela alive.” – Khosi FP Kutama, National House of Traditional Leaders

“I loved the story of Carlos and the portrait he kept of Allende for over 20 years, and then the one of the woman who lamented Pinochet’s death, which was quite shocking for me. The two contrasting scenarios were powerful.” – Phillip Molekoa, South African Human Rights Commission

“I found it one of the most moving commentaries at a time when our country needs to take stock of where we’ve come from and where we’re going.” – Cheryl Carolus, chairperson of the South African Airways board

“It was a superb synthesis of the principles and personalities of his remarkable, personal struggle. It was a privilege to hear him and to be here this afternoon as I approach my 85th birthday.” - Prof Phillip Tobias, paleoanthropologist and professor emeritus at the University of the Witwatersrand, Johannesburg

“I thought it was great. It was amazing, well thought-out and thought-provoking. I don’t know where they got this man, he just hit the right note; obviously a veteran, and what a fitting birthday present for Mr Mandela.” – Pius Langa, chief justice of the Constitutional Court of South Africa

“I was very moved. I was caught up in the particulars of the stories he told and his experience. His stories were powerful.” – Steven Sack, director of arts, culture and heritage for the City of Johannesburg

“For me, the highlight was the story of the child and the cop [about a policeman who confessed to the Truth and Reconciliation Commission to killing a child’s parent, saying to the grandparent that he would have taken the child into custody had it been orphaned]. There are so many of those stories in this country that are true. I would love to find that child! Collectively, as Unit SA, we haven’t had that tough conversation with ourselves that the cop and the grandmother did.” – Mondli Makhanya, editor-in-chief, Avusa Media

“It was very insightful, humbling and a memory in itself.” – Victoria Maloka, South African Human Rights Commission

“I found it very relevant and very much shared the experience and when we set up our Truth and Reconciliation Commission, the then Minister of Justice looked at what Chile had done. I brought my great-grand-nephew. He is only 11 and he said it was fantastic. I think that is a great skill given the seriousness of the topic.” – Frene Ginwala, former speaker of Parliament

“A moving, profound and constructive experience that helps everyone who hears it and everyone who will read it to know that, starting with memory and moving through empathy, we can reconstruct our country with justice.” – Edwin Cameron, justice of the Constitutional Court of South Africa

“I wasn’t familiar with the subject matter, but it was interesting. I’d like to know more about Chile’s history.” – Miriam Chipimo, UNAids

“Let’s hope our leaders were listening and feel appropriately uncomfortable – especially the thugs and autocrats among them!” – William Bird, director of Media Monitoring Africa

“It was thought-provoking, and now I want to read it!” – Kate Turkington, media personality

“I thought his points about reconciliation were very generous and difficult to conceive of here. I loved what he had to say about memory and connecting the past and the future.” – Helene Perold, education, media and development consultant

“The stories that Ariel told were very touching – especially the one about the policeman and the child. I liked the message that you cannot change the past, but you can definitely do something about the future.” – Lorraine Molepo, South African Human Rights Commission

“I went to the panel discussion last night where it really got me focused on the topic of today. It was much more personal. It is such a privilege; he has the ability to articulate the universal message of reconciliation and forgiveness and memory. For me it is a universal message and we should all stick to it in our lives and in our countries.” – Marianne Fassler, fashion designer

“I haven’t been to one of them but I have been exposed to all of them and by far this is the most appropriate of all of them. It reinforces the fact that there is hope for South Africa. It is just a reminder that it should not be about our own comfort, but what we do as an individual for others. [The lecture] couldn’t be timelier for a country that is going down.” – Dr Kgosi Letlape, chairperson of the South African Medical Association

“The lecture was outstanding. The man is a genius. It is one of the best lectures I have attended, absolutely beautiful.” – Mosie Moola, former member of Umkhonto we Sizwe and treason trialist

“[The address] clearly gave our problems the gravitas they need and it allowed us the distance [to reflect] ... I’ve been totally blown away by the man.” – Kevin Bloom, author

“One of the problems we work with is the immediacy of things and we never give ourselves the time to reflect. Today we were taken on a journey of reflection and it was extraordinarily useful for everyone who sat and listened.” – Helen Rees, head of the Reproductive Health Research Unit

“The idea that we’re essentially compassionate was a very powerful one.” – Nicola Galombik, businesswoman

“He’s a brilliant speaker. I enjoyed his analogies, especially the one about the carpenter [who hid a picture of Chilean socialist leader Salvador Allende in a wall in his house to avoid persecution from the Pinochet regime]. He’s very down to earth.” – Tim Warren, businessman

“I love the way he used stories to connect the narrative, and his message for South Africa about connecting the past with the future was timely.” – Paula Fray, media personality

“As a ’94 baby, I really don’t understand apartheid, but my generation really does have to start to understand it.” – Wynona Latham, learner

“The central issue he raised – about talking to the enemy without apology – is a very interesting idea.” – Indra de Lanerolle, media practitioner

“The lecture was an eye-opener. It is amazing how the documentation of powerful and ordinary people brought us to see the contrasts and similarities of the struggle. It was such a wonderful way of taking our story forward.” – Vuyo Mbuli, television presenter

His Majesty King Tschiffi Zie Jean Gervous of Côte d’Ivoire, with his entourage

The audience in attendance at the Linder Auditorium

Speaker of Parliament Max Sisulu, in the audience 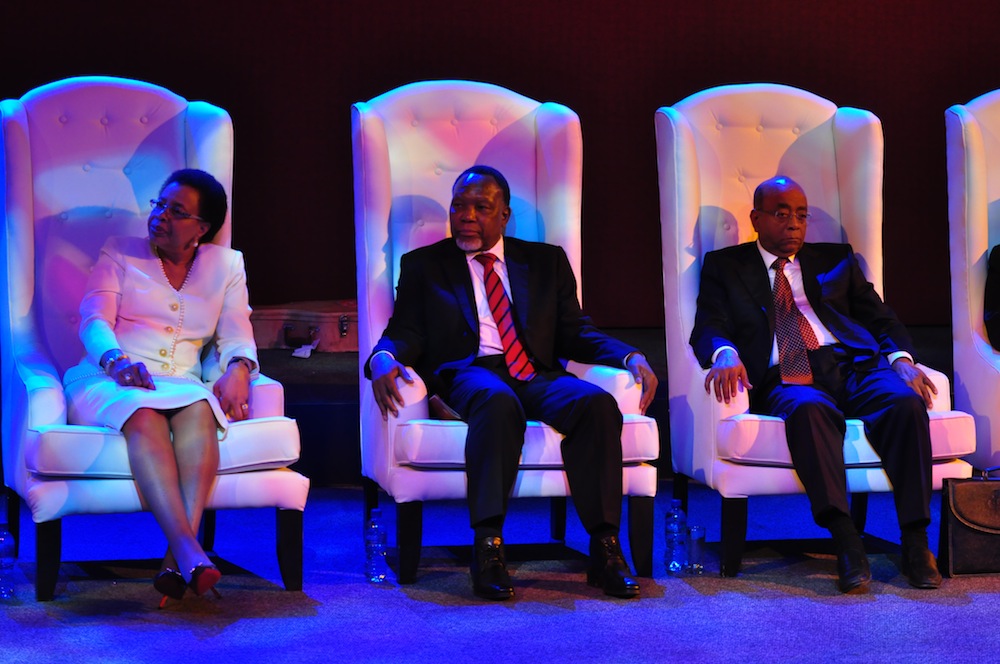 Ariel Dorfman prior to the Annual Lecture 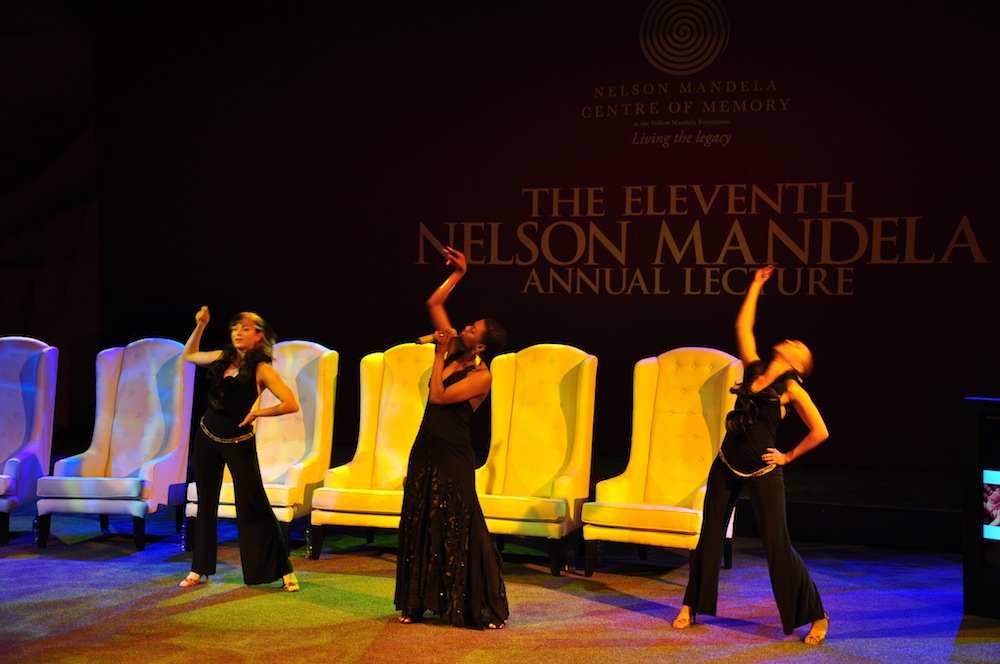 Guests arrive at the Linder Auditorium