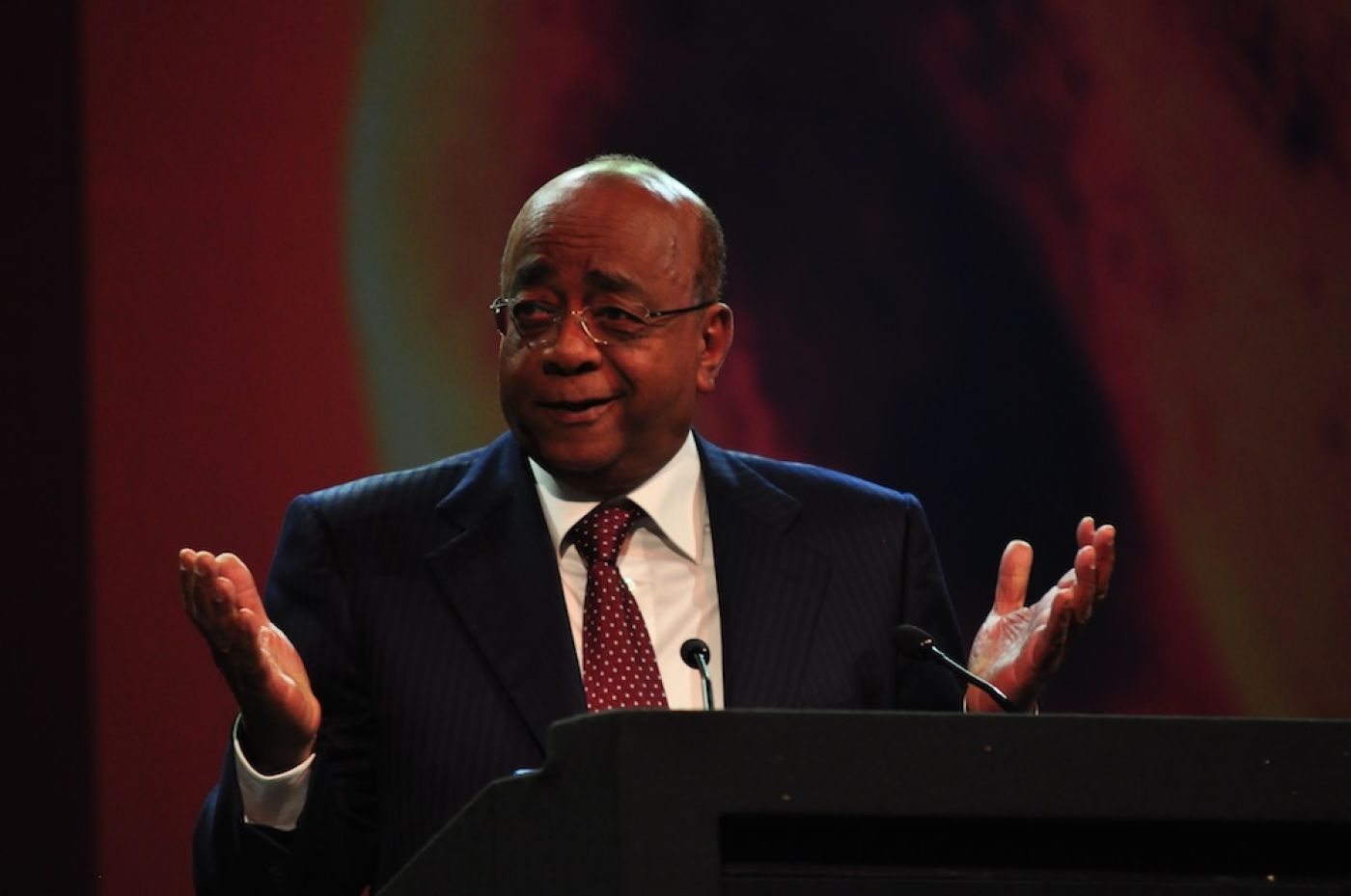 The theme for this year’s lecture was “Building social cohesion” – a call for all South Africans to work towards a united, cohesive, democratic and national society. Dr Ibrahim’s address focused on the need for social cohesion not only in South Africa, but also between the 54 nations that make up the African continent. And there was no mincing of words. The message was clear: Africa expects more from South Africa and is keen to hear us using our strong voice more effectively, sooner rather than later.

The Mo Ibrahim Foundation focuses on monitoring development in Africa. In 2000, South Africa ranked 31st in terms of rural development. In 2012, it ranked 22nd.

“There have been marked improvements,” he said. “It’s not fantastic, though. It tells us a lot still has to be done about the rural areas.”

Guests eagerly await the start of the lecture

Overall South Africa is number five in terms of governance, according to the foundation survey. However, the gap between the rich and the poor is still stark.

“South Africa is the least equitable country in the whole world, and it’s only legitimate for us to ask after 20 years of independence, why is that? It’s a challenge our friends in South Africa need to face up to,” the Sudanese national told guests.

He touched on policy issues, including the subject of land: “You tried the system of willing buyer, willing seller and it didn’t work. Isn’t it time to find a solution within the Constitution to deal with this issue?” he asked.

Another sacred cow, he said, was the matter of black empowerment, aimed at bridging the gap between the rich and the (mostly black) poor. “Did it help?” he asked. “If so, why are we at the bottom of the Gini table?”

The issue of the youth bulge featured strongly in Dr Ibrahim’s address.

“The youth is the largest constituency in Africa,” he said. “Half of Africa’s population is below 19 years old. This can be wonderful news for us, or a major problem. It is the reverse trend of what we are seeing in China, Japan and Europe, where the number of young people is very low. Can Africa dream of being the future factory of the world with China running out of workers? What a prospect for us.” 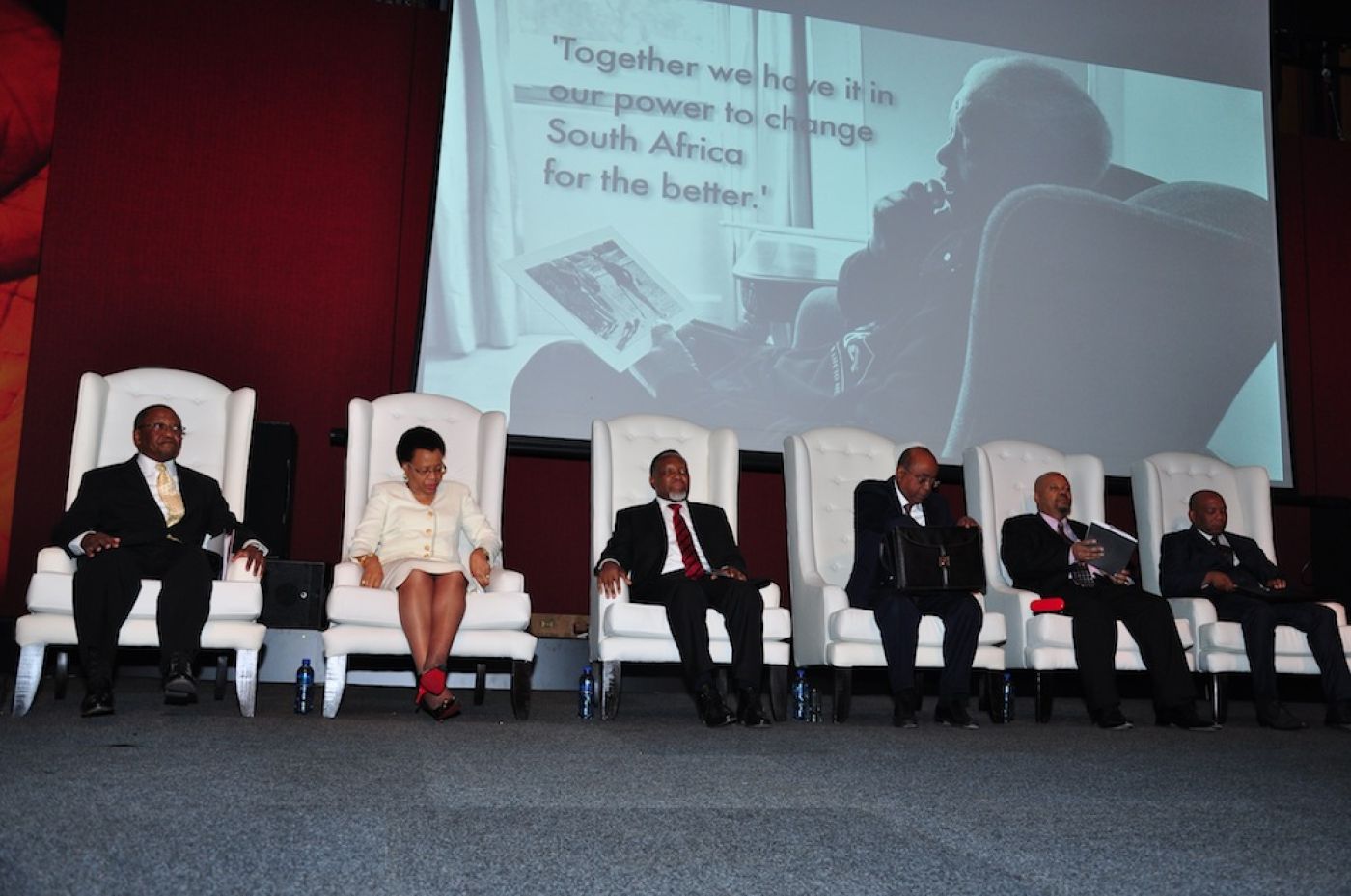 Guests of honour take their seats on the stage

This brought up the topic of education which, along with intra-continental economic integration, Dr Ibrahim believes is a vital prerequisite for us to move forward as a continent.

“What are we preparing (young people) for?” he asked. “Are we producing the kind of people that future jobs will require? I am not sure.”

He cited some statistics to back up this statement: “Two percent of African children are studying agriculture, yet 70% of Africans live off the land. The issue here is matching education to the job market.”

He referred to the millions of young Africans who are about to enter the job market as “a tsunami”.

“Where will the jobs come from?” he asked. “Without jobs, there will be no hope for the youth ... and this is a major problem.”

He called for African leaders to address the issue of education.

“How do they sleep at night?” he asked. “This is the mother of all social cohesion problems that we are about to face. The number of African people aged under 25 years is more than 60%. Who is listening to them? They understand the future better than us. Have we made space for them to join us in making decisions about the future?”

While the average African is less than 25 years old, our leaders are mostly over 60. By contrast, Barack Obama was 47 when he became president of the United States, a country with an economy 15 times the size of Africa’s.

“If Barack Obama’s father had taken him back to Kenya when he was still a boy, where would he be today? He would probably not be the president of Kenya.”

On the need for African integration, Dr Ibrahim cited another statistic: only 11% of trade in Africa takes place between its 54 states. Travelling between countries is hampered by strict controls and visa requirements.

Financial systems are also sub-scale. We have 54 countries with only 14 stock markets, half of which are not even liquid. “Who would want to invest here?” he asked. “If China, which has roughly the same population as Africa, was (made up of) 54 countries, would they be where they are today?”

“We cannot talk about social cohesion without talking about women, the pillar of the African economy. Seventy percent of the population is dependent on the land, and women do agriculture, not men,” he pointed out.

Violent crimes committed against women, he said, represent a serious threat to the African economy.

“One cannot afford to lose this vital production element of society essential for social cohesion,” he said.

He commended the South African government for being one of the most progressive in the world in terms of female representation in leadership, but pointed out that this is not reflected in society. “Cultural issues are difficult to face and it takes everyone in society to address them.”

In conclusion, Dr Ibrahim called on South Africa to live up to its promise and to show the type of leadership that is fitting of the most advanced economy on the continent.

“South Africa really matters to us Africans,” he said. “We look up to you. We look with admiration at the wonderful struggle for freedom, your founding fathers, especially Nelson Mandela, who is an African icon.

“We expect a lot from you, and we will not refrain from being critical if you waver or misbehave.”

In a frank rebuke, Dr Ibrahim said the African community expected more of us.

“You are not doing your job,” he said. “We expect more of you. We expect leadership – we have a serious deficit. South Africa needs to step up and play a better role in Africa.

“Leadership is not about securing a seat on the Security Council or about chairing the African Union – we’re looking for a true engagement to ensure a coherent voice for Africa on climate change, transparency, tax evasion, the illicit transfer of funds. These are issues in Africa where we need your strong voice.

“We are waiting. Don’t keep us waiting for a long time.”

This year’s lecture was held at Unisa in the City of Tshwane. Professor Mandla Makhanya, Unisa Principal and Vice-Chancellor, welcomed guests to the university, which this year celebrates its 140th birthday.

“We believe the lecture is a fitting tribute to the vision and legacy of the father of our nation, Isithwalandwe Nelson Mandela, whose belief and commitment to dialogue as a means of addressing critical social issues is legendary,” he said.

Mr Mandela spent much of his 27 years in prison studying law through Unisa and on 17 May 1989, while he was incarcerated at Victor Verster Prison, he graduated in absentia with an LLB from this institution. Unisa provided an apt platform for this year’s lecture as Africa’s leading distance learning institution, nurturing inspiring leaders of tomorrow.

“Our collaboration with the NMCM on this lecture is also resonant with the vision and practice of our university to provide formidable thought leadership on local, continental and global socio-political and economic issues, as well as an intellectual theatre where robust and critical debate on these matters unfolds.

“Our decision to be a partner in this historic project is a continuation of the long walk we have been taking with this illustrious alumnus of the university in his quest for knowledge and education, culminating in him acquiring three degrees with Unisa,” added Makhanya.

The lecture was formally opened by Professor Njabulo Ndebele, Chairperson of the Nelson Mandela Centre of Memory. Prof Ndebele referred to the Annual Lecture as the Centre’s “flagship engagement platform, where dialogue provides rich opportunities to engage people from all walks of life on significant and often difficult issues of societal concern.”

He said the Centre of Memory was privileged to have hosted several renowned thought leaders and change-makers as part of the 2013 Annual Lecture programme.

“This illustrious panel of speakers has made accessible – to South Africa and to the world – a rare opportunity to experience the diverse insights, experience and valuable life lessons of global icons.”

All speakers agreed that education is a vital component in moving towards social cohesion. As Prof Makhanya put it in his address, “As we cast ourselves to the future we should strive for education that enables excellence, facilitates success and encourages commitment to social cohesion and socio-economic development as some of the most viable options for the development of individuals, their societies and the global world.”