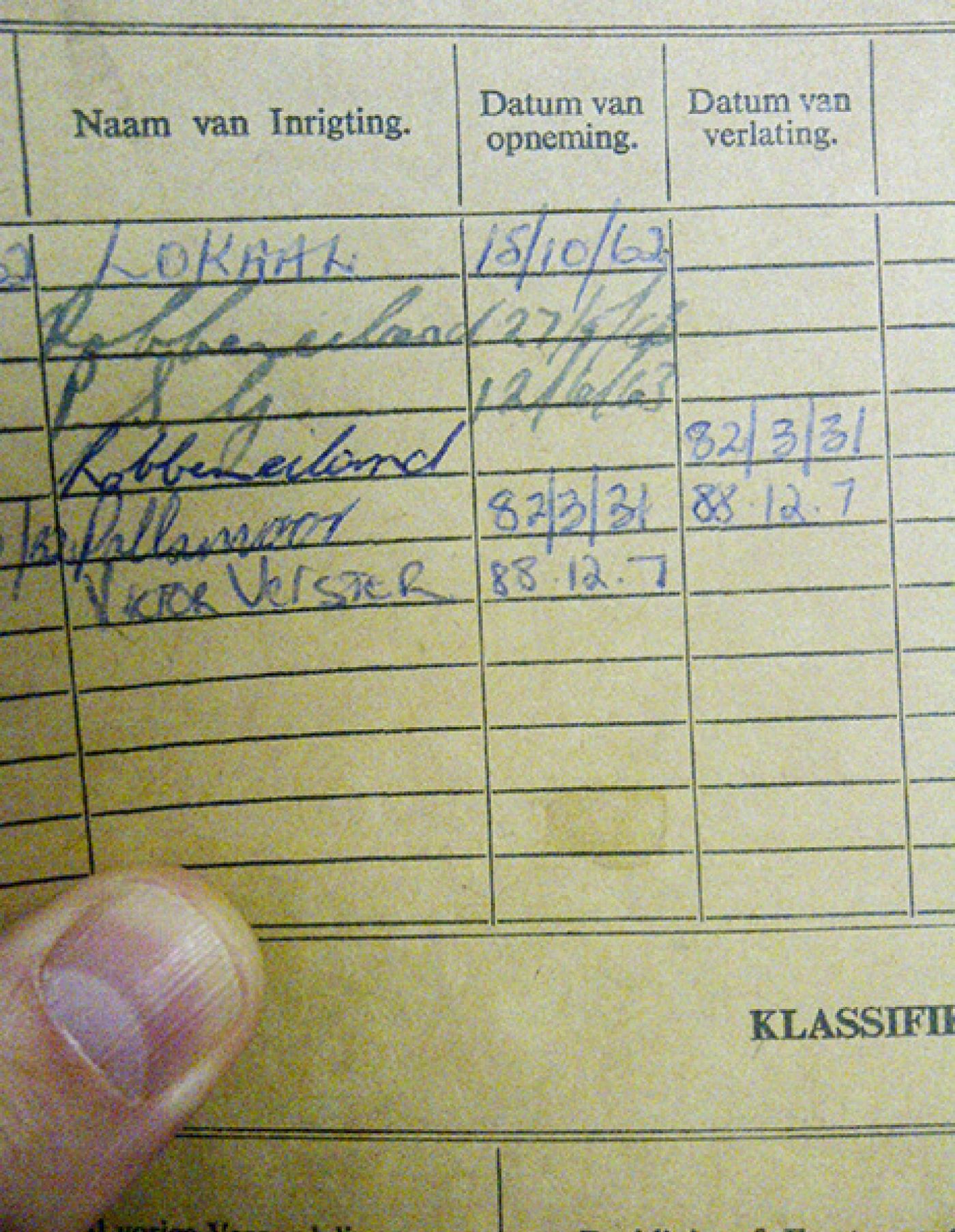 It was 27 May 1963, and just over six months since he had been sentenced to five years in prison for leaving the country without a passport and inciting workers to strike.

Contrary to what some believe, prisoners are not sentenced to a particular prison; they are sentenced by the courts and the prison authorities decide where to send them. In Mr Mandela’s case, he started serving his five-year sentence at Pretoria Local Prison after he was sentenced on 7 November 1962.

Without any warning, on Monday 27 May 1963 he was transferred to the bitterly cold Robben Island, where he faced the harshest of his periods in prison. On the first day the prisoners had to remove every item of clothing and throw them into water, and then dress in the cold, soaked garments.

A couple of years after his release, he related the following story from this part of his imprisonment:

“This Captain says, ‘Now why is your hair long?’ to one of us. Now he chose a chap, you know, who was very gentle, a gentleman, you know, didn't want to quarrel with anybody, wouldn't hurt a fly and he was finding it difficult to answer. So this Captain says, ‘I’m talking to you! You know the regulations! Your hair should have been cut off!’ … So I say to him, ‘Now look here.’ Oh, it was enough! I couldn’t continue with the sentence. He says, ‘never talk to me like that!’ and he was now advancing. So I say, ‘You dare touch me ... by the time I'm finished with you, you will be as poor as a church mouse.’ Well, he stopped ... I was frightened; it was not because I was courageous, but one had to put up a front and so he stopped.” 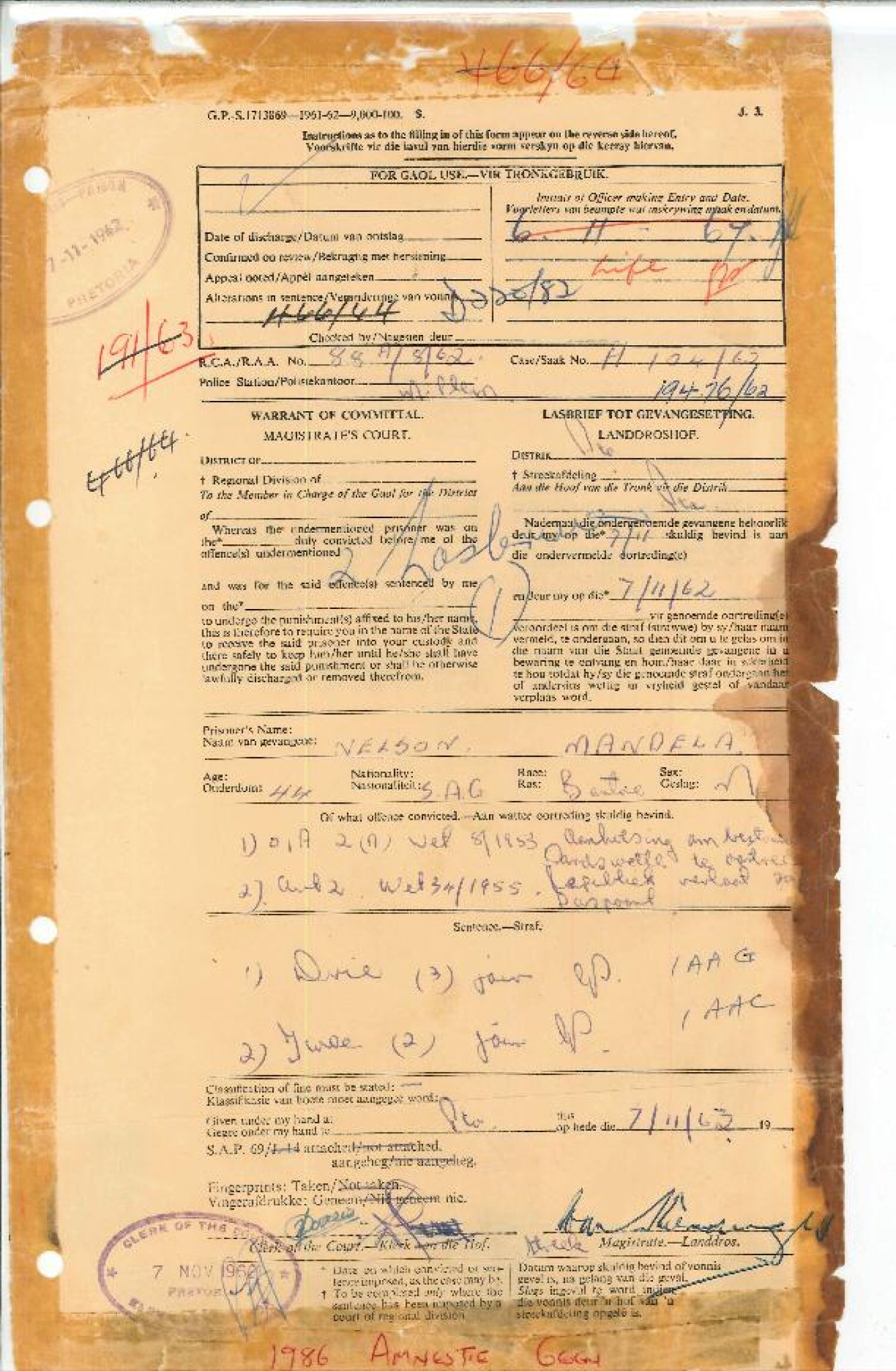 A warrant of committal issued on November 7 1962, by the Supreme Court of South Africa

On 12 June 1963, two weeks after his arrival on the Island, and again without notice, Mr Mandela was transferred back to Pretoria. At the time it was suggested that it was to “protect” him from members of the PAC, an assertion he disputes.

“They issued a statement to the effect that they moved me from Robben Island because the PAC wanted to assault me, which was absolutely untrue … these were youngsters in their 20s … very respectful and they wanted a lot of information from me. And after work I spent a lot of time conversing with them ... Then, when I subsequently went back, after the Rivonia Trial, a Colonel said to me, ‘We had to rush you back to Pretoria because we discovered we had made a mistake. We had transferred you without proper authority to Robben Island.’”

It has been assumed that the Rivonia Trial was the reason for his transfer back to Pretoria, but he was moved almost a month before the 11 July 1963 raid on Liliesleaf farm in Rivonia, in which a number of his comrades were captured.

In October he met them for the first time as they emerged from 90-day detention, and they first appeared in court on 9 October 1963.

On 12 June 1964, the day after having been convicted of sabotage, Mr Mandela and seven others were sentenced to life imprisonment. On 13 June – almost a year to the day since he had left the Island – he, Govan Mbeki, Walter Sisulu, Raymond Mhlaba, Ahmed Kathrada, Elias Motsoaledi and Andrew Mlangeni arrived on Robben Island. Denis Goldberg, because he was white, was sent to Pretoria.