Nelson Mandela was arrested on several occasions and stood trial four times. He spent over 27 years in prison. Our archivists and researchers have assembled dates and locations of transfers and time spent in confinement.

Nelson Mandela is charged, with 19 others, including Walter Sisulu, for violating the Suppression of Communism Act. They are convicted and sentenced to nine months' hard labour, suspended for two years.

Sixty-nine peaceful protesters are killed by police at Sharpeville. On 30 March Mandela is one of thousands detained under a state of emergency.

After a four-and-a-half-year trial, where he and scores of other people were charged with high treason, Mandela and the last 27 remaining accused are acquitted. He goes underground.

Mandela leaves the country for military training, and to gather support for the newly formed armed wing of the ANC, Umkhonto we Sizwe (Spear of the Nation). 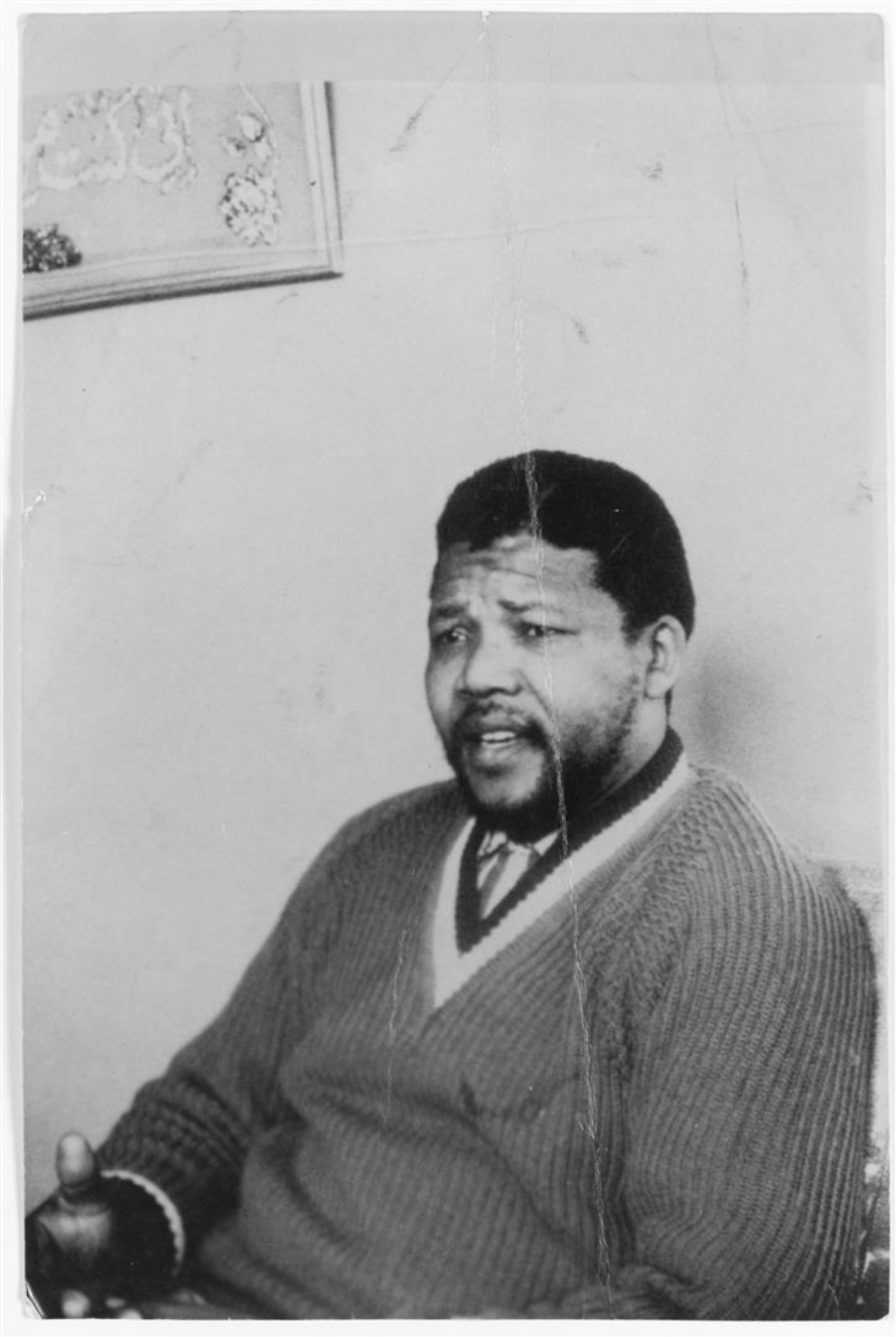 Nelson Mandela was known as the Black Pimpernel when he went underground in 1961.

He is arrested at a roadblock near Howick, KwaZulu-Natal.

He is sentenced to five years in prison, for incitement and leaving the country illegally. He begins serving his sentence at Pretoria Local Prison and is assigned the prisoner number 19476/62.

Appears, for the first time, with 10 others in the Palace of Justice in Pretoria. They become the accused in the Rivonia Trial. The case is remanded to 29 October. 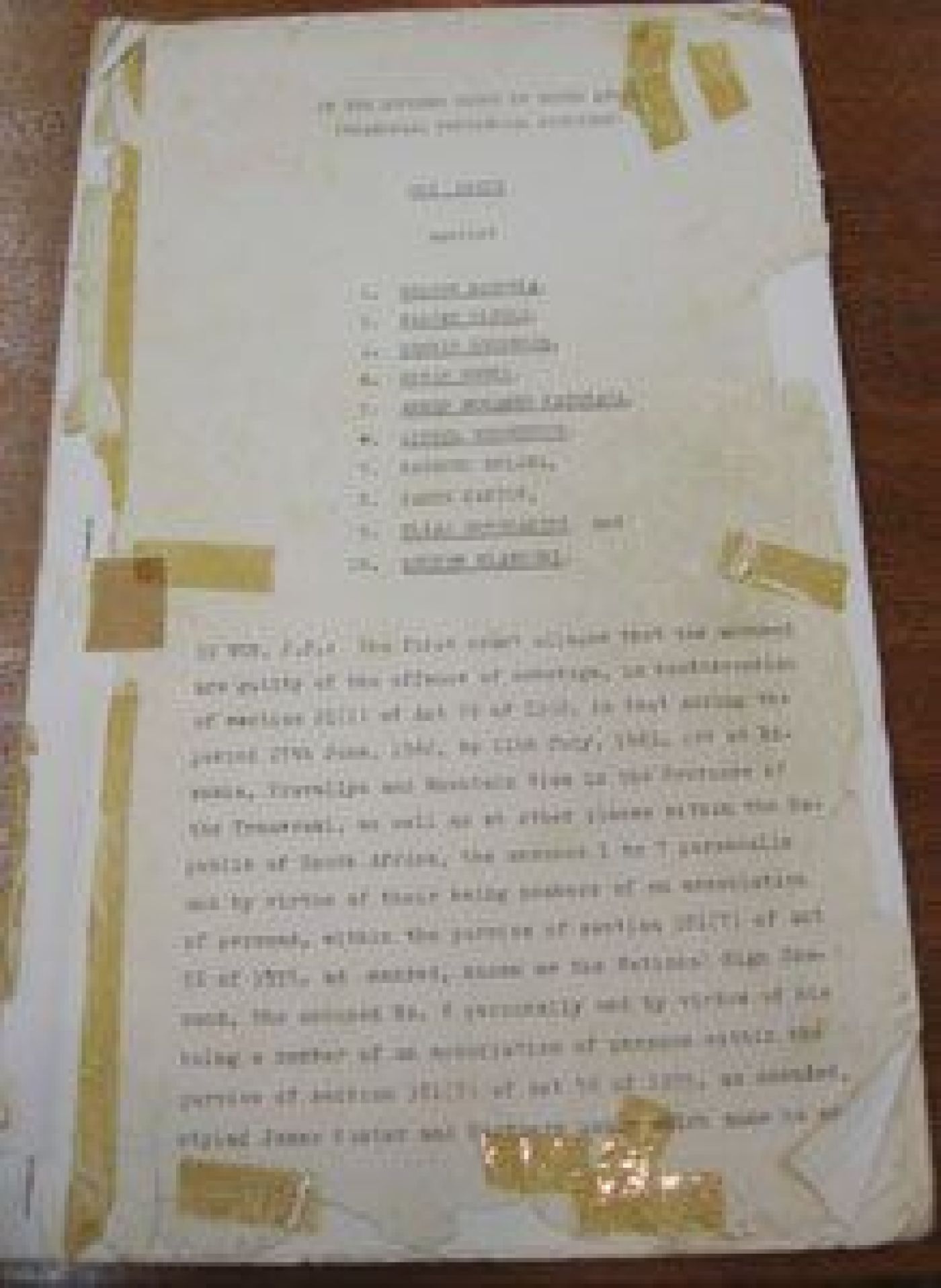 A document from the Rivonia Trial that forms part of Ahmed Kathrada’s archival materials at the Robben Island Museum Mayibuye Archives.

The defence applies for the quashing of the indictment, which alleges 199 acts of sabotage.

Prosecutor Percy Yutar announces that Bob Hepple is to become a state witness. He is released and skips the country. The indictment against the 10 others is quashed. They are immediately rearrested.

Justice Quartus de Wet refuses bail to Kantor and Bernstein. The case is remanded to 12 November.

Yutar presents a new indictment splitting the sabotage charges into two parts. The case is remanded to 25 November.

The 199 alleged acts of sabotage are reduced to 193. The defence applies to have the new indictment quashed.

Justice De Wet dismisses the application to have the indictment quashed.

The trial is remanded to 3 December, after Kantor’s new defence requests time to prepare.

“ Real leaders must be ready to sacrifice all for the freedom of their people. ”

The 10 accused plead not guilty to sabotage in the Rivonia Trial.

Kantor is discharged and released.

Mandela makes his famous "Speech from the Dock", in which he says he is "prepared to die" for a democratic South Africa.

All, except Bernstein, are convicted of sabotage.

Mandela and seven others are sentenced to life imprisonment.

All except Goldberg are sent to Robben Island to serve their sentences. Goldberg, as the only white person convicted in the trial, is held in Pretoria Central Prison. Mandela is assigned the prisoner number 466/64.

Mandela’s mother, Nosekeni dies. He is forbidden from attending her funeral.

Mandela’s eldest son, Thembekile, is killed in a car accident. Mandela is forbidden from attending his son's funeral.

Mandela, Sisulu, Mhlaba and Mlangeni, and later Kathrada, are transferred to Pollsmoor Prison. Mandela is assigned the prisoner number 220/82.

Rejects President PW Botha's offers to release him and other political prisoners if they renounce violence.

Goldberg, who has been held apart from his comrades for more than 20 years, accepts the offer and is released.

Mandela admitted to the Volks Hospital in Cape Town for prostate surgery.

Is discharged from the Volks Hospital and held in a cell alone at Pollsmoor Prison, from where he begins communicating with the government about eventual talks with the ANC.

Meets with an Eminent Persons Group from the Commonwealth Group of Nations.

Holds his first meeting with Justice Minister Kobie Coetsee about talks between the government and the ANC.

Mandela admitted to Tygerberg Hospital, where he is diagnosed with tuberculosis.

Transferred to Constantiaberg Mediclinic to continue his treatment.

Is transferred to Victor Verster Prison near Paarl, where he is held in the house formerly occupied by a warder. Mandela is assigned the prisoner number 1335/88. 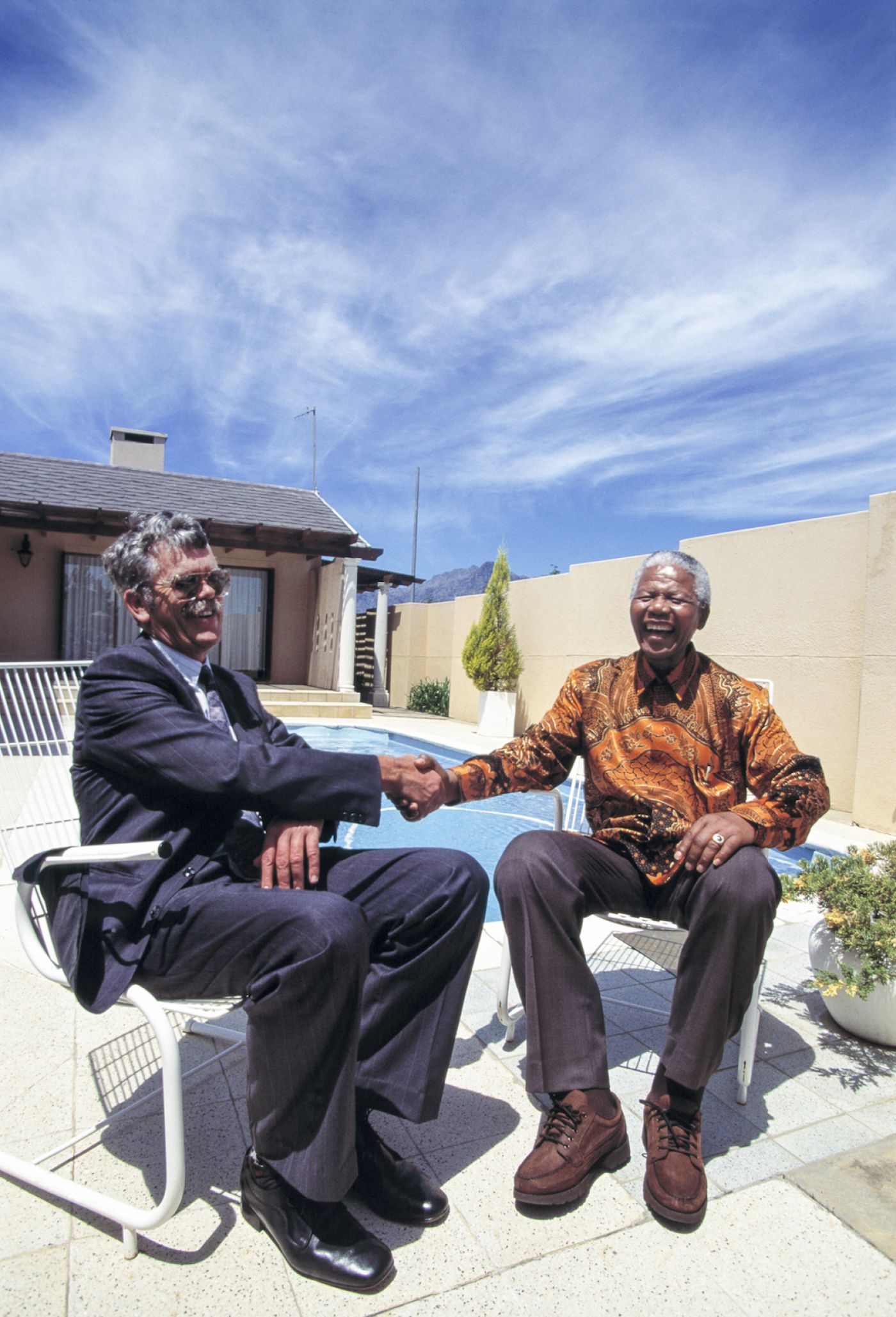 Nelson Mandela meets one of his warders at the cottage at Victor Verster Prison where he stayed until his release in 1990.

Meets PW Botha in his office in Cape Town.

At the opening of Parliament, De Klerk announces the unbanning of all political organisations, including the ANC.

Meets De Klerk, who says he will be released the next day in Johannesburg. Mandela objects, saying he wants to walk through the gates of Victor Verster Prison, and asks for two weeks for the ANC to prepare. De Klerk refuses the extension but agrees to release him from Victor Verster.

De Klerk announces at a press conference that Mandela will be released the next day.

He addresses thousands of well-wishers gathered on the Grand Parade, from the balcony of the City Hall, in Cape Town. Spends the night at Bishopscourt, the official residence of the Anglican Archbishop of Cape Town.

Holds a press conference in the garden of Bishopscourt. Flies to Johannesburg.

Spends the night in North Riding, at the home of a supporter, Sally Rowney.

Flies to FNB Stadium in Soweto for a welcome home rally.

Spends his first night in decades at his family home, 8115 Orlando West, Soweto.