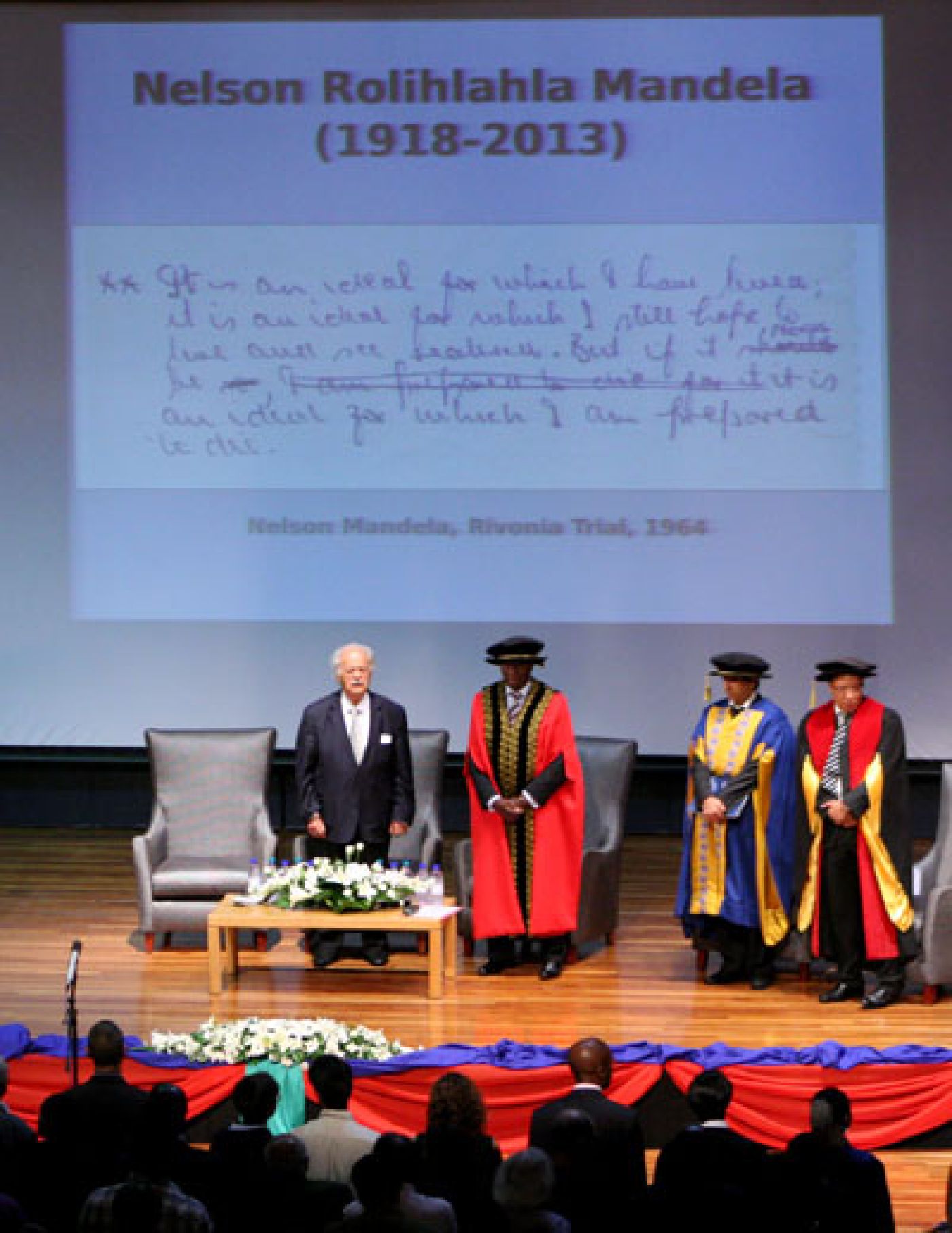 Wits University will honour and preserve the legacy of Nelson Rolihlahla Mandela by erecting a wall of remembrance in his name and in the names of those who fought in the struggle with him.

This was announced by the Vice-Chancellor and Principal of Wits, Professor Adam Habib, last night during a memorial service in honour of the great icon and Wits alumnus.

“Madiba was Wits’ most renowned student, our greatest asset. It was at Wits that he met Ismail Meer, JN Singh, Joe Slovo, Ruth First, George Bizos and Bram Fischer. At Wits he met the very people who stood by his side and defended him during the Rivonia trial,” said Habib.

The Vice-Chancellor said he would table a resolution to the Wits Council in the new year to erect a wall of remembrance for Madiba and his comrades, as a visible sign of Wits’ pledge and commitment to making education the most powerful tool in transforming the campus, the country and the world.

The memorial service was graced by renowned struggle veterans and long-standing friends of Mandela, Dr Ahmed Kathrada and Advocate George Bizos, in conversation with Deputy Chief Justice Dikgang Moseneke. The three men regaled the audience with stories about how they met Mandela, as well as their time together during the Rivonia trial and their subsequent jail sentence.

Personal tales and anecdotes abounded, and Kathrada and Bizos had the audience hanging on their every word as they spoke about what a great man Mandela had been, not just as a fellow freedom fighter, but also as a friend and comrade.

“The world has united in his illness and upon his death. He was a great man, but he always emphasised that he was part of a collective. He always said he did not make policy, but that the collective made policy. I will be very disappointed to see the policies that he helped to form, be changed,” said Kathrada.

Bizos spoke with great emotion about the man he called one of his best friends, and said Mandela had saved South Africa from war when he was released after 27 years of incarceration.

“Mandela saved South Africa from a bloody civil war because he believed that fanatics were responsible for civil wars. He was not a fanatic, he was a conciliator. For him, South Africa was not a one-man state,” said Bizos.

The memorial service was attended by more than a thousand mourners who came to pay tribute to Madiba. Other speakers included Johannesburg Mayor Parks Tau; President of the Wits Convocation, Professor Mamokgethi Phakeng; and President of the Wits Student Representative Council, Shafee Verachia, who received a standing ovation after his moving tribute.

Award-winning South African songstress Lira performed “Something So Strong Inside”, one of Madiba’s favourite songs, while the Wits School of Music and the Wits Choir, in their usual colourful and poignant fashion, also entertained the guests.