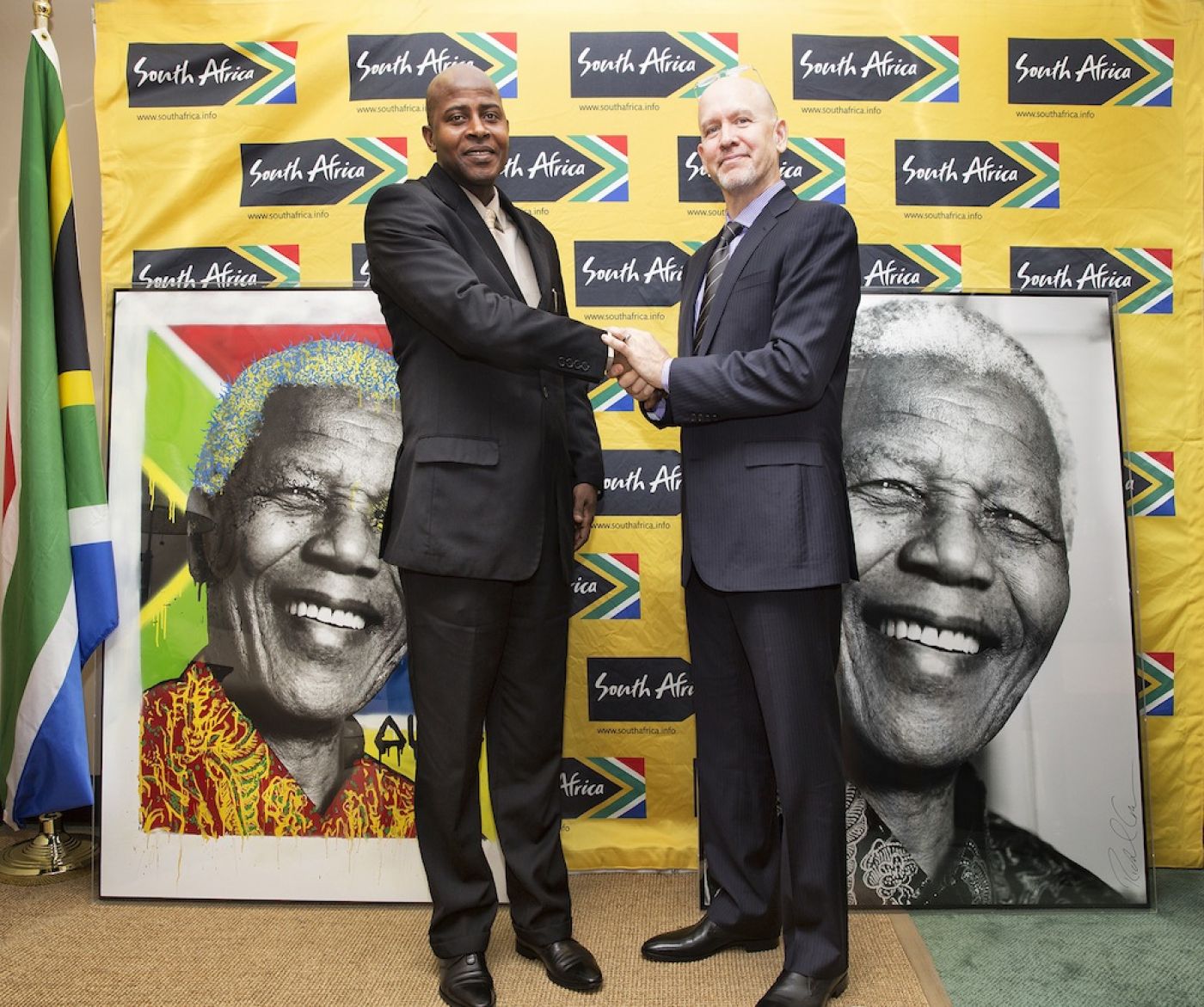 On 16 October, the Honourable Consul General George Monyemangene accepted a one-of-a-kind rendering of Nelson Mandela on behalf of the Nelson Mandela Foundation at the South Africa Consulate in New York City. The stunning image is the result of an innovative collaboration between world-renowned photographer Richard Corman and Alec Monopoly, one of the hottest young artists in the world.

In 2001, Corman was in Cape Town as the official photographer for the Special Olympics. While there, he was asked to photograph a visit of significance to Robben Island by Nelson Mandela and senior members of the Special Olympics. This was one of the first times President Mandela had returned to Robben Island after 18 years of imprisonment there. Corman took a distinguished black-and-white photograph of President Mandela visiting his old cell.

Corman has remained inspired by President Mandela’s greatness and humility, and recently arranged for his collaborative partner, Alec Monopoly, to create a unique painting using the original photograph of President Mandela. 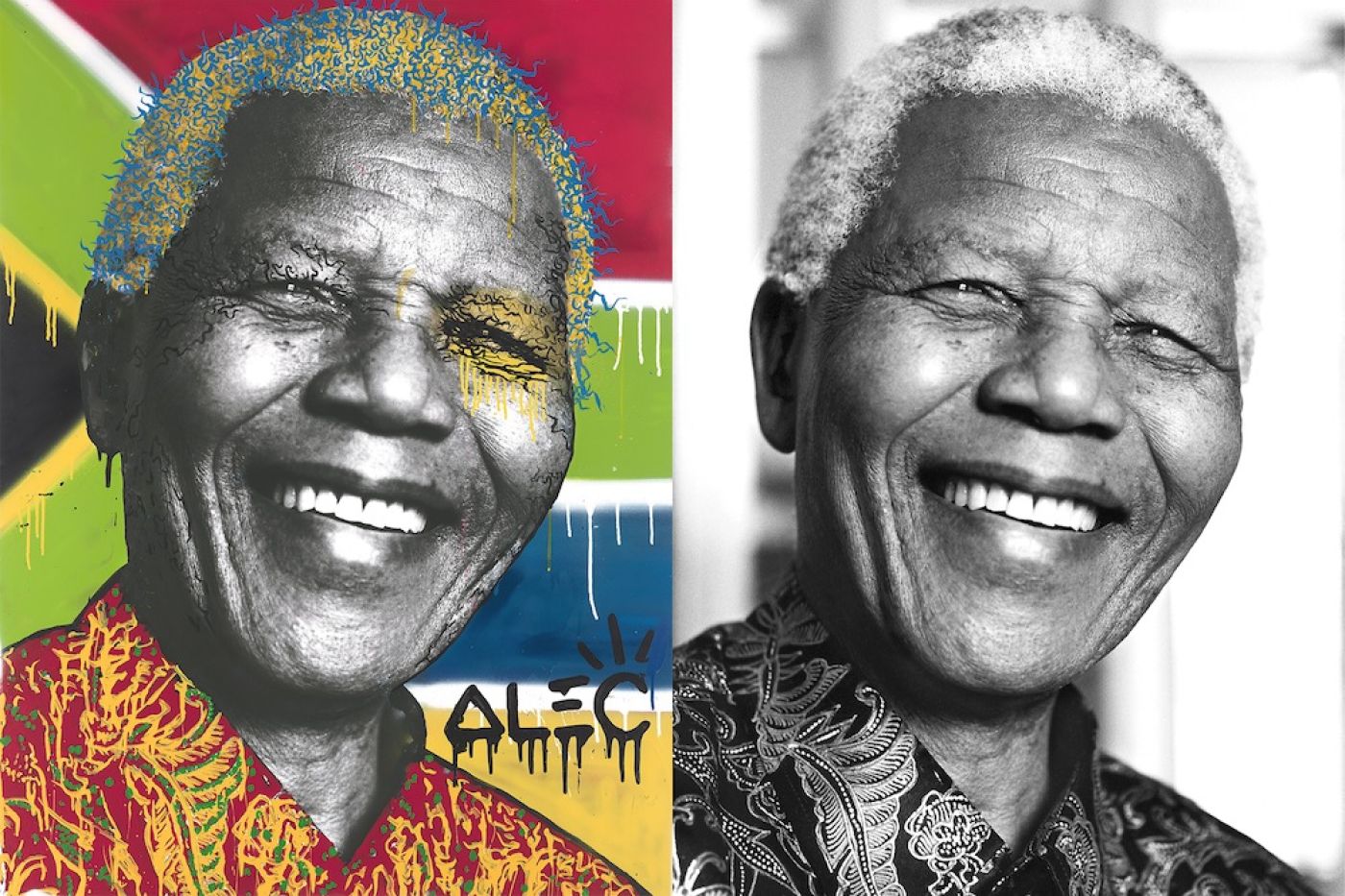 The striking piece, depicted here next to the original photograph, integrates the vibrant colours of the South African flag throughout the black-and-white photo in Alec Monopoly’s creative street art style.

The striking piece integrates the vibrant colours of the South African flag throughout the black-and-white photo in Monopoly’s creative street-art style.

“We are delighted to accept this wonderful painting of President Mandela on behalf of the Nelson Mandela Foundation Centre of Memory,” said George Monyemangene, Consul General of the South African Consulate.

“I’ve had the opportunity to work with an amazing breadth of people throughout my career, but that extraordinary day on Robben Island with Nelson Mandela will always be the most special to me,” said Richard Corman.

“It’s an honour to collaborate with Alec Monopoly to bring this photograph to a new level and convey the pure joy and vibrancy that surrounds Nelson Mandela.”

Richard Corman has been capturing poignant moments of human triumph for over three decades. Humbling experiences with non-profit organisations are widely reflected in Corman’s photographs. Most notable is heartfelt work with the Special Olympics as he has been photographing these inspiring athletes for 20 years. As a portrait photographer, Corman has worked with a remarkable range of subjects including Nobel Peace Prize recipients Nelson Mandela and Elie Wiesel, esteemed actors Robert De Niro, Tilda Swinton and Daniel Craig, and artists before they reached stardom, such as Madonna and Keith Haring. He’s also worked with elite athletes who inspire greatness such as Muhammad Ali and Michael Jordan, and with writers/artists who have left an indelible mark, including Kurt Vonnegut and Basquiat.

Alec Monopoly is a renowned painter and street artist. He is in high demand, recently creating original artwork for CoverGirl, Rolex, The American Cancer Society and the W Hotels, as well as superstar recording artists including Avicii, Steve Angello, Nervo, Afrojack and 2 Chainz. He has partnered with Richard Corman on various projects, which have been displayed around the world.