South African flags fluttered on Saturday 4 August 2018 as well-wishers waved goodbye to a group of climbers who aim to reach the summit of Africa’s highest mountain in honour of Nelson Mandela, and to mark his centenary year.

Trek4Mandela is an annual climb of Mount Kilimanjaro that raises funds for the Ibumba Foundation’s Caring4Girls programme, to provide support and sanitary products for to African girls who cannot afford them. 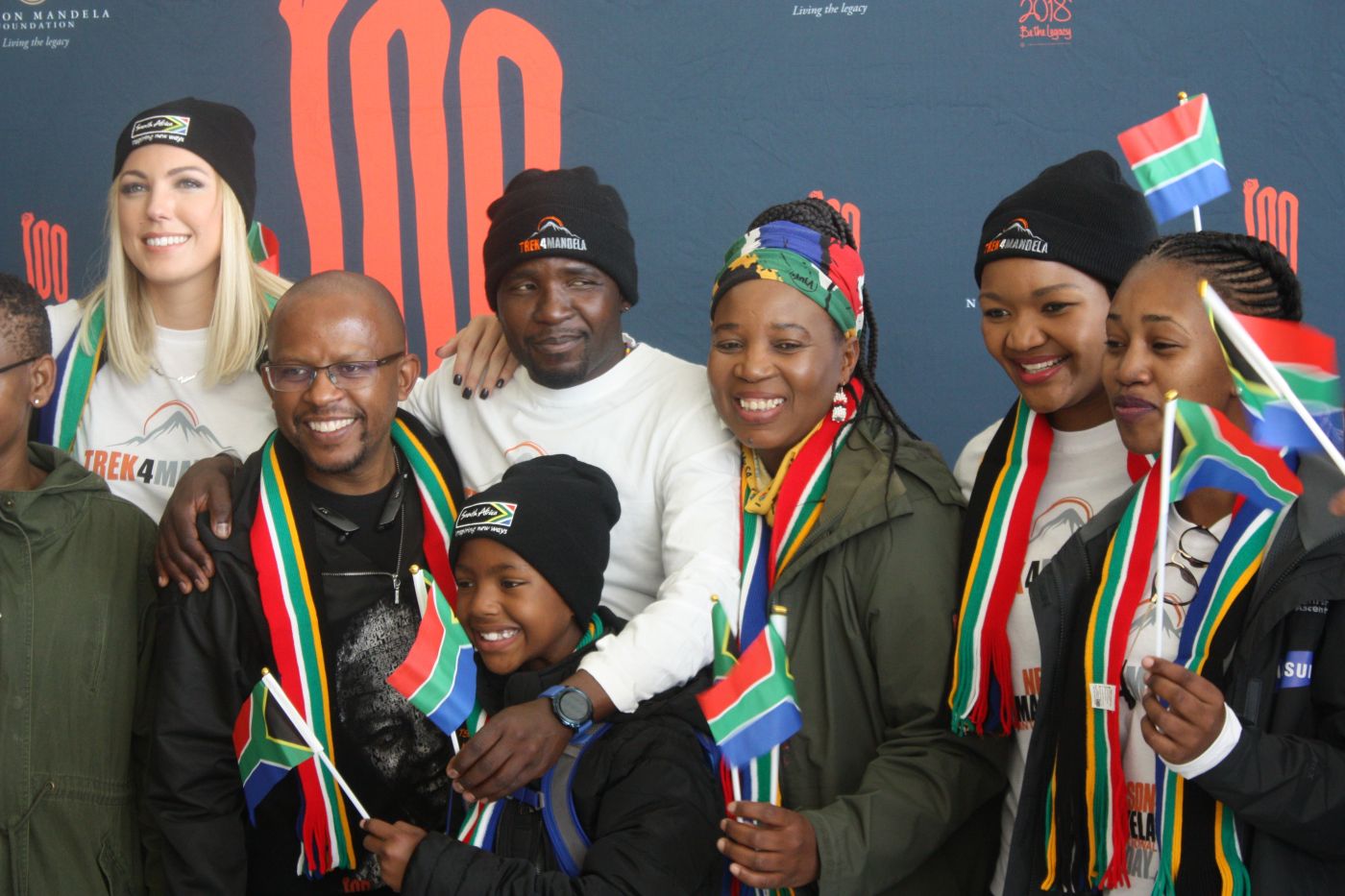 The annual treks were a reminder that across Africa and the world many people face gruelling ordeals, said Hatang. He has summited Kilimanjaro before and said he expects the climb to be “gruelling”.

“Trek4Mandela reminds us that we can’t build the country of Mandela’s dreams without discomfort,” said Hatang.

In this year that marks the centenary of Mandela’s 1918 birth, Trek4Mandela is aiming to see a record number of climbers reach the top of Kilimanjaro. Hatang and his 10-year-old son, Tshego, are among them.

Research shows girls from poor backgrounds could miss up to 50 days of school each year due to menstruation-related challenges. According to the United Nations Children’s Fund, girls’ education and empowerment saves millions of lives – better educated women tend to be healthier, work and earn higher income, have fewer children, and provide better healthcare and education to their children.

Trek4Mandela was founded in 2012 by South African mountaineer Sibusiso Vilane and his friend, Richard Mabaso, CEO of the Ibumba Foundation. In 2003 Vilane became the first black person in the world to reach the summit of Mount Everest, the highest mountain in the world. He now leads the Trek4Mandela climbs, and this attempt is his 24th ascent of the mountain.

“I am very disappointed that in this era of technology and innovation there are still girls who miss school due to menstruation. I am very excited to be part of this programme,” Vilane said.

“When I first heard about Caring4Girls in 2014 I struggled to comprehend how there could still be girls in South Africa and Africa who missed school because of their period,” said eNCA News Night anchor Cathy Mohlahlana. “It should be a warning bell for all of us. It points to the level of inequality we still face, and to how we as a society need to pull together,” she said.

Mohlahlana, who left with Hatang’s team, is making her first attempt at reaching the top of Kilimanjaro. “My mind is as prepared as it can be,” she said, “but I hear nothing can ever quite prepare you for it.” 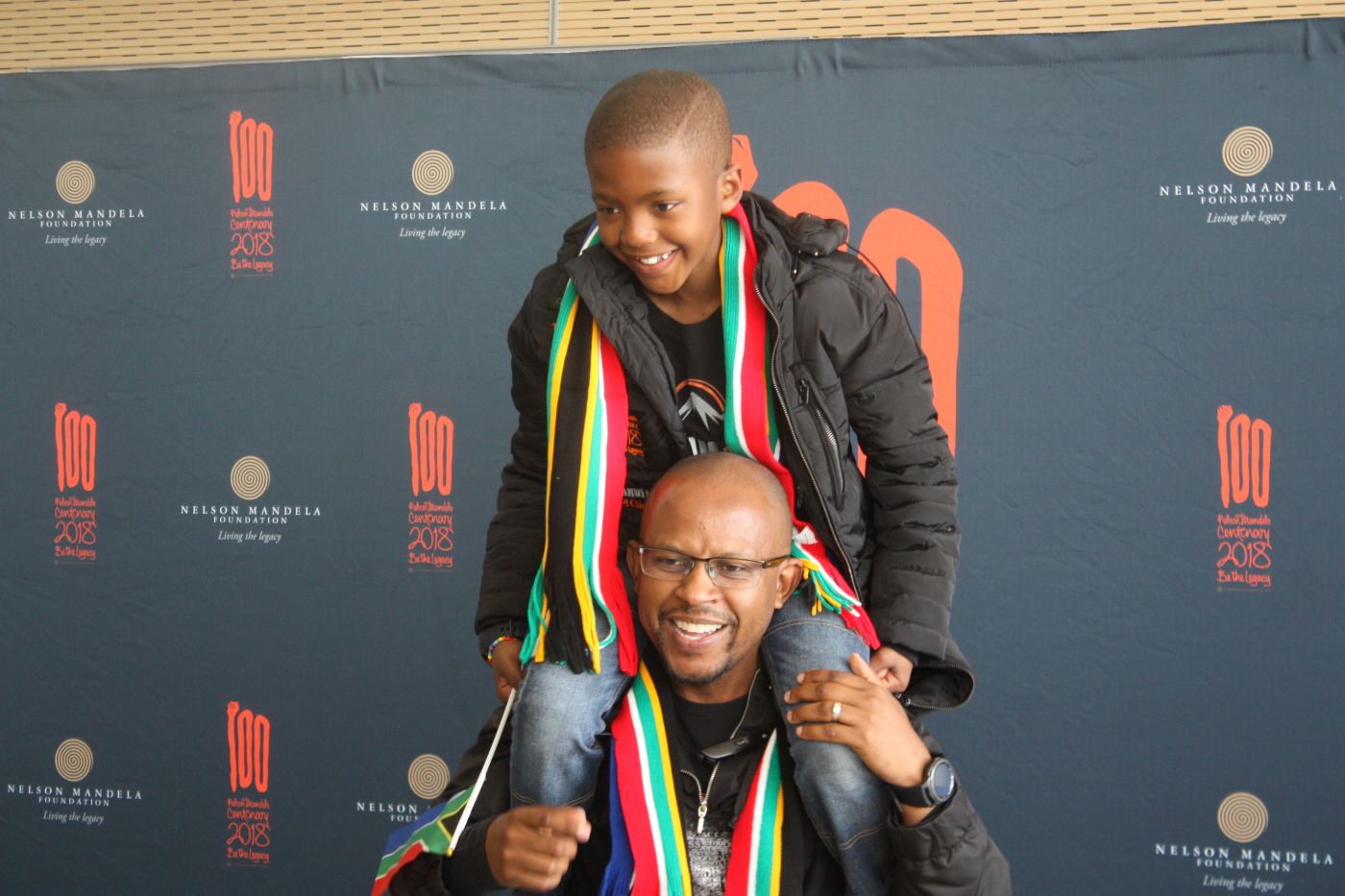 Tshego Hatang is also making his first attempt at reaching the top of Kilimanjaro. “It’s to help girls, and because of my mom and dad,” he said, waving a South African flag and sporting a child-sized down jacket.

While Tshego was hugged by his cousins, Mrs South Africa 2018, Nicole Capper, knelt to give her children, Joshua and Tatum, final cuddles.

“I am excited to summit Kilimanjaro on Women’s Day,” said Capper. “It represents the battles and climbs that women survive every day.” 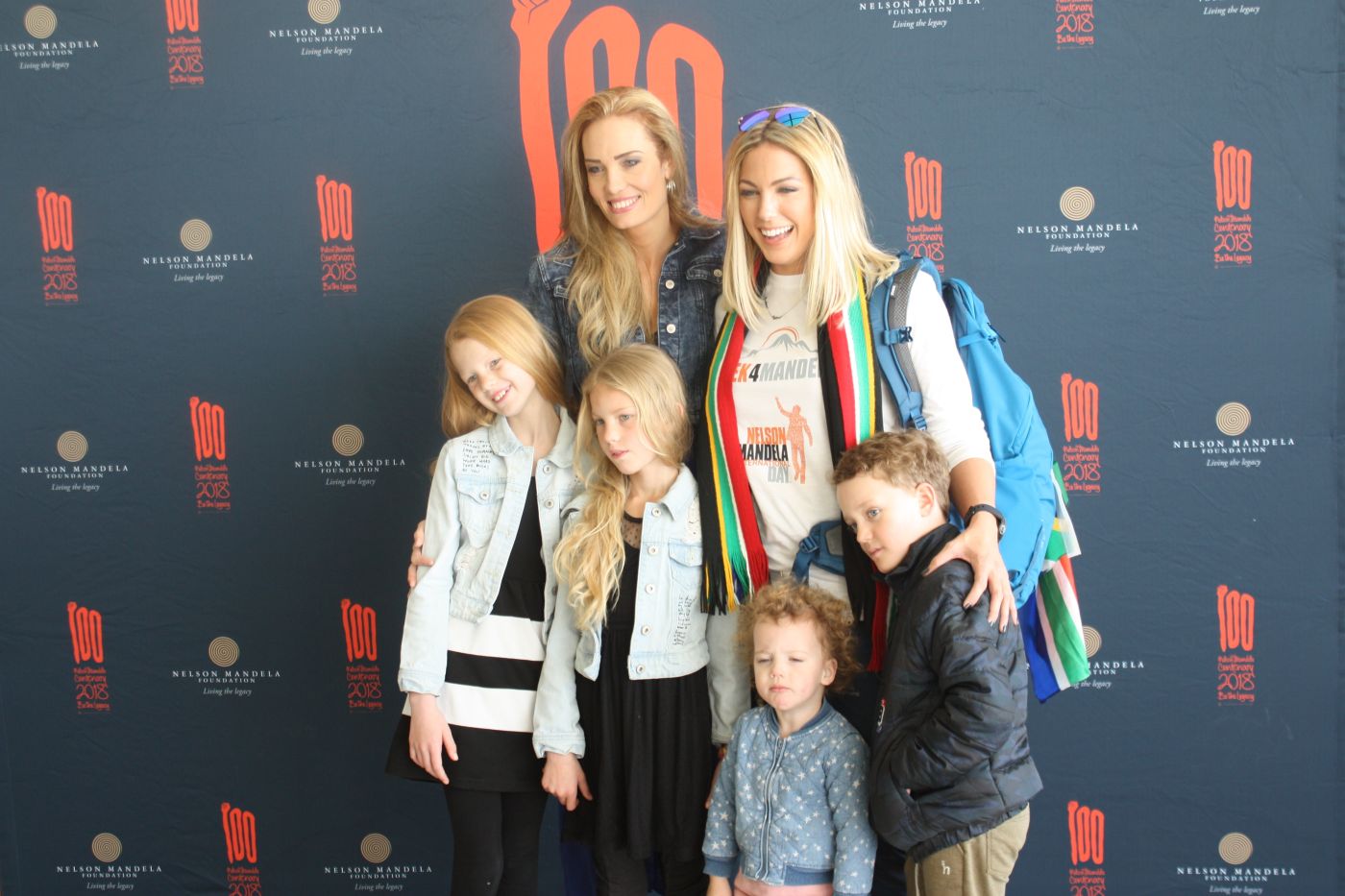 Samsung Africa CEO Sung Yoon, whose son Jason Yoon is one of the Kilimanjaro climbers, said he had not realised the depth of impact Mandela had had on South Africa and the world until he was taken on a tour of Robben Island by businessman and politician Tokyo Sexwale.

Yoon has recently taken up the position as head of Samsung in Africa. After the Robben Island tour, Yoon decided Samsung should be a Trek4Mandela sponsor. 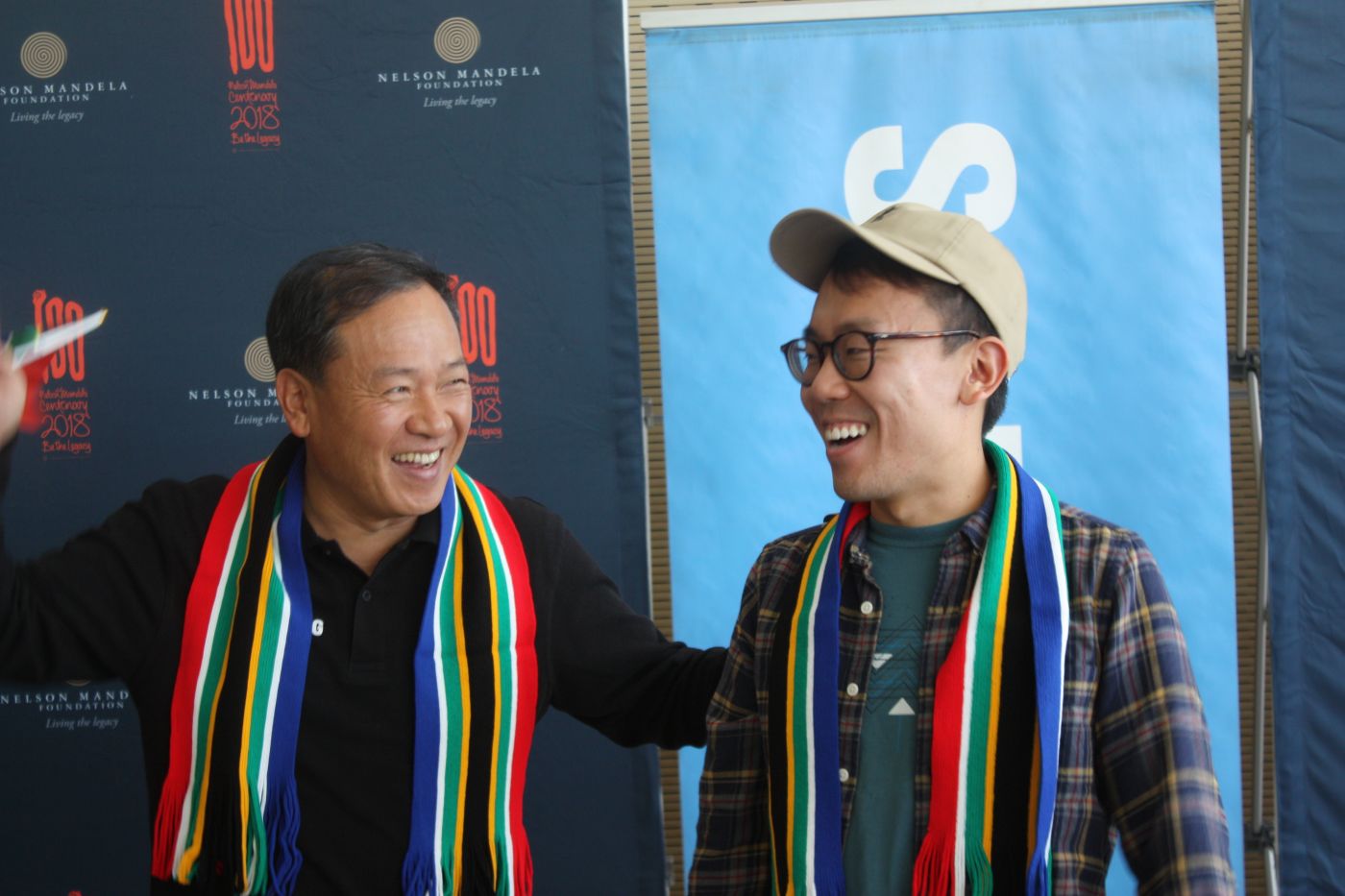 Samsung Africa CEO Sung Yoon and his son, Jason Yoon, who is participating in this year's Trek4Mandela.

Mabaso said since 2012 he and Vilane have used the Trek4Mandela programme to honour Mandela and the Nelson Mandela Foundation’s call to “make every day a Mandela Day”. Nelson Mandela International Day is a United Nations-declared annual event aimed at encouraging people to participate in activities that make the world a better place.

“It’s a new experience every time. Most people have tears at the top,” said Mabaso. “It’s very special ... Kilimanjaro is a pilgrimage everyone should make at least once in their life.” 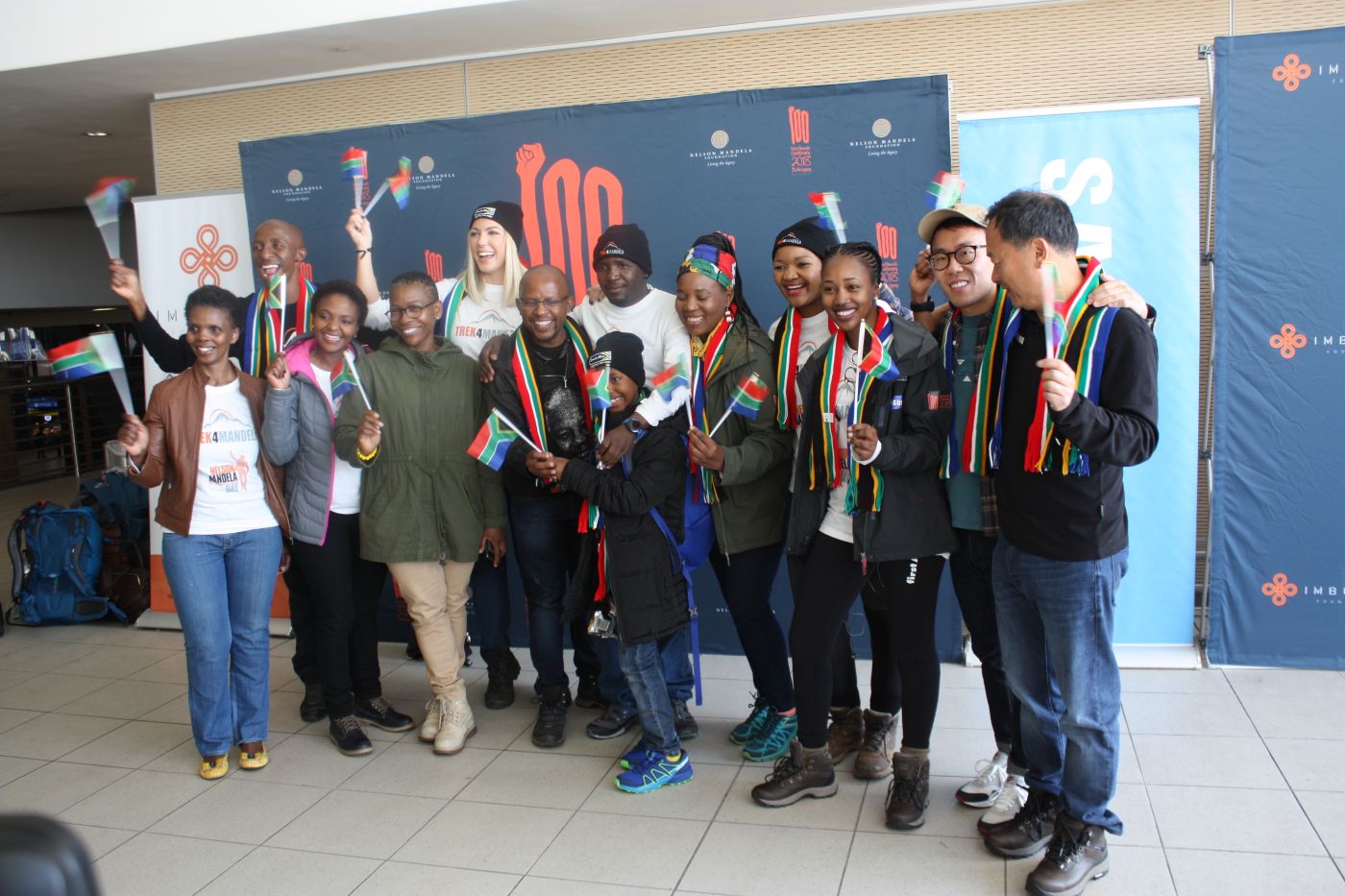 Watch a video of the 4 August 20178 send off for a group of climbers who aim to reach the summit of Africa’s highest mountain – Mount Kilimanjaro – in honour of Nelson Mandela, and to mark his centenary year.