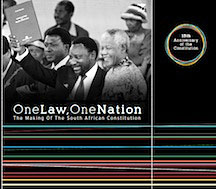 10 December, 2011– To mark the 15th anniversary of the adoption of South Africa’s 1996 Constitution, the Constitution Hill Trust in collaboration with Jacana has just published One Law, One Nation: The Making of the South African Constitution.

Authored by Lauren Segal and Sharon Cort, this book charts the histories that shaped the Constitution.

The Nelson Mandela Centre of Memory partnered the Trust on the research for the book. Verne Harris, Head of Memory Programming at the Centre, says: “We are honoured to have been involved in the production of this book. It at once traces the provenances and antecedents of the Constitution, discloses rich and previously little-used archival resources, documents the many contributors – including Mr Mandela – to the making of the Constitution, and sounds the call for the Constitution to be used as a continuing instrument of liberation.

“This is a story all South Africans should know and cherish.”

There is no doubt that, for Nelson Mandela, South Africa’s 1996 Constitution, together with the rule of law that it underpins, is the jewel in the crown of the country’s post-apartheid democratic order.

There is a long reflection by him on the Constitution in the unpublished draft sequel to Long Walk to Freedom, which he penned in the period 1998-2002. It comes after a passage detailing political challenges in the era of democracy and the demands on leadership created by these challenges. He continues:

“All these considerations, as important as they may be, should never be allowed to undermine our democratic Constitution, which guarantees unqualified citizenship rights to all South Africans ... It has a bill of rights on which a citizen can rely if any of his or her rights are threatened or violated. All of us, without exception, are called upon to respect that Constitution.”

Then he moves to the rule of law:

“The apartheid regime had put law and order in disrepute. ... Because of this crude practice, and out of my own convictions, I exploited every opportunity to promote respect for law and order and for the judiciary.”

A passage follows in which he details two instances in which, as President of the country, he was involved in Constitutional Court cases. His conclusion:

“These two examples clearly demonstrated that in the new South Africa there is nobody, not even the President, who is above the law, that the rule of law generally, and in particular the independence of the judiciary, should be respected.”

The reflection ends with an invoking of the imperative to make the Constitution a living reality for all South Africans:

“Equally important is the fact that the above considerations should never be an excuse for not addressing the basic demands and needs of our people ...”