Facilitators go through their paces in Soshanguve

“Community conversations” is a Nelson Mandela Foundation initiative aimed at facilitating dialogue about HIV/AIDS within communities. It follows a methodology called Community Capacity Enhancement (CCE), developed by the United Nations Development Programme to help communities identify their own concerns and find their own solutions.

Earlier this year the Foundation held conversations in all the nine provinces. At these conversations, community members elected volunteers to action committees, Community Action Team (CATS), to take the community’s decisions forward. Some of these volunteers were selected for this round of training on the CCE methodology and are now a strong resource in the community. Forty new facilitators attended the nine-day training session where they learned how to facilitate conversations in their communities.

Speaking at the community conversation, trainer Mpumi Mnconywa who assists with the quality assurance of the implementation of the methodology said it was the first time she had trained such a big group of young people.

“I found it very exciting because most of the young people are either infected or affected by HIV/AIDS as they have people in their families who are infected, and when it comes to intervention strategies young people are the best ones to carry them forward.”

She added that the CCE methodology had changed her perceptions about the state of HIV/AIDS in South Africa.

“I now realise the reason some prevention strategies don’t work is that they are imposed on communities. The CCE methodology allows community members to be part of the decision-making process. They get to identify their issues and find ways of solving the problems in their own communities,” said Mnconywa.

As a trainer, Mnconywa said she had already tried the CCE methodology in her community and it was a real eye-opener.

“Many people in my community weren’t aware of where they could go for help. Through the community conversations people got information and they realised that they could benefit from other members of the community, for example municipal officers.”

Mnconywa said she would like to see more communities engaging in dialogues and finding ways of dealing with HIV/AIDS.

Newly trained facilitator Nicole Dixon said the CCE methodology had taught her that change started with her and she was determined to be that change.

She has also learnt to match behaviour with ideals.

“Through the CCE we have formed an unbreakable chain and we have learnt to walk the walk and talk the talk through condomising, not stigmatising and treating the next person with respect.”

Dixon believes that in a few years there will be change.

“I will persist until I succeed and I will start that at home. When my son turns 11 I will talk to him about sex and using condoms so that he knows more about HIV/AIDS.”

“I have lost a lot of family members to AIDS and I have a brother who is living with it. So I thought it is necessary to join the action committee, not to only help my family but my community as well.
“I feel a need to touch as many people as possible, empower them and spread the message. They will be more informed and that will lessen the spread of HIV. In 10 or 15 years I will have achieved a lot.”

Another facilitator, Hazel Sibaya, said losing family members to AIDS made her interested in the community conversations initiative.

“I lost my youngest brother in 2005. He did not want to be hospitalised and he died of an AIDS-related disease Caring for him was very difficult and in that same year my father passed away and the next year my other brother also died of an AIDS-related disease. The whole thing convinced me to go out there and know more about HIV. If a person can change his or her lifestyle one can live longer with HIV/AIDS.”

The new facilitators had an opportunity to host their very own conversation today and put their new skills to practical use without the assistance of the Nelson Mandela Foundation.

The Foundation is continuing with the community conversations initiative for the next three years. 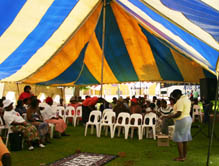 Facilitator, Sanitha Thebela, works through one of the community conversation tools “counting your losses”

Nicole Dixon, a new facilitator, shares her experiences of training