Not surprisingly, given the book’s title, Henry Brown has written a memoir about his legal career and the work he has done – drawing on his considerable legal and life experience - in the field of mediation.

For the Nelson Mandela Foundation, the text offers multiple intersections with the life and times of its Founder, and provides fascinating insight into the provenance of three of its archival collections – Mandela’s prison letters, a collection of legal records donated by Hymie Bernadt, and a collection of papers donated by Judge Thumba Pillay. For myself, I would have wished for many more layers of the personal than what Brown actually gives us – he keeps his focus unrelentingly on the professional, even the technical, seldom providing readers with a sense of his views on life, love and everything else. 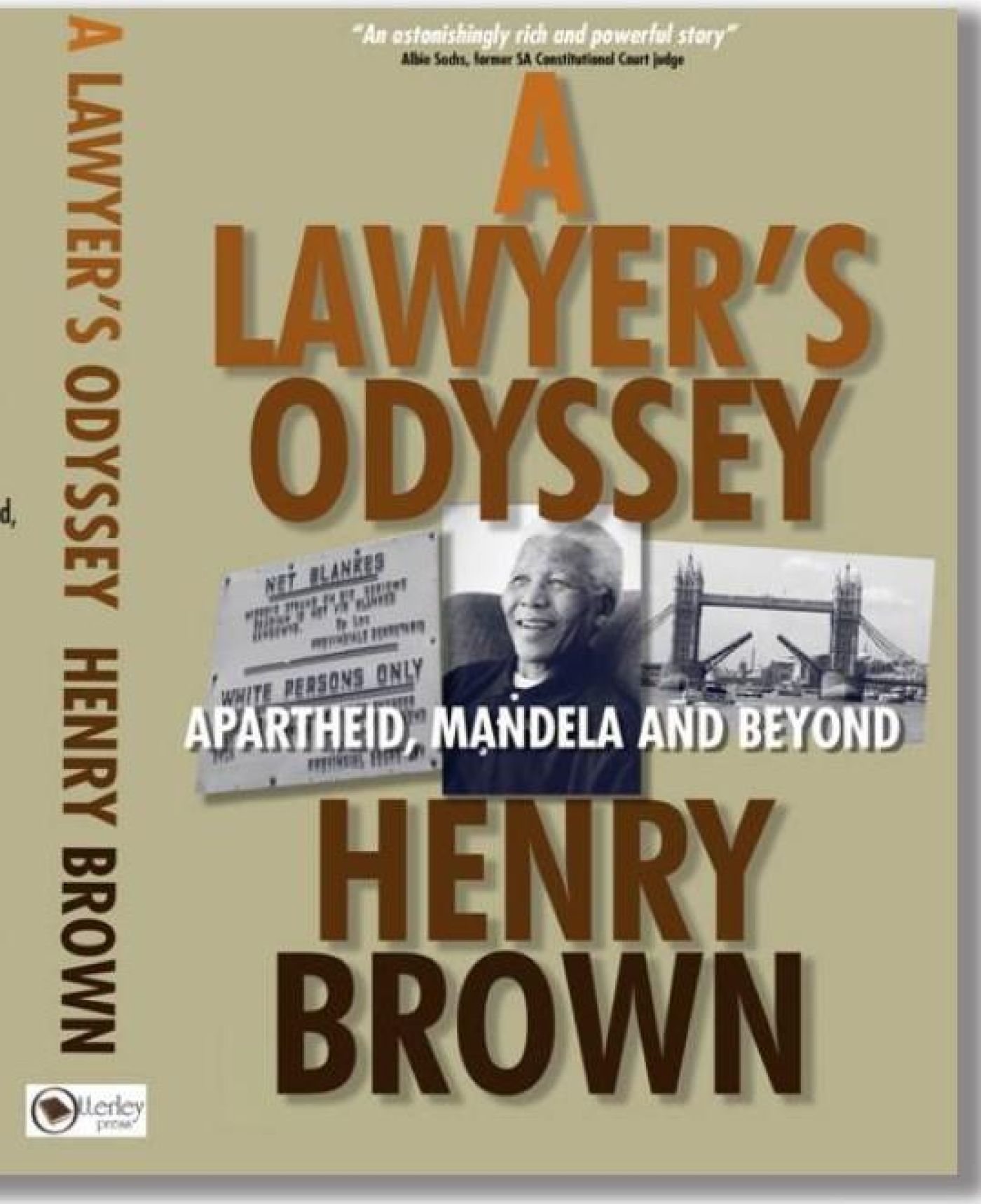 In some ways his approach provides a unique perspective in a publishing space dominated by the male titans of South African human rights lawyering, from Mandela to Bizos, Sachs to Moseneke. Both his view and his voice are humble – he confines his line of enquiry to technical detail rather than big political questions, and his human rights work is always just one thread in a tapestry of general legal practice.

He self-identified as a generalist with a range of special interests – including what he calls ‘political’ work, intellectual property, immigration law, family and divorce law. The latter part of his career he devoted to a passion for mediation work, becoming a renowned (and widely published) authority in the field (this, of course, is not something Brown makes plain in the book, I had to rely on Google for that …).

For many years Henry Brown was just a name to the Foundation, appearing often in the records which Hymie Bernadt donated to us in 2005. Bernadt had been a partner in the Cape Town-based firm Frank, Bernadt and Joffe, which had acted for Mandela through the years of his incarceration. Brown’s narrative brings the firm to life – its structure, the people who worked there, its work processes and cultures. And it provides a rich array of technical detail on the legal support the firm gave to Mandela and his family in the period 1965 to 1971.

Brown handled a range of matters, consulted with Mandela on Robben Island more than once, and supported legal and related interventions. There was support for Mandela on multiple charges of breaching prison regulations, for Winnie Madikizela-Mandela on a charge of having breached a banning order, for family members needing financial and other assistance, and for Mandela in defending himself against an attempt by the apartheid state (in 1967) to have him removed from the roll of attorneys on the grounds of his alleged membership of the Communist Party. In terms of the latter, Brown, predictably, provides no analysis on what is the vexed question of whether Mandela ever was a card-carrying member of the Party. As always, he confines himself to the technical dimensions of the legal support he provided to Mandela in the matter.

In 1971 Brown left South Africa to make a new life in London with his family. They moved into the Muswell Hill area, living literally just down the street from Adelaide and OR Tambo and having as close neighbours other South African exiles, like the Dadoos, the La Gumas and the Septembers.

Brown immediately joined the British Anti-Apartheid Movement, and remained a member for many years. But A Lawyer’s Odyssey is a legal memoir, so Brown frustratingly offers no reflection, no exploration, of life, love and everything else in the movement and in Muswell Hill.

In 1975 he and Arnold Simanowitz set up their own law firm, and it wasn’t long before Brown found himself again acting on behalf of Nelson Mandela. In 1978 he was briefed by Mac Maharaj on a detailed expose of conditions on Robben Island written by Mandela and smuggled out to Durban-based lawyer Thumba Pillay.

Over the next two years Brown supported Pillay and his old boss Hymie Bernadt in the action designed to defend the rights of political prisoners on the Island. A listing of Brown’s human rights work through nearly four decades reads like a South African struggle who’s who. He represented many Robben Island prisoners other than Mandela. He was Albie Sach’s attorney during the latter’s first period in detention. He worked on the inquest into the death in detention of Imam Abdullah Haron, the libel case of Robert Smangaliso Sobukwe, the apartheid state’s criminalisation of homosexuality, and apartheid spy Craig Williamson’s infiltration of the IUEF in Europe. At different times he represented Chris Hani’s uncle Milton Hani, Chief Sabata Dalindyebo (a matter in which he worked closely with Griffiths Mxenge), SWAPO (the South West African people's Organisation) and IDAF (the International Defence Aid Fund).

The experience of reading Brown’s modest, very matter-of-fact, accounts of his role at these moments and with these historical figures reminded me of nothing so much as my first reading of John Irving’s The World According to Garp. I loved that book. And I love Brown’s.