Former US President Barack Obama believes in “Nelson Mandela’s vision ... I believe in justice and in a premise that all of us are created equal.”

Obama delivered the 16th Nelson Mandela Annual Lecture, in partnership with the Motsepe Foundation, in Johannesburg on Tuesday 17 July 2018.

To honour the centennial of Madiba’s birth, the lecture’s theme was “Renewing the Mandela Legacy and Promoting Active Citizenship in a Changing World”, and focused on creating conditions for bridging divides, working across ideological lines, and resisting oppression and inequality. 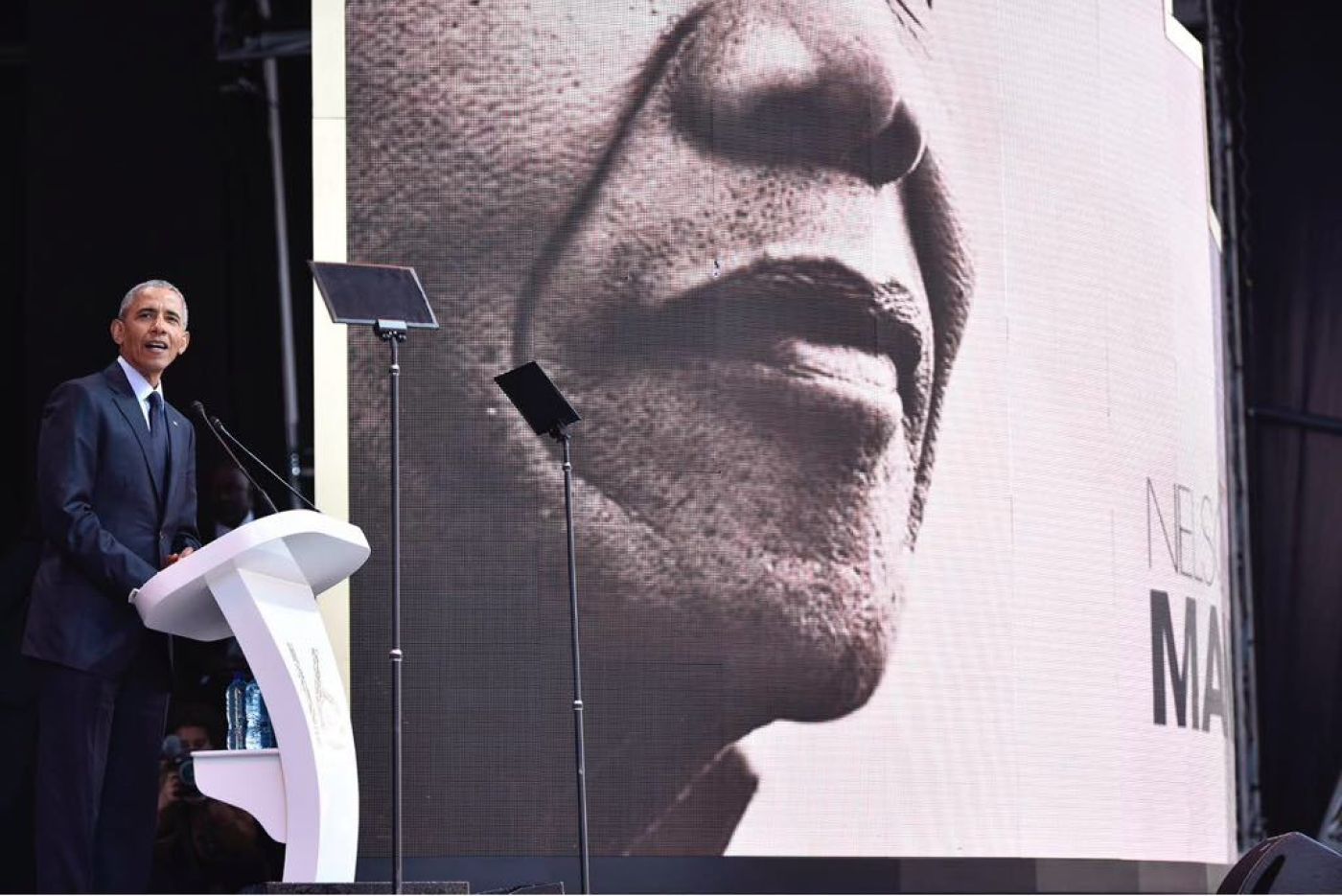 Former US President Barack Obama delivered the 16th Nelson Mandela Annual Lecture, in partnership with the Motsepe Foundation, in Johannesburg on 17 July 2018.

Mkhumbuzi, a young entrepreneur who is a co-founder of the Tshimong debating, leadership and public speaking initiative, told the audience that despite notable human progress, global political trends showed that democracy and the values that Mandela had espoused are under siege.

She listed these values as tolerance, inclusivity and the rule of law, and said that they need to be reinvigorated and Mandela’s legacy should especially motivate the youth, who “I believe are the true custodians of our future”. 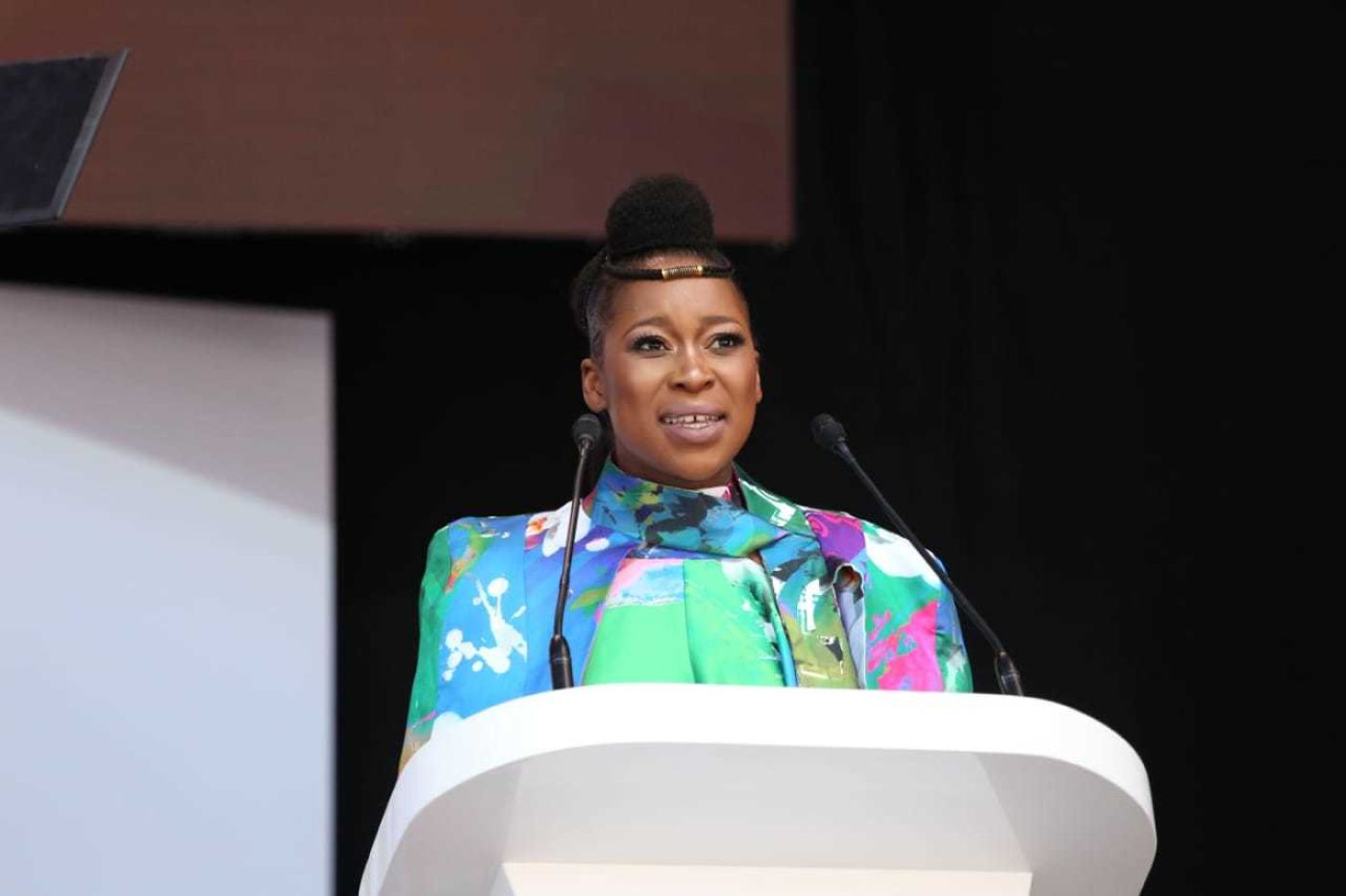 Programme director Busi Mkhumbuzi said despite notable human progress, global political trends showed that democracy and the values that Mandela had espoused are under siege.

Ndebele said the 15 000-strong crowd that filled the Wanderers Stadium was the largest lecture audience in the 15-year history of the Nelson Mandela Annual Lecture. He said the late Ahmed Kathrada, as a Foundation trustee, had always wanted the Annual Lecture to take place in a stadium. His wish had been granted.

Ndebele said the world had welcomed Obama’s election to the US Presidency in 2008 and that he had inspired universal belief in human unity. Later, the realities of the US political system had tested Obama “to the limit”, but when he took office on 20 January 2009 those who supported him dreamed of a global future.

Motsepe, addressing the crowd, said: “The presence of each and every one here is living proof that the legacy and spirit of Nelson Mandela is alive.”

“Today we are in the presence of two inspiring symbols,” she declared.

Ramaphosa, who received a standing ovation, said the Nelson Mandela Annual Lecture, from the very beginning, had been “global in its ambition and broad and inclusive in its outreach”. Speakers had sought to describe the tasks that needed to be undertaken to further secure the well-being of humanity.

Ramaphosa said that his thuma mina (send me) message was “none other than Mandela’s message” of personal service.

Obama, as US President, embodied many of the values and aspirations that we saw in great leaders like Mandela, Ramaphosa said – humility, wisdom, compassion, the ability to inspire hope and inspire a nation to action. Like Mandela, Obama had dedicated his life to championing the cause of the poor and pursuing justice.

Concluding that South Africa had in Obama found an ally, a kindred spirit and a brother, Ramaphosa welcomed him to the podium to deliver the 16th Nelson Mandela Annual Lecture. 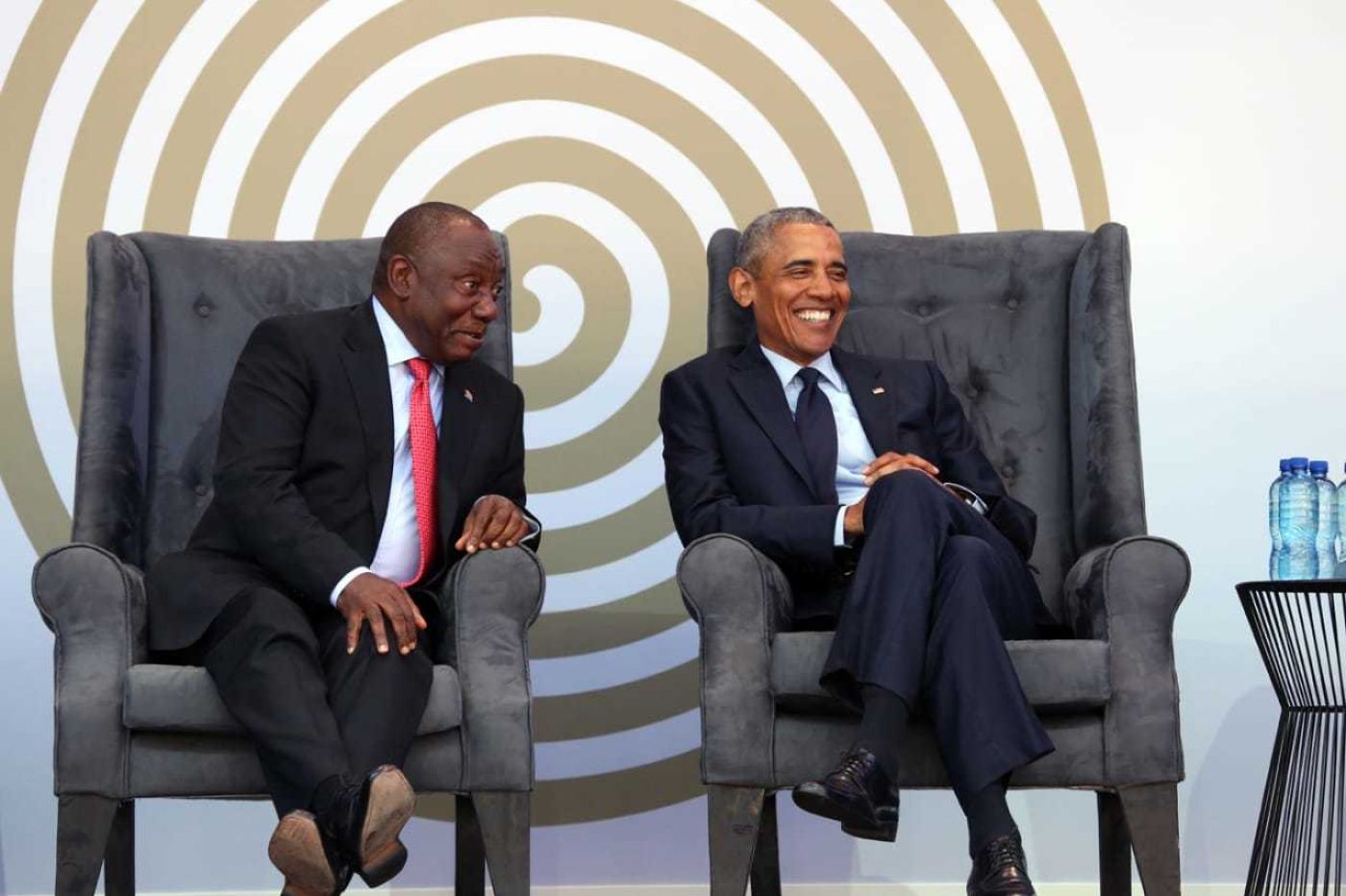 Obama continued, "[Mandela] came to embody the universal aspirations of dispossessed people all around the world with hopes for a better life, and the possibility of a moral transformation in the conduct of human affairs.

“Madiba’s light shone so brightly ... that in the late seventies he could inspire a young college student on the other side of the world to re-examine my own priorities – to reconsider the small role that I might play in bending the arc towards justice.

“And now an entire generation has now grown up in a world that by most measures has gotten steadily freer, healthier, wealthier, less violent and more tolerant during the course of their lifetimes. It should make us hopeful.

“Let me tell you what I believe. I believe in Nelson Mandela’s vision, I believe in a vision shared by Gandhi and King. I believe in justice and in a premise that all of us are created equal.”

In his speech Obama tracked the enormous social and democratic progress the world has made in the 100 years between Mandela’s 1918 birth and 2018.

The world had changed from one just emerging from a devastating war and in which most of what is now the developing world was under colonial rule, Obama said. Women, across the world, were seen as subordinate to men, some races were seen – almost universally – as naturally subordinate and inferior to others, and business saw nothing wrong in seeking to exploit workers, of any race or creed. 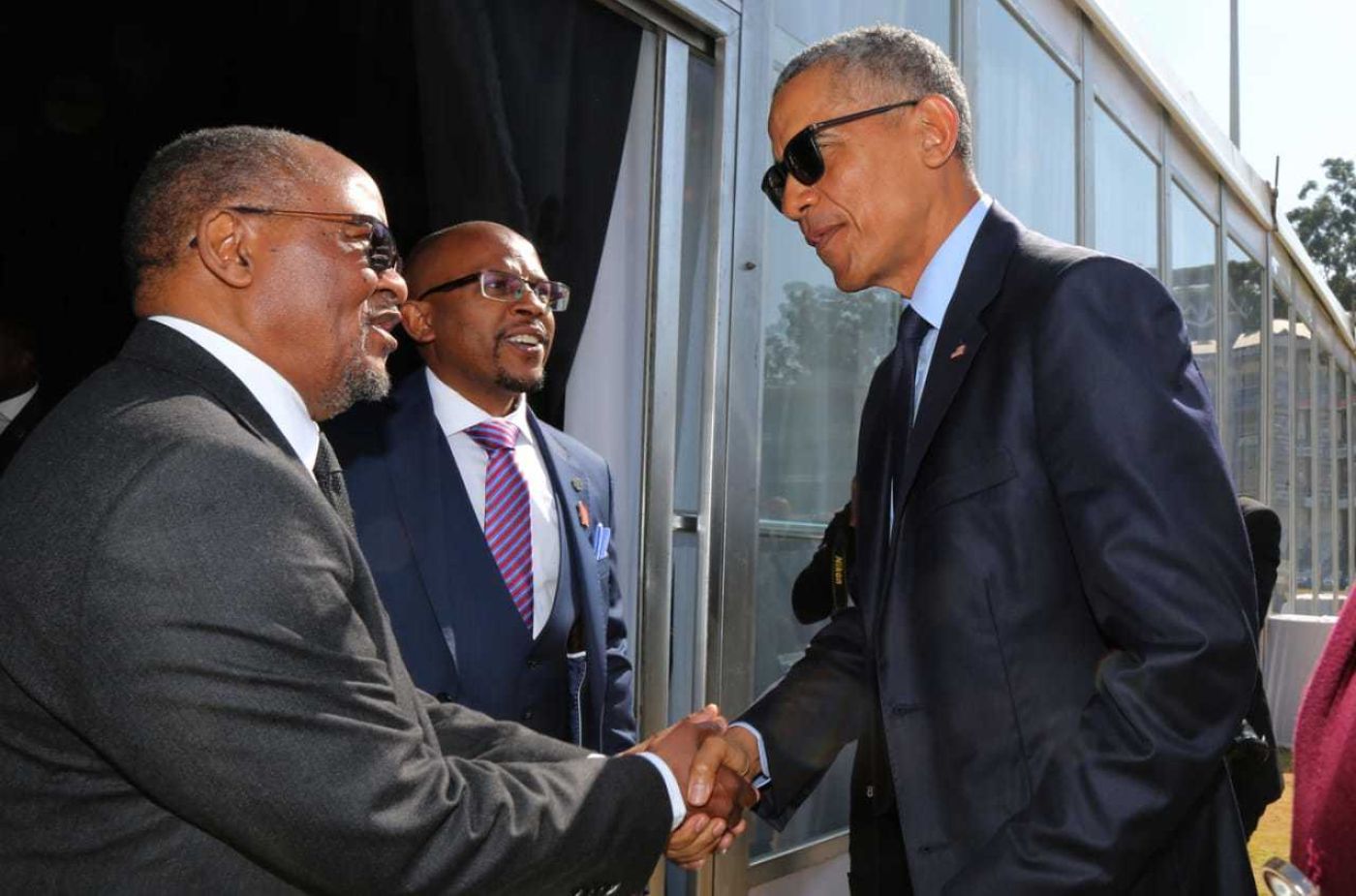 Since then colonialism had come to an end and the world had, in general, embraced a new vision for humanity, based on the principles of democracy, the rule of law, civil rights and the inherent dignity of every single individual, Obama said.

This kind of progress was the kind of progress to which Mandela had dedicated his life, Obama said. At the outset his struggle was focused on South Africa and its disenfranchised non-white population. Later it broadened to encompass humanity.

Technology and the internet had also brought massive progress.

“Now an entire generation has grown up a world that has become freer, healthier, wealthier and more tolerant, in the course of their lifetime. That should make us hopeful.”

But the world stands on the brink of letting go of all this progress, because leaders had ignored its negative aspects.

Women and girls were still often oppressed and subject to abuse, and while there had been general economic progress, many individuals had been bypassed. A handful of people held more wealth than the “bottom half” of humanity and economic development often tracked old wealth patterns. The world’s wealthiest people often had disproportionate economic clout and influence over the media and economic policy.

At the end of the 20th century, when some were declaring the end of history, too many world leaders missed the growing backlash against the socio-economic transformation that had taken place, Obama said, a return to politics of fear and resentment that began to appear at “a pace unimaginable a few years ago”.

The former US President said, however, that he still believed in “the vision of Nelson Mandela”, one that was shared by people such as Indian human rights activist Mahatma Gandhi and American civil rights activist Martin Luther King: “A vision built on the premise that all people are free ... that we can achieve more through international peace and cooperation.”

Obama said the only way to effectively address global challenges such as climate change and disease was through developing systems for increased international cooperation, not less.

Obama said the world needed to keep in mind that “we are all bound together by common humanity” and that he found it surprising that he had to aver this fact in today’s world.

Mandela had showed the world it was important to teach children to engage with people who were different from them, or held different views.

“This leads me to my final point: we must never abandon Madiba’s persistent struggle for hope, the long walk to freedom, justice and equality.” 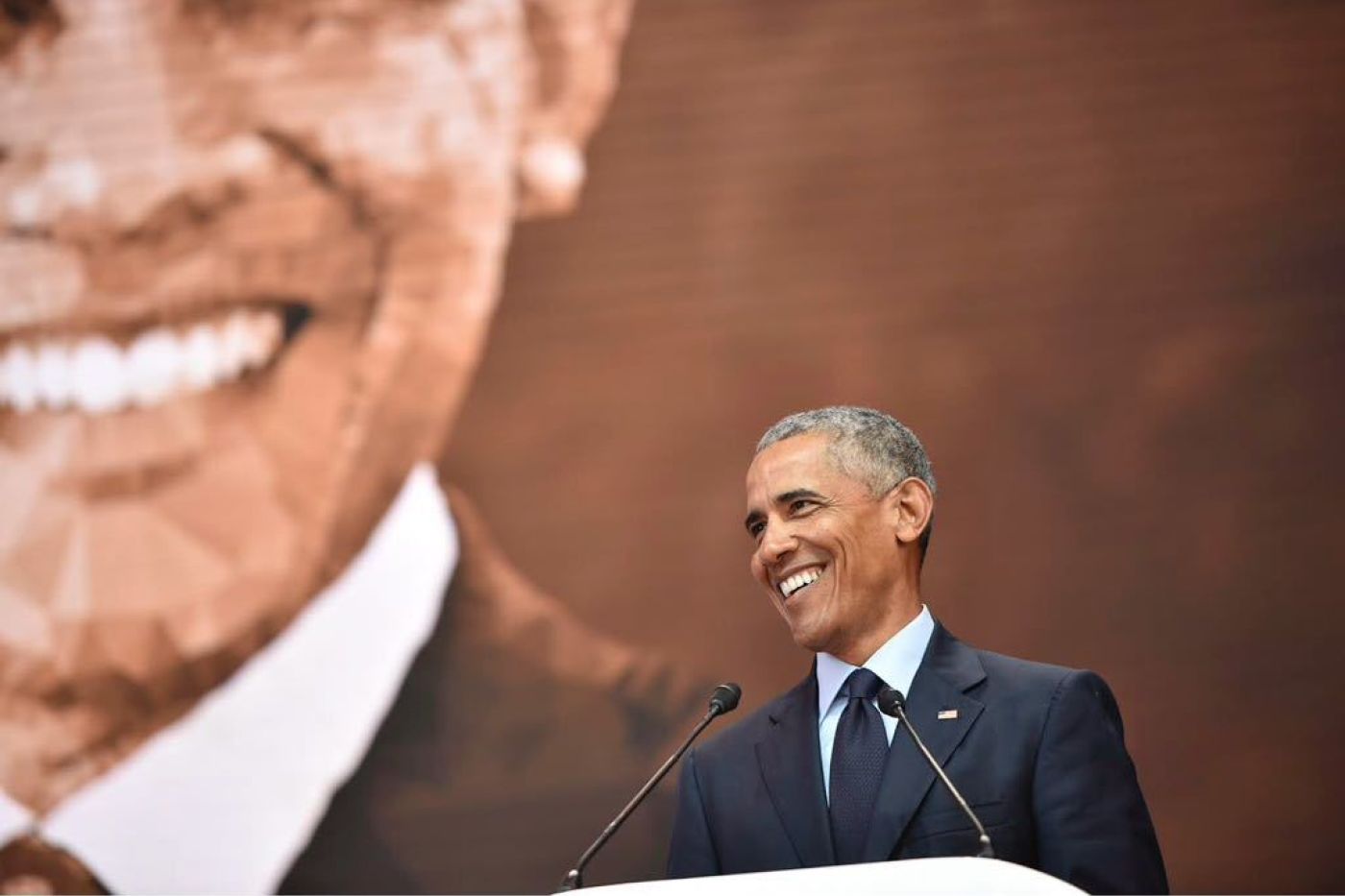 Here is a selection of images from the 16th Nelson Mandela Annual Lecture.