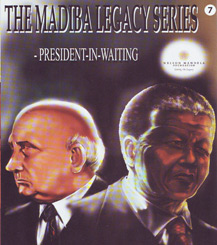 Entitled President-In-Waiting, the comic takes readers from Mr Nelson Mandela’s release in prison to South Africa’s first democratic elections in 1994. The comic covers themes such as Madiba’s release from prison, the negotiated transition, political violence in KwaZulu-Natal and the African National Congress’s victory in the national elections.

The last issue in the series is due out in November and a book containing all eight comics is due for release in July 2008.

Readers may order free copies of the new comic by emailing the Nelson Mandela Centre of Memory at nmf@nelsonmandela.org.

Click here to read more information on the full series. The titles of the comics published so far are:

1. A Son of the Eastern Cape

In the first comic, we are introduced to Nelson Mandela’s childhood in the Eastern Cape. His birth as Rolihlahla in the rural village of Mvezo; the death of his father who left him in the care of the Regent, Jongintaba; his passage into manhood, and his years at Clarkebury Missionary School where he was given the name Nelson.

He defied the regent by running away from an arranged marriage to Johannesburg.

In the second comic, we learn about Mr Nelson Mandela’s path to leadership in Johannesburg.

His political awareness and involvement grows and he is subjected to racial abuse like other citizens in Johannesburg.

He joins the leadership of the African National Congress (ANC) and is arrested on a charge of treason.

In the third comic, Mr Nelson Mandela’s life takes a turn as he meets Ms Winnie Madikizela, who he later marries.

He continues with the ANC’s defiance campaign against apartheid. He operated underground, mobilising ANC resistance.

At that same time the Mkhonto we Sizwe (MK) was formed to commit sabotage against the apartheid state.

In the fourth comic, Mr Mandela faces trial and imprisonment. Mr Mandela was arrested on his return to South Africa and jailed for five years.

In 1964, he appeared with comrades in the Rivonia Trial. They escaped the death sentence and were sentenced to life imprisonment.

In the fifth comic, we learn about Mr Mandela’s imprisonment on Robben Island.

He endures daily physical labour at the maximum security prison; the harsh apartheid prison system is exposed, as his son and mother die he is not allowed to attend their funeral.

Also at this time, Mkhonto we Sizwe launched a sabotage campaign, and the “Free Mandela” campaign began.

In the sixth comic, Mr Nelson Mandela struggles for solidarity and freedom. It shows how many people visit Mandela during his stay in prison and culminates in his transfer from Robben Island.

Once he has left Robben Island he is transferred to the Victor Verster Prison, and is ultimately released.