The handover of a letter penned by Mr Mandela on Robben Island, a letter written by Ahmed Kathrada, and a series of legal documents took place at the Foundation’s offices in Houghton, Johannesburg.

Judge Pillay – who was highly active in the anti-apartheid movement as a founding member of the United Democratic Front and a member of the Natal Indian Congress and African National Congress – received the letter penned by Mr Mandela after it was smuggled out of Robben Island by Mac Maharaj, who was released from prison in 1976.

The letter, addressed to Judge Pillay’s legal firm, gave instruction to begin court proceedings against the apartheid government’s Department of Prisons, on the grounds of poor conditions in correctional facilities and the treatment of inmates.

Judge Pillay said: “We need [the files] to be kept for posterity. It’s part of history and these are authentic documents of the conditions in prisons at that time.”

In addition to the letter, Judge Pillay donated all the legal files associated with the court application to the Foundation’s archives.

“I would like my grandchildren and children throughout South Africa to have the benefit of these documents and see what it was like in prison and how lawyers worked to assist those in prison,” he said.

The Foundation’s archives were created with the express intent of making documents relating to Mr Mandela’s life accessible to the public, but the collection is by no means exhaustive as thousands of archive items exist across the world.

Razia Saleh, memory programme officer for the Foundation, said, “It is great that we’re still finding original Mandela documents. Every now and then we find real gems, like these documents.”

The letter was originally given to the Foundation for safekeeping in December 2009 and is one of the key documents featured in Mr Mandela’s latest book Conversations with Myself. The book gives readers insight into the man behind the political figure and humanitarian. 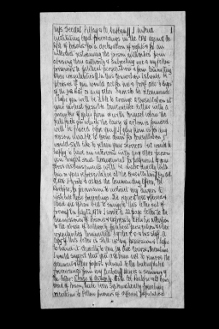