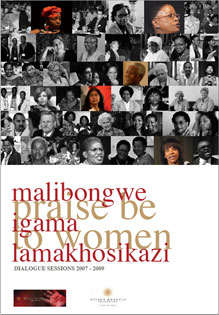 December 7, 2009 – The Nelson Mandela Foundation has released a book celebrating the three Malibongwe Dialogues that the Foundation has convened over the last three years.

Held in August (Women’s Month) from 2007 to 2009, the three Malibongwe Dialogues have looked at the role of women in South Africa’s past, present and future.

The first Malibongwe Dialogue, in 2007, commemorated women who had been involved in South Africa’s liberation struggle.

The 2008 Malibongwe Dialogue focused on two themes: economic empowerment for South African women, and what the women of today could learn from their predecessors.

The 2009 dialogue, following on from the 2008 dialogue as well as from the Seventh Nelson Mandela Annual Lecture, delivered by Grameen Bank head Professor Muhammad Yunus earlier in 2009, looked at the role of women in the drive to banish poverty.

From now on, the Malibongwe Dialogues will be held in a new format, aiming to involve communities around South Africa.

The 2007-2009 dialogues’ key speakers and reflections have been captured in the book, Malibongwe igama lamakhosikazi (Praise the name of women).