In the last of a series of events to commemorate the passing of Madiba, the Nelson Mandela Foundation facilitated a dialogue on 15 December about the future of South Africa.

The dialogue at the Nelson Mandela Foundation, titled Imagining Futures, saw three diverse young South Africans – CEO and businesswoman Trudi Makhaya, student activist and Wits SRC president Nompendulo Mkhatshwa, and rapper and poet Tumi Molekane – engaging with the legacy of Madiba with an audience that included members of the Mandela family, ambassadors, high commissioners and representatives of the Mandela Rhodes Scholarship programme, among others.

An exciting part of the evening, was the donation to the Foundation archives of more than 100 raw interviews conducted by Radio Diaries founder Joe Richman for the documentary Mandela: An Audio History. 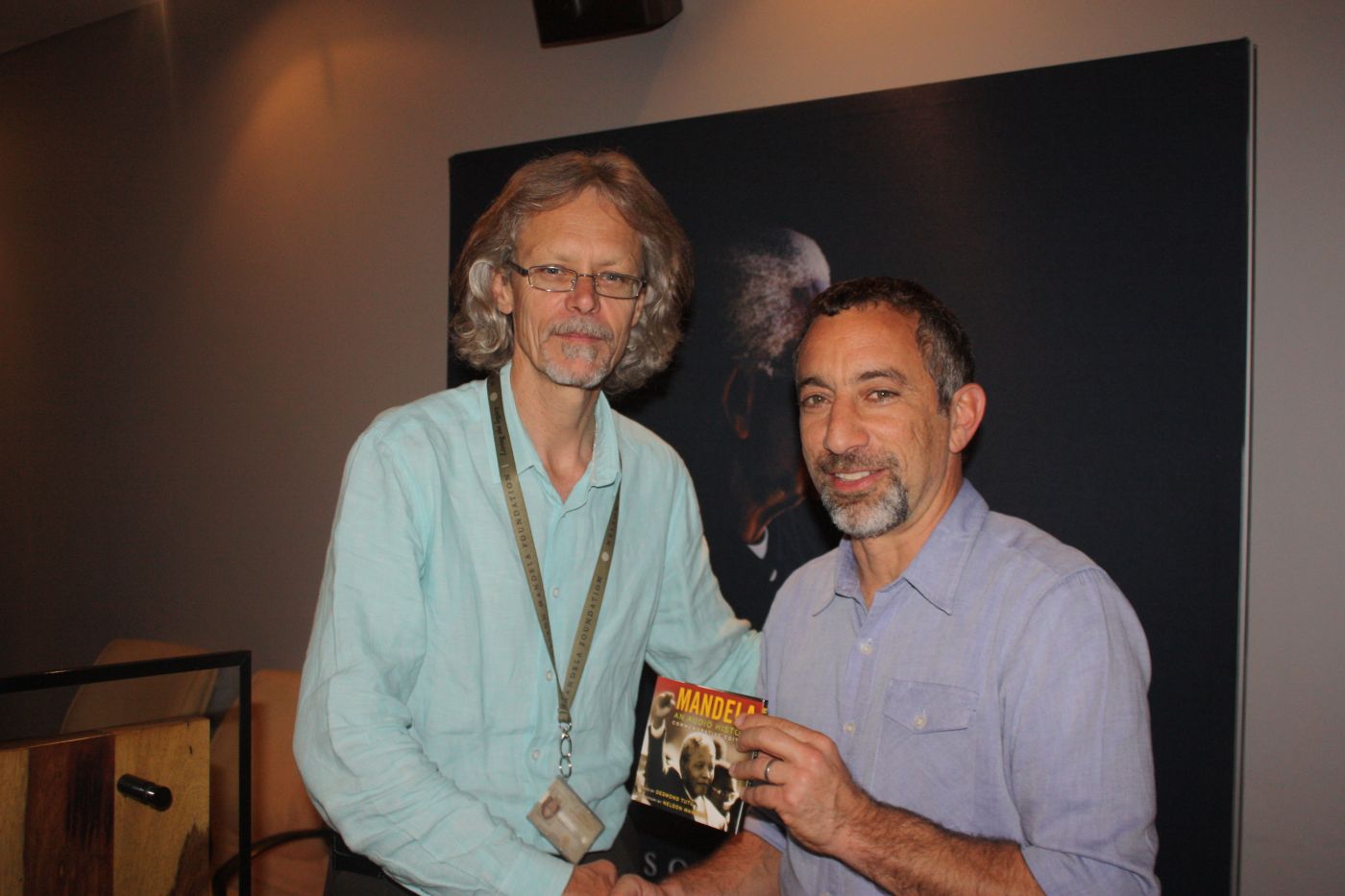 “This year ends with us marking the second anniversary of Madiba’s passing with this special event tonight; an event that’s going to have two pillars of our mandate showcased.

“On the one hand we do memory work because we are the only institution that has been entrusted with Madiba’s private papers, and on the other we also do dialogue. And for the memory part, I’d like to recognise and acknowledge Joe Richman – thank you for making your collection available to us. It’s through donations like yours that we are able to make our collections rich.

In the spirited dialogue, panellists Makhaya, Mkhatshwa and Molekane raised questions around the “idolisation and saintifying” of Madiba; capitalism and pan-Africanism; the state of education in South Africa and the barriers imposed on young people by education funding, among others.

Introducing the panellists, facilitator Lunga Nene said that the thinking behind Imagining Futures was that the youth or those starting out in certain industries are the best people to tell us “how to imagine, what to leave behind and what to take forward”.

First up, Molekane related a dream he had had where Archbishop Emeritus Desmond Tutu said South Africa was on the right track but that somewhere along the way, it had lost sight of some of the things it had set out to do.

“He said, ‘We were almost great’ … and I started to think about what that means, and it has become a bit of a mantra for me,” Molekane said.

“In a country where these licensed ideas of freedom, democracy and identity are starting to get infected by the real fact of poverty, corruption, insecurity, privilege and the heft of capitalism, we are starting to see the cracks.

“What was a picturesque image of good triumphing over bad has become a complicated abstract. We’re approaching that point where we are seeing a new show develop, a show titled ‘We were Almost Great’.

“In imagining futures, when I think of Nelson Mandela, for me two images emerge; the one very clear and one a little bit murky. The clear one is this moral giant, this symbol of freedom, a courageous father of the nation, kind of turned into a postcard favourite.”

Molekane said as a poet and musician he draws inspiration from symbolism and cultural iconography, but it becomes dangerous when you “mythologise and turn freedom fighters into Father Christmas” because there is no context to what people stood for.

“Then there’s this other, murkier image of Nelson Mandela as a politician, dare I say, a co-opted politician who adopted neo-liberal economic policies that have left a gap between rich and poor in South Africa … almost as wide as it was during apartheid, if not worse.”

He said it is difficult to critically examine Mandela’s government when he is considered the father of the nation.

“It’s a contradiction. Politically you examine, you hold people accountable, but when you say someone is the father of the nation, it becomes very difficult to have that critical dialogue. To properly memorialise and respect people’s legacy, you have to paint the full picture, successes and failures, shortcomings and incredible victories.”

Student activist Mkhatshwa believes when looking into the future, it is important to reflect on and interrogate the past.

“As much as there is a demand from young people about what they want moving forward, occasionally they need to take cognisance of where we’ve come from and where we are, and where we’re going.

“When we think of the legacy of Nelson Mandela, we can without doubt attest to the fact that the former president, together with his generation, left a legacy, an admirable one for that matter. A legacy that allows us to gather … to interrogate and to engage this legacy he and his generation left.”

She said everyone can leave a legacy, but that what is important are the realities and the aftermath of those legacies. 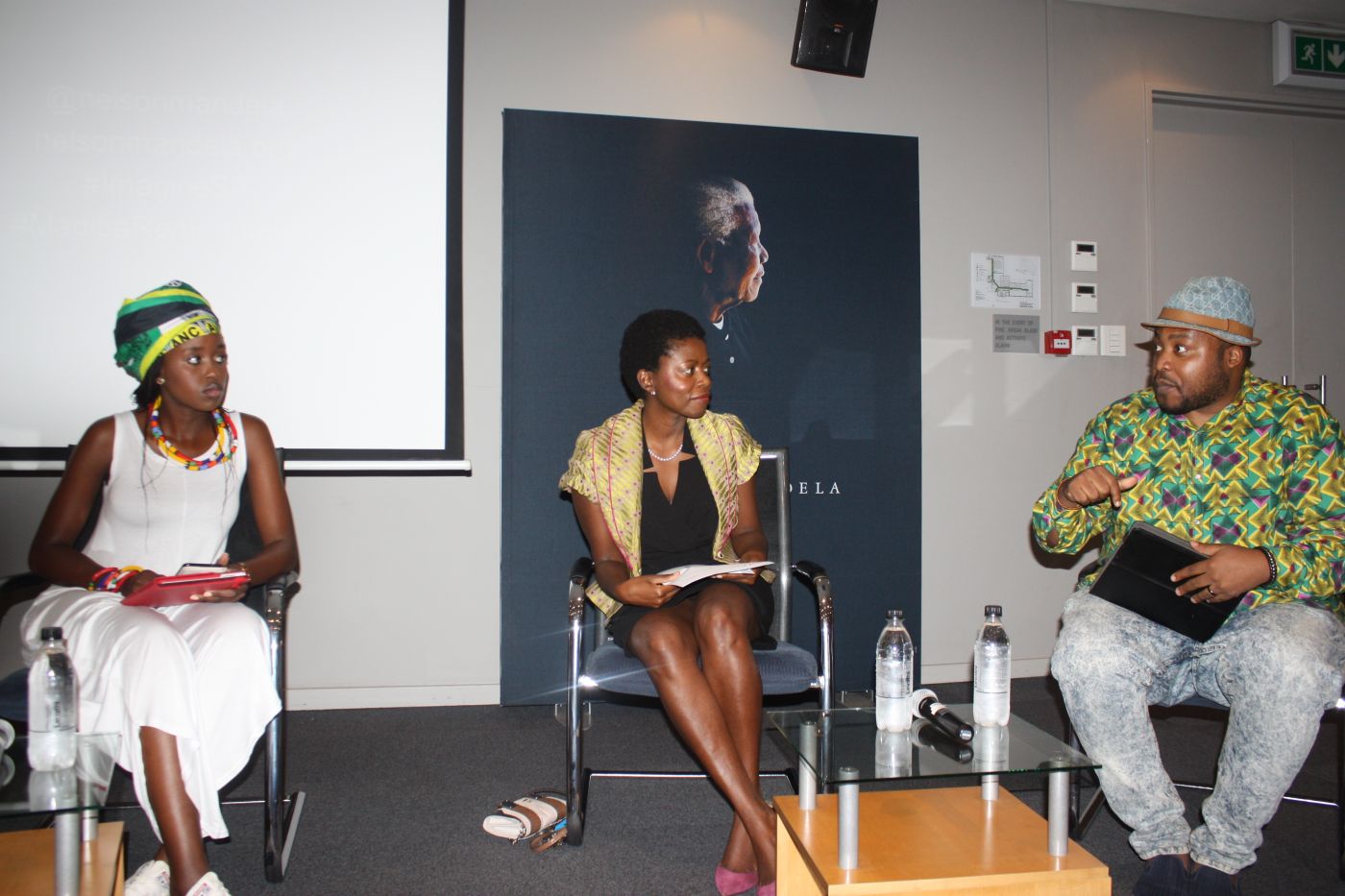 “When we speak about a legacy that one has left, is it the struggle that has left us with a freedom that allows us to hold the state accountable? A freedom that allows us to go to any school regardless of race, of course, taking into cognisance how race and class is linked together and how that on its own has been a hindrance to whether or not a particular race has access to education.

“A freedom that has allowed the youth of 2015 to rise and own the streets in the name of free equality and equal education. Or are we talking about a legacy that’s passed laws that are entrenched in the economic inequalities and injustices that leave our matriculants outside the doors of higher education and our graduates unemployed?”

Mkhatshwa said when she thinks legacy in the name of Mandela, it is the fact that education is the most powerful weapon you can use to change the world.

“As much as it is clichéd, I think it is most relevant to the students of 2015. The manner of non-violence that we took in our approach to our protest, that was the core of our tactics … that our protests and our actions ought to remain non-violent merely because we believe that we’re not here to destroy anything. We believe that we are merely here to make our demands and we want to be heard.”

She said faced with a situation where student representatives are undermined by people who do not want to engage in the boardrooms meant for engagement and lobbying, they have no option but to take their grievances to the street.

“The one way you can ensure that people are still listening to you is by remaining impactful and tactful, but at the same time remaining non-violent.

Mkhatshwa said education should be used to address the socio-economic ills of the country, “… ills rooted in a legacy that sought to create supposed greener pastures by creating an inferior education system to manage a particular race [and keep it] from posing a threat to a system that comforted a minority”.

She called for a system that offers free education, most accessible to the working class and the poor, which is representative of geographical context and not a system that “regurgitates graduates that cannot make a difference to the socio-economic status quo of this continent”. 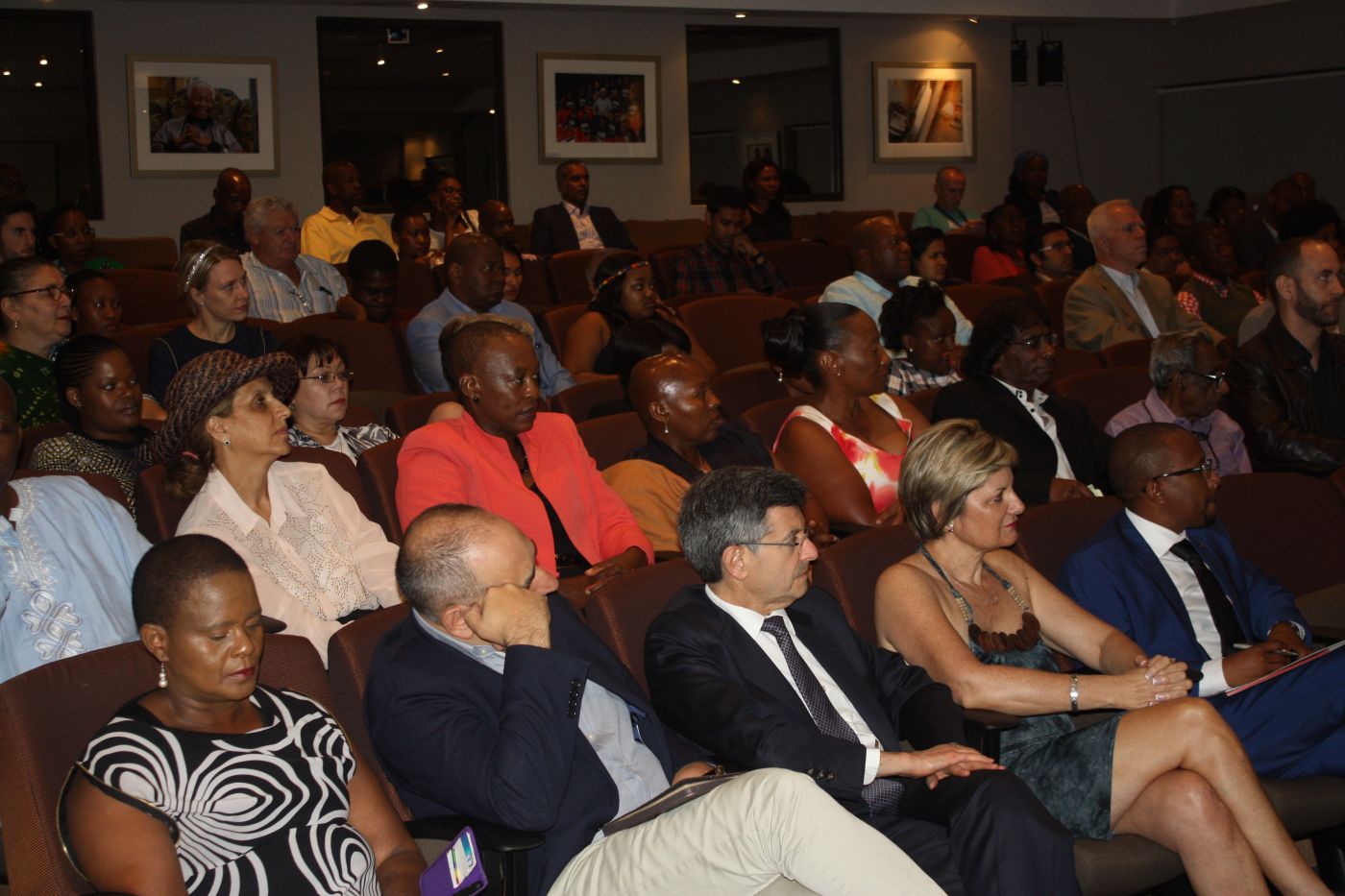 The audience listens intently as the dialogue unfolds

“We must have a free African curriculum by African academia for African scholars to solve African problems using African solutions.”

The theme of changing the status quo continued in businesswoman Makhaya’s contribution to the dialogue.

“Though Tata Mandela is free of us … we’re engrossed in some hard questions about his legacy. I’ve been thinking about how he shaped the post-apartheid economy. It is not a topic that dominated his presidency, but his presidency certainly laid the seed for what was to follow.”

She said communism, socialism and capitalism appear to be the spectrum that economic policymakers have to play within.

“But isn’t it our role as South Africans, and also as Africans, to blow up or reconstruct this spectrum? To come up with a new, human-centric way of organising production and consumption?”

Africa, she said, is said to be the new frontier and on the continent one economic system – capitalism – holds sway. But this was not always the case.

She warned that capitalism is in deep crisis in the rest of the world, particularly in the West. The current brand of capitalism that prevails in many African countries is tainted by cronyism and predatory elements, and for too long capitalism has been dictated from the outside.

“New, sometimes heated conversations are under way to redefine capitalism and its role in human progress. Collaborative, inclusive, conscious, humanistic – these are some of the new words being thrown about to think about ways to chart the search for an alternative capitalism.

“Madiba was about doing things differently. We need to reimagine capitalism.”