July 11, 2008 – Liberian President Ellen Johnson-Sirleaf visited the offices of the Nelson Mandela Foundation in Houghton today to see the work of the Foundation and meet some of its staff.

Johnson-Sirleaf is in Johannesburg to take part in Mr Mandela’s 90th birthday celebrations and will be the keynote speaker at the Nelson Mandela Annual Lecture in Soweto tomorrow. Today’s visit formed part of her packed three-day schedule.

On entering the centre she was greeted by singing-and-dancing staff members and enthusiastically joined in the dancing.

The president was then shown a selection of material from the Nelson Mandela archives including private papers that Mr Mandela wrote in prison and a school picture from the 1930s. The head of the Memory Programme, Verne Harris, explained that the purpose of the programme was “to try and make sure that this material is made available to a wider audience”.  Johnson-Sirleaf described the material she was shown as “precious”.

Before leaving the Foundation for the Apartheid Museum, the Liberian leader was presented with a beaded photo frame of herself and Mr Mandela by Molly Loate of the Nelson Mandela Foundation. “You can’t help being moved by her and touched by her,” said Loate. 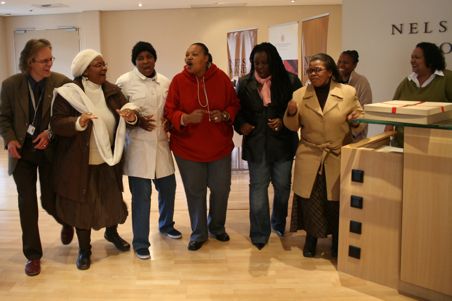