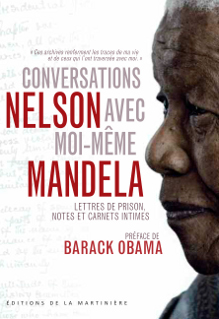 the French edition of the book Conversations with Myself

December 1, 2010 – Nelson Mandela’s new book, Conversations with Myself, released on October 12, 2010, has taken readers in France and Portugal by storm.

The French edition titled Conversations Avec Moi-Meme has been on the list of best selling books in France for five weeks, reaching number 15, and has been reprinted three times. The book has been just as well received in Portugal and has been on its best seller list for three weeks.

The Portuguese book titled Arquivo Intimo was launched in Lisbon, Portugal at an intimate affair at the South African Embassy, and presented by former Portuguese president Mário Soares. Proceedings were broadcast on Portuguese television.

Drawing on extensive archives, Conversations with Myself takes readers through key phases in Mr Mandela’s life, from the early stirrings of his political career through to his days in prison on Robben Island, during his tenure as South Africa’s first democratically elected president and into his retirement.

To find out more about the book, its writing, reception and retailing, please visit the dedicated page.