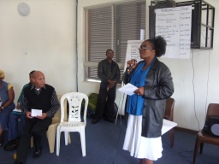 A facilitator talks at the Community Conversation in Albert Park

August 24, 2009 – Albert Park, a culturally diverse suburb in Durban where many immigrants live, was the setting for a community conversation on August 15 to promote social cohesion among residents.

The Nelson Mandela Foundation (NMF), in partnership with the KwaZulu-Natal (KZN) Christian Council, the KZN Refugee Council, the Refugee Social Services, the Union of Refugee Women and Abahlali BaseMjondolo (an organisation representing residents of informal settlements), organised the dialogue as a follow-up to a similar conversation held in Cato Manor on May 23, 2009.

The conversation series in communities around South Africa aims to help migrants and host communities live together in peace.

Albert Park residents take pride in representing so many different cultural groups, but it was clear from the conversations that there are problems which the community is eager to solve.

“If we can be taught how to do these dialogues, we will not need [further] help in solving our own problems,” said one participant.

The conversations were aimed at guiding the community to identify and explore the problems they were facing. To achieve this, the participants went through various exercises aimed at promoting dialogue between them.

One exercise saw the participants divided into groups, where they were encouraged to get to know one another. A previously silent hall erupted into conversation as people began to get past their differences. In the second exercise, community members walked around Albert Park, reflecting on the impact that the buildings, spaces and activities had on their current realities.

The residents noted how various buildings, like the churches and clinics, could act as building blocks in the process of social cohesion. There was overwhelming consensus that the park was an invaluable resource for improving social interaction in the community. One participant expressed the joy that the community could find in the park: “Unlike many townships, we have this beautiful park, where we can just go and sit and chat. This is where it all starts, getting to know your neighbour without fear. In this park you will hear people speaking in all languages [from all countries] without fear.”

Residents mapped the community into “green grass” and “dry grass” areas, indicating the difference between life-giving and risky spaces. The green areas are churches, libraries, clinics and various other community resources. The dry-grass areas include shebeens, brothels and drug dealers, generally areas that promote illegal activity.

A common observation among participants was the impact that the growth of dry-grass areas was having on communities’ ability to access the green-grass areas.

“You will see that sometimes it is difficult to attend church because it is on the higher floors [of a building] and the lower floors are surrounded by criminals and drug dealers,” one resident observed.

Another felt that “as long as we continue to see the growth of the dry areas, the green areas will soon come to an end. Look at what is happening to the park – these days you cannot walk there at night. We need the government to step in and restore order.”

The result of the conversation was a positive attitude among the community, and willingness to participate in a cultural exchange function with the support of the KZN Christian Council.

“We are here to talk, not for the sake of talking but to see how we can take our talk to action,” said one resident.

The participants saw the conversations as an important step towards building social cohesion. “If we learn to dialogue I am sure we can reclaim the status of Albert Park as a home for all,” concluded one. 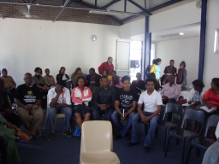 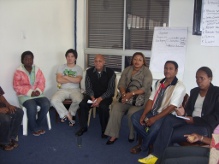 Albert Park community members get to know one another 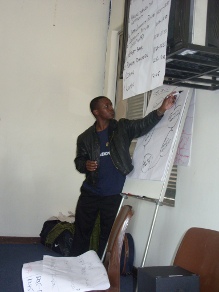