A reading of Ariel Dorfman’s Purgatorio was performed at the Baxter Theatre on July 24, 2010

July 27, 2010 – Ariel Dorfman’s schedule of activities as a lead up to the Eighth Nelson Mandela Annual Lecture, in Cape Town came to a close on Saturday, July 24, with an exquisitely performed reading of his play, Purgatorio (2005), by South African actors Morne Visser and Mbali Kgosidintsi at the Flipside at the Baxter Theatre. Claire Stopford directed the pair, who performed their reading after just a few days of rehearsal.

Stopford teaches at the University of Cape Town’s drama department and is best known for her direction of award-winning Lillian, about American writer Lillian Hellman. Visser is known for his roles in local television soap operas Isidingo and Scandal!, in the sitcom SOS as well as in feature films like Cape of Good Hope and the recently completed Retribution. Kgosidintsi is known in Cape theatre circuits for playing Hero in Much Ado About Nothing, Electra in Yale Farber’s Molora, and for being on the writing team that adapted The Magic Flute. Her one-woman show, Tseleng: The Baggage of Bags, won a Standard Bank Ovation Award at the National Arts Festival in Grahamstown this year.

“I can’t exaggerate how important Purgatorio has been in my recent existence,” Dorfman said in his introductory notes. “It goes to the very core of my work and my life, asking questions that have no easy answers.”

Purgatorio is a re-imagined follow-up to Euripides’ Medea. In the ancient Greek myth of love, revenge and betrayal, Jason sails from ancient Greece to Colchis to obtain the Golden Fleece and so ensure Greece’s prosperity. At Colchis, he meets priestess and sorceress Medea, who betrays her people to help him steal the Golden Fleece. She goes on to marry Jason and bear him two children. Upon their return to Greece, however, Jason leaves Medea and becomes betrothed to a Greek princess. As revenge, Medea murders their children.

“I had been wondering for a long time about the terrible things we humans do to one another, and how – indeed if – there can be some sort of reparation,” said Dorfman. “I wanted to take this out of the directly political arena and into the one-on-one relationship where lasting damage is done (because it always comes down to one human being facing another one, always starting there, often [ending] there).

“I particularly loved the challenge of writing a piece that transpires in the landscape of the mutual mind, meaning that what we are seeing is the place where two souls meet and fight and discover they will always be lonely and, simultaneously, that they will always have the other close by, waiting, twinned for eternity.”

Purgatorio shows a man and woman, who represent Jason and Medea, in purgatory, where they are each interrogated by a would-be liberator in turn, who has to decide whether the character is ready to pass on and return to Earth in a new body.

To complicate matters, however, identity is fluid in the play and it emerges that the man and woman are each other’s interrogators, blurring the lines between victim and perpetrator.

“I’m very excited about hearing [this play] in South Africa, a country that has been through so much pain and has been struggling against mendacity as much as it has against oppression. I think it will take on a deeper meaning with our Cape Town audience and artists,” Dorfman said.

The reading was attended by prolific writers and opinion shapers from Cape Town, including author André Brink and cartoonist Jonathan Shapiro, aka Zapiro.

After the reading, Dorfman said: “Seeing [Purgatorio] in South Africa is for me a real experience, because I’ve never seen it in the south, and of course it was written in the south. This is as far south as it’s got! I’m just very moved to see it and to see how extraordinary the actors are.”

“It’s not only about Medea and Jason, if we must give them a name,” he continued, “it’s also about colonial relationships. This is the story of all conquerors of all lands.”

Comparing the global process of reconciliation and accountability to the play’s trajectory, Dorfman said that, “In some sense the play begins when they recognise each other at the end; that’s when the work really starts.”

Dorfman asked the audience whether they picked up the political references in the play, which on a most basic level can be interpreted as a love story.

Zapiro commented: “All the resonances were there. I particularly felt the shifting allegiances [between the characters] and the [shifting] loyalty of the audience.” The interrogative slant of the scenes reminded him of the stories he’d heard about “what happened in political cells” during apartheid, he said.

Dorfman called Purgatorio a kind of “emotional sequel” to his play, Death and the Maiden. He posed the question: “What if there is no innocence in a group or a relationship? I wanted to look at the problematics of a society that is satisfied that everything is fine.”

Lara Foot, who serves on the board of the Baxter Theatre and who will take over as director at the end of the year, commented that the male character “goes on a journey of empathy through asking [the woman] questions.”

Dorfman said that he wanted to “emphasise Jason’s culpability” in the play and to show Medea as exile and outcast. “Her actions [the murder of her sons],” he said, “is how she affirms her existence.”

Continuing with the idea of reconciliation and forgiveness, which was discussed at length during the dialogue on July 24 at the Fugard Theatre – a debate that revolved around writing’s role in steering memory and reconciliation – Dorfman said: “The only way to achieve forgiveness is for both [victim and perpetrator] to recognise who they are … [this realisation] happens at the same time [in the play].

“I would hope the play gives you a safe space where [this realisation] happens mythically,” he said.

After the reading and comments session, Dorfman spent time talking to attendees over coffee and tea. He signed many books and bid a fond farewell to Cape Town. Dorfman is heading via the Eastern Cape to Johannesburg for a series of events before delivering the Eighth Nelson Mandela Annual Lecture on July 31, 2010 at the Linder Auditorium.

Ariel Dorfman on stage with Claire Stopford who directed the reading 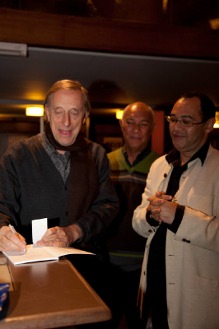 After the reading Ariel Dorfman did a book signing