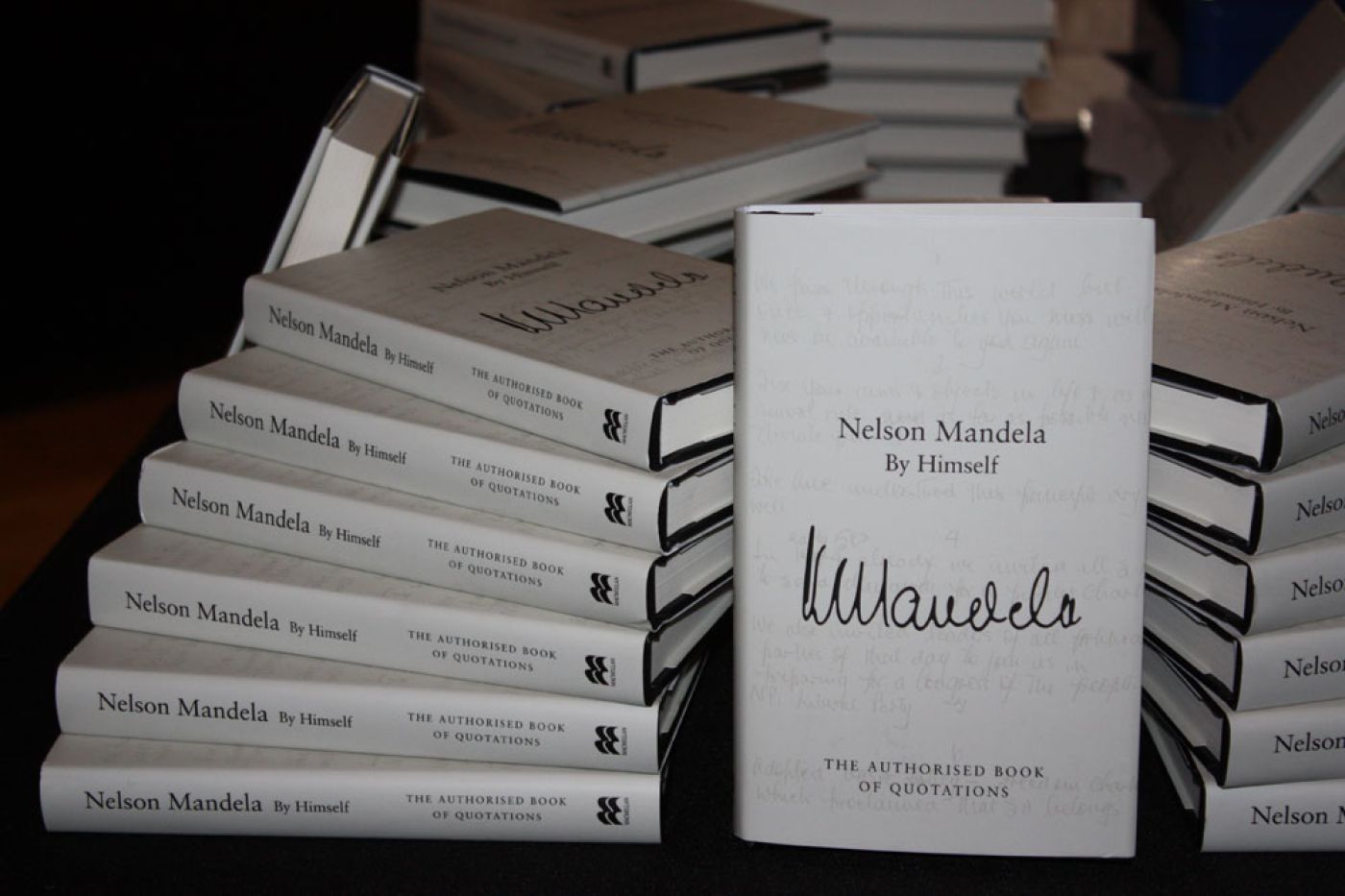 Copies of Nelson Mandela By Himself: The Authorised Book of Quotations,>

Nelson Rolihlahla Mandela is one of the most quoted – and misquoted – people in the world. This is ironic given that for much of his adult life he could not be quoted at all.

In South Africa, quoting Mandela carried with it the threat of a criminal record and a possible prison sentence. Under the apartheid regime, people who were banned or imprisoned could not be quoted, and Mandela was successively banned from December 1952 and was in custody from 5 August 1962 until 11 February 1990.

Of course the words of an accused uttered in open court were exempt from this restriction, and the words he spoke at his October–November 1962 trial and his famous speech from the dock at the Rivonia Trial on 20 April 1964 were quoted in the media.
Despite this exemption, people still feared quoting him. The final words in his four-and-a-half-hour-long speech at the Rivonia Trial have become the stuff of legend in the history of the struggle against apartheid:

During my lifetime I have dedicated myself to this struggle of the African people. I have fought against white domination, and I have fought against black domination. I have cherished the ideal of a democratic and free society in which all persons live together in harmony and with equal opportunities. It is an ideal which I hope to live for and to achieve. But if needs be, it is an ideal for which I am prepared to die.

These words characterise the essence of Mandela and his comrades’ courage, commitment and leadership in the struggle to end apartheid.

In the quarter-century following the end of the trial on 12 June 1964, a silence born out of fear more or less hung over the name Nelson Mandela within South Africa.

For decades it was uttered virtually only in secret or in defiance of the increasingly repressive tactics of the apartheid regime and its agents. Some of his words were smuggled out of prison and released by the African National Congress (ANC) in exile, but Mandela had effectively been silenced.

The silence was broken when, speaking from the balcony of the Cape Town City Hall on Sunday 11 February 1990, the newly released Mandela addressed a crowd of thousands of supporters, who had gathered on the Grand Parade to hear his voice, and an audience of millions through television and radio:

Friends, comrades and fellow South Africans, I greet you all in the name of peace, democracy and freedom for all. I stand here before you not as a prophet but as a humble servant of you, the people. Your tireless and heroic sacrifices have made it possible for me to be here today. I therefore place the remaining years of my life in your hands.

This time the whole world heard and read his words and he continued to be widely quoted. His words were publicised internationally: during the period in which he was locked in negotiations alongside his comrades for an end to white minority rule; when he was campaigning for South Africa’s first democratic vote; upon his election and inauguration as president; during his travels through South Africa, Africa and the world; when he was carrying out his charity work; and upon his various retirements.

Even long after his official ‘retirement from retirement’ announcement on 1 June 2004, when he famously said, “Don’t call me, I’ll call you”, we, at the Nelson Mandela Centre of Memory, still process thousands of requests for the authentication of quotations.

We found that many of these, often lifted from websites purporting to contain accurate information about Mandela, were not correct. One of the main ‘quotes’ by which Mandela is misquoted contains, in actual fact, the words of American author Marianne Williamson from her book A Return to Love: Reflections on the Principles of a Course in Miracles. She wrote: “Our deepest fear is that we are powerful beyond measure.” This quote, and especially Williamson’s closing words, “As we are liberated from our own fear, our presence automatically liberates others”, are often incorrectly credited to Mandela.

Our aim in producing this book, therefore, was firstly to provide an accurate and extensive resource for the public and secondly to document in one collection a significant range of Mandela’s quotes. The result is a collection of more than sixty years of quotations. In editing this book we were struck as much by the gravitas of his words – expressed when he was facing the death sentence in 1964 and in struggles against apartheid – as by their simplicity.

We were moved by the way in which his words directly link to his values and principles and these are what make Nelson Mandela one of the most loved and admired individuals of the twenty-first century. He chooses his words deliberately, he means what he says and he wants his audience to easily grasp their meaning. As he said on 14 July 2000:

It is never my custom to use words lightly. If twenty-seven years in prison have done anything to us, it was to use the silence of solitude to make us understand how precious words are and how real speech is in its impact on the way people live and die.

His emphasis on the importance of connecting with an audience through the clarity of words is further demonstrated by this quote from a speech he delivered on 21 September 1953:

Long speeches, the shaking of fists, the banging of tables and strongly worded resolutions out of touch with the objective conditions do not bring about mass action and can do a great deal of harm to the organisation and the struggle we serve.

Of course Mandela is also well known for his sense of humour and his ability to find amusement in even the most challenging circumstances. Frequently during our research we came across him making very amusing remarks. In 2005 he explained the value he placed on humour:

You sharpen your ideas by reducing yourself to the level of the people you are with, and a sense of humour and a complete relaxation, even when you’re discussing serious things, does help to mobilise friends around you. And I love that.

We have selected more than 2,000 quotations from many thousands more to create sixty-three years of thoughts and sentiments by Mandela. The quotations have been divided into 317 categories within which they appear in chronological order, providing an interesting insight into how his ideas evolved and in many cases remained the same.

For example, the following quotations on the principle of non-racialism delivered in 1964 and 2005 respectively:

We of the ANC had always stood for a non-racial democracy, and we shrank from any action which might drive the races further apart than they already were.

I hope that our movement will always hold that commitment to non-racialism dear in its thoughts, policies and actions. It is that commitment, even in circumstances where we could have been pardoned for deviating from it, that amongst other things earned us the respect of the world.

Quotations have been selected from his speeches as far back as 1951, recorded interviews from before he was sent to prison, letters dating back to 1948, diary extracts including from his 1962 trip to Africa and the United Kingdom, as well as impromptu remarks, among others. We have, in the main, used full quotations and have provided citations in each case.

We can all honour Nelson Mandela by quoting him correctly and accurately and by recognising the contexts within which his words were uttered.